This is Heavy! Tom Holland and Robert Downey Jr. Star in Back to the Future Deepfake Video: Watch 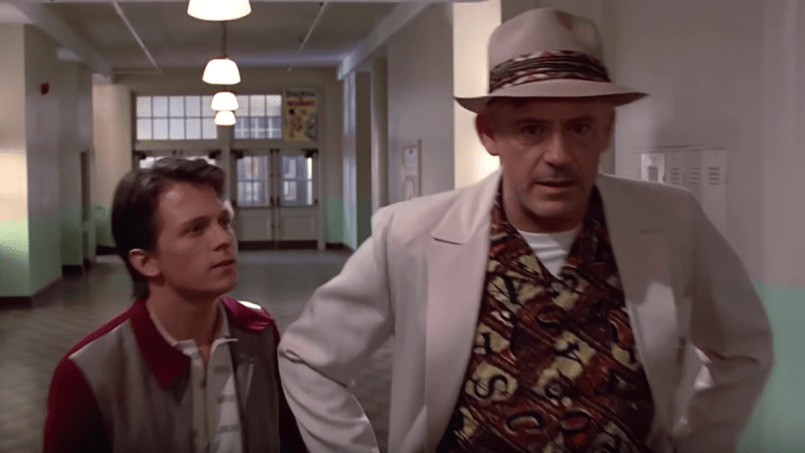 "Tom Holland" and "Robert Downey Jr." in Back to the Future Deepfake, via YouTube/EZRyderX47

It’s important to remember in this age of reboots and decades-later revivals that some films should remain untouchable. They are just such perfect products of their time yet so utterly timeless that there’s no need to revisit them in any form other than their original. (Except maybe a musical, ’cause why not?) That said, if Hollywood were to defy Robert Zemeckis’ own wishes and remake Back to the Future, a new deepfake video proves there could be worse casting out there than Tom Holland and Robert Downey Jr.

The viral clip comes from YouTuber EZRyderX47, a digital artist specializing in the creepy technique of deepfake. Essentially, the method involves using high-tech software to replace one person’s face with another’s. The potential malicious uses of such technology is breathtaking, but EZRyder is currently just using the skill to build followers and have a bit of fun.

Their latest video inserts Marvel Cinematic Universe co-stars Holland and Downey Jr. into the respective roles of Marty McFly and Doc Brown. Funnily enough, both actors look rather built for the parts. Of course, the voices are still those of Michael J. Fox and Christopher Lloyd, so it’s impossible to know if they’d bring the same flavor to the characters. In terms of physical embodiment, though, this feels oddly spot-on.

This actually isn’t the first time EZRyderX47 has done the Fox-Holland swap. He first put the Spider-Man actor in Back to the Future in September, and tried his hand (perhaps less successfully) at placing Fox into Spidey’s Far From Home webs in December. Watch all the videos below.