Fischer said the message made her "start bawling" 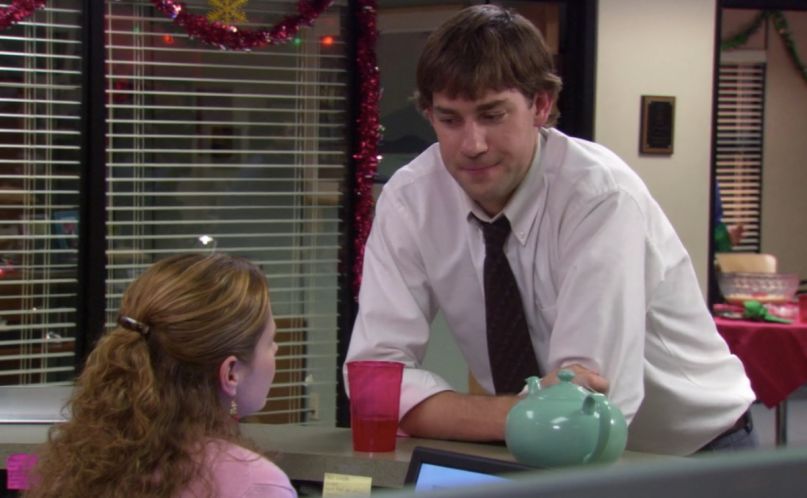 The Office aired its series finale nearly seven years ago, but diehard fans are still mulling over a number of unanswered questions. One of those likely has to deal with the mysterious “teapot note” Jim Halpert (John Krasinski) gifted Pam Beesly (Jenna Fischer) in the second season. A decade and a half later, we finally have an answer.

In a recent episode of the podcast Office Ladies, co-hosts (and former co-stars) Fischer and Angela Kinsey discussed the memorable episode in question, “Christmas Party”. In the 2005 episode, the Dunder Mifflin coworkers have a Secret Santa holiday party. When Michael (Steve Carell) forces everyone to trade presents “Yankee Swap”-style, Dwight (Rainn Wilson) mistakenly ends up with Jim’s gift intended for Pam, a teapot stuffed with charming jokes and a card. He eventually gets the present back to Pam, but pulls the card before she can read it.

The note doesn’t appear again until seven full seasons later, in season 9, episode 22. “There’s a scene where Jim has the documentary film crew put together footage of their romance, and he shows it to Pam. Pam sees that there was a note Jim steals back, then he hands it to her and she reads it,” Fischer explained around the 1:04:00 mark of the podcast. She continued, “I’m going to say something that I’ve never said before, I also feel like I’m maybe going to cry, sort of. I’m the only one who knows [what was written in the note] and John knows.”

According to Fischer, series creator Greg Daniels suggested Krasinski write a real note to his co-star, “a personal message from himself to me just saying what our time together on The Office meant to him, because we were wrapping up filming,” she shared. “We were wrapping up the series and we were all so emotional at that time, you know? And so that was his goodbye.”

When we see Pam finally read the card on the show, it turns out the expressed emotions were really Fischer’s. “So I’m on camera and I open up this note that John’s written me and I just start crying, I just start bawling. The first take was probably not usable,” she explained. “It was the sweetest note and you know on camera Pam says, ‘I’ll never say what it said but just know it was perfect?’ Well I’ll never say exactly what John wrote, but I will say just know it was perfect.”

For Fischer, it wasn’t unlike the real feelings of saying goodbye to Carell in the moving season 7 episode “Goodbye, Michael”. “Very similar to when we filmed that scene with Steve where I said goodbye to him at the airport and Paul Feig told me, ‘just run up and say goodbye to your friend Steve,'” she explained.

So it turns out we may never know exactly what the teapot note really said verbatim, but we know the sentiment, and it’s one that’s already created a lasting impact, with the teal teapot as its symbol.

“They nailed it right? I mean, this teapot is famous… all the time people are using this teapot idea to propose to their loved ones,” Fischer remarked. “I see it on my Instagram People are always tagging me and it’s always charming to me.”

Check out the full podcast episode below, and go revisit The Office episodes on Netflix before the series jumps off the platform in 2021. In other nostalgic Office news, the full version of Michael Scott’s Threat Level Midnight is available to stream.