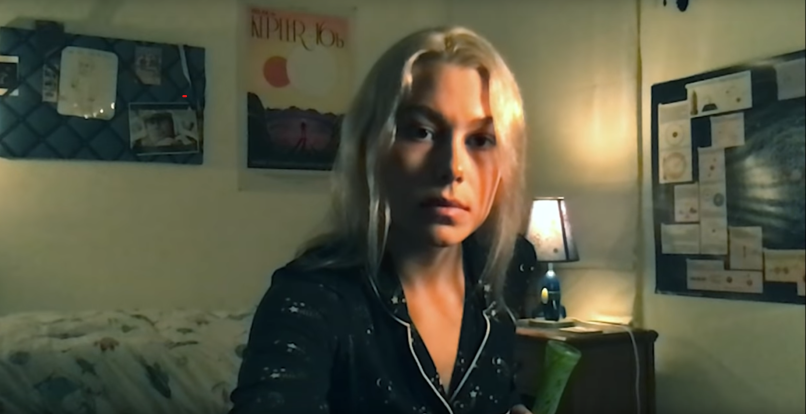 Sinéad O’Connor was around Phoebe Bridgers’ age when she assured us that she didn’t want what she hadn’t got. And on the first single from her upcoming second solo album, Bridgers’ sigh echoes O’Connor by dripping with contentment rather than contempt: “I have everything I wanted.” It’s a believable denouement to not just a video that begins with a fat bong rip but an eventful trajectory in which she only starts bands with other rock stars: The massively acclaimed boygenius, with peers Julien Baker and Lucy Dacus, and the less obvious Better Oblivion Community Center, with veteran Conor Oberst. Her own Strangers in the Alps blew up, too, along that timeline.

But you can’t take complexity out of the songwriter, whose celebration on “Garden Song” only begins when a skinhead neighbor goes missing. The static loops of guitar and sizzling tape hiss mirror the fractious memories she tries to tape back together like photographs with pieces still missing: a flatbed truck with a thousand roses glued to it, a house burned down “except the notches in the door frame.”

Bridgers wastes no words here detailing her journey to happiness in total impressionism: how the doctor can chart her resentment in her liver, how she dreams of a movie screen that becomes a tidal wave and then a hedge maze. For all the lost imagery, she’s definitely found by the end, clarifying: “No, I’m not afraid of hard work.” However, given her last few years, we already knew that.

For Fans Of: Introspection’s back in style, so fans of dorm-room folkies from Soccer Mommy to Bright Eyes can find something to enjoy on “Garden Song”. Maybe even admirers of latter-day, glassy-eyed Paul Simon, who’s got some similarly backwards electronics shifting about in the background.

Best Moment: Who knew the sad-eyed Bridgers had a line as funny in her as “When I grow up/ I’m gonna look up from my phone?”

Where to Go From Here: The Phoebe Bridgers discography got prolific fast, with Alps, the boygenius EP, and Better Living Community Center all standing tall in the public eye since only 2017. Soccer Mommy’s great debut, Clean, comprises similar dreamlike murmurs of occasional, bittersweet sexual awakening, and Paul Simon’s 2011 late-career high, So Beautiful or So What, is a bigger parallel than you’d think on the abstractions of aging.

Other Great Songs This Week: The Magnetic Fields will never let you down, and far too many of us can share the catharsis of “The Day the Politicians Died”, featuring the immortal new Claudia Gonson rallying cry, “Let’s eat all the priests.” Fellow exemplary New Yorker Princess Nokia introduced her two(!) new albums with the surprisingly funky throwback “Green Eggs & Ham”, which declares love for her parents while making three whole lines of “fuck these cops.” Car Seat Headrest returns with the addictive “Can’t Cool Me Down”, which promises a more directly hooky-to-the-gut direction of synth minimalism than the airy new Tame Impala album.