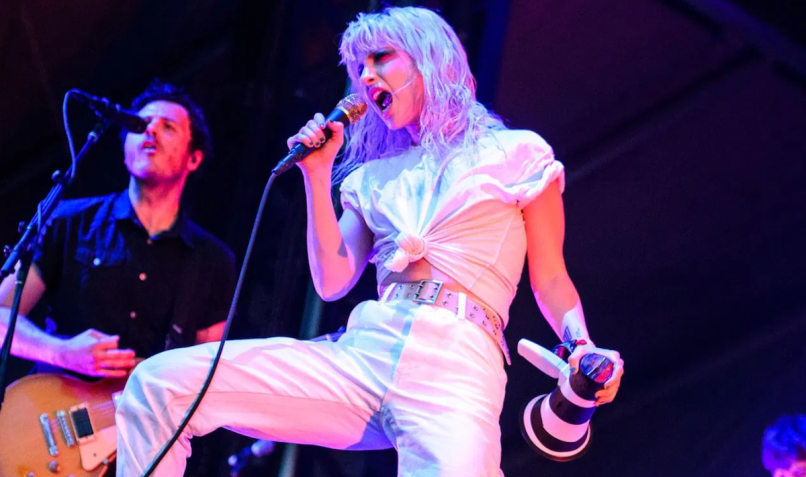 For longtime Paramore fans, a Hayley Williams solo album might actually be kind of sad. No matter how aware the world was that Paramore and its constantly shifting lineup was the Hayley Williams show, Williams made a point of insisting, even on t-shirts you could buy, that “Paramore Esta Una Banda.” Like Taylor Swift or Billie Eilish, she got her first record deal at a young age, 14. But instead of taking that route, she wanted a rock band more than anything, and she always defended the fact that her unit mattered as much as their frontperson.

So what really matters about her upcoming Petals for Armor is that its now-five pre-release singles don’t sound like Paramore in any way, and that seems to be a good enough reason for Williams to be releasing this material under her own name. For all her onetime pop-punk outfit’s stylistic curveballs — homages to Fleetwood Mac and Best Coast (“In the Mourning” and “(One of Those) Crazy Girls”, respectively), ’80s dance-pop, and Talking Heads on 2017’s After Laughter — they also hit squarely as disciplined, chart-ready arena-rock. The upcoming Petals for Armor is going to be further away from her prior output than any of those was, by miles.

Yesterday’s triad of new singles was indicative: “Sudden Desire” has the biggest chorus, and “Creepin’” finds her trying on a haunted new head-voice register that makes clear that Eilish, once compared to Lana Del Rey and Lorde, has now imbued the existing pop landscape with her own inflections for the establishment to imitate. But “Cinnamon” is the most interesting of the bunch and easily the most avant-garde thing Williams has ever done. You would not be blamed for thinking it’s Annie Clark, moaning and twisting her voice into jazzy shapes with odd places for rests and spaces over a jagged rhythm that, frankly, makes no sense. It’s thrilling to hear a killer pop-rock queen yanking our chain with legitimate strangeness, even if the song does settle into a shuffling, danceable groove well before it concludes.

For Fans Of: St. Vincent, Billie Eilish, even the clicky, swinging rhythms of Thom Yorke’s ANIMA or (seriously) Esperanza Spalding.

Best Moment: The entire first minute of “Cinnamon”, as an entirely new side of Hayley Williams wraps herself around the completely psychedelic sensation of a halting, jarring beat that, measure after measure, can’t decide what it wants. She nonchalantly finds her way into this chaos.

Where to Go from Here: Paramore’s best music — “That’s What You Get”, “Hard Times”, “Hello Cold World” is spread across multiple albums, but the crunching fervor of 2009’s fiery Brand New Eyes may still be Williams’ most impressive and hardest-rocking collection. It’s not hard to see why she’s looking around hungrily for other sounds she can conquer a decade on.

Other Great Songs This Week: The well-loved Christine and the Queens hit a new peak this week with a gorgeously sparse synth-pop anthem whose title and premier lyric speaks to what much of the world’s been feeling: “People, I’ve Been Sad”. Smoky-voiced country-rock legend Lucinda Williams has returned with the Trump-excoriating “Man Without a Soul”, a heavy, droning burn notice for the recently impeached. BIB’s grunge rager “The Fool” hits like a brick to the tooth, and on the opposite end of the spectrum, ambient soundscaper Jon Hopkins has debuted the gorgeous, glitch-free piano instrumental “Scene Suspended”.