Top Song of the Week 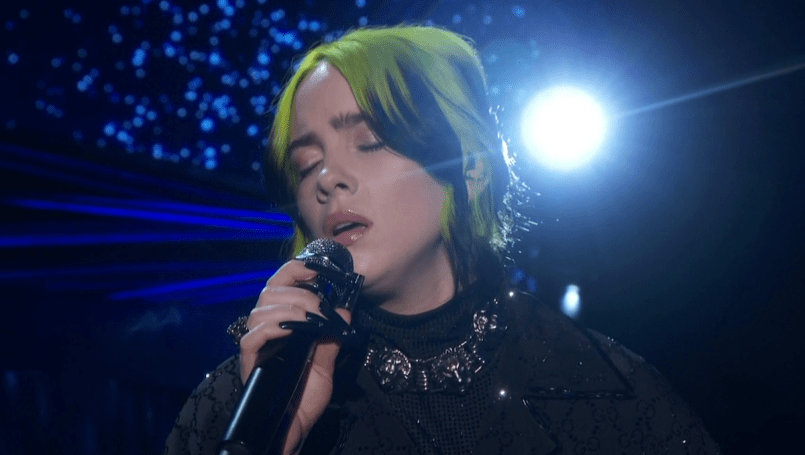 Billie Eilish at the 2020 Academy Awards

Billie Eilish is having a year. And it’s only February. Apprehensively overwhelmed at the Grammys, where she took home all four of the night’s biggest trophies, she still acquiesced to performing at the Oscars. And good for her. Her audacious rendition of The Beatles’ “Yesterday” played to all of her haunted strengths, a big improvement on the pinched and nervous performance of album highlight “When the Party’s Over” that she did at the Grammys.

Then yesterday, she dropped her long-awaited James Bond theme, “No Time to Die”, from the upcoming movie of the same name, and it shares its slow-burn piano ballad arrangement with those award show performances. So, we enter the next phase of the now-18-year-old singer’s career, giving her obviously antecedent Lana Del Rey a run for her money as a ghostly torch singer.

“The blood you bleed is just the blood you owe,” Eilish sings with a typical dolor beyond her years on what’s ostensibly both her sparsest and grandest production. Beginning with almost no adornment but the lightest-plinked keys, “No Time to Die” is in the great tradition of Bond themes you can always count on to curl your favorite pop star’s voice towards something minor-key and ominous, if a few touches less bombastic than Chris Cornell and Garbage’s excellent contributions to the franchise.

For Fans Of: If you loved Del Rey’s Norman Fucking Rockwell! last year, or especially 2015’s even more smoldering Honeymoon, you should be paying attention as Eilish’s music and her brother Finneas’ arrangements ascend towards mountainous orchestral territory. Even Scorcese would agree this is cinema.

Best Moment: Blink and you’ll miss when the song switches from nearly nonexistent accompaniment to full, curtain-up strings around the two-minute mark, but that surprisingly light touch and aural sleight of hand is what Billie’s own use of negative space and Finneas’ outstanding studio abilities are known for.

Where to Go from Here: Chances are, you’ve already heard Billie’s now astronomically successful 2019 debut full-length, When We All Fall Asleep, Where Do We Go?, so maybe you’ll want to catch up on her word-of-mouth earlier EP Don’t Smile at Me, still pretty quality for an upstart developing a sound in her teens. Then there’s last year’s other soundtrack one-off “When I Was Older”, another high-end dirge with a spooky glow to it. And why not? Go listen to Garbage’s peak-era creep-ballads again: “You Look So Fine”, “The Trick Is to Keep Breathing”, and the positively You-ready “#1 Crush”.

Other Great Songs This Week: Kenny Beats and Denzel Curry’s “Lay Up” from their surprise release UNLOCKED is one of the meanest little snippets from either party: “You’s a plain bitch/ Body shame, game aimless, intense/ Surfboard body-ass boy with your fish tits.” Grimes’ sweet, country-ish acoustic shuffle “Delete Forever” is the most promising preview of next week’s long-awaited Miss_Anthropocene to date. The Melbourne- and NYC-based hardcore band Soakie released many pointed ragers on their eponymous debut EP this week, but “What’s Your Gender” probably spits the most blood. And finally, The Strokes’ best tune in years, “At the Door,” is a minimalist synth epic with no drums. It could be a Voidz song if it threw in a random reggae chorus for no reason!