Scooby-Doo Is Going on Tour With Björk’s Costume Designer 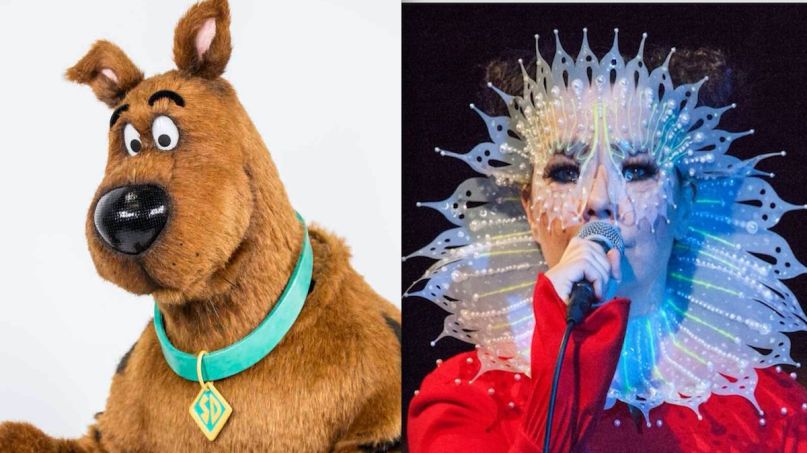 Scooby-Doo is going on tour, and he’s ready to put on one hell of a show. While the beloved great dane will be wearing his usual teal collar, he’s tapping Edda Gudmundsdottir, Björk’s costume designer, to outfit his pals for the event, as BrooklynVegan points out.

The upcoming tour, dubbed “Scooby-Doo! and The Lost City of Gold”, will see the gang singing and dancing alongside music, puppetry, magic, aerial arts, video mapping, and interactive audience response video. Apparently it follows Scooby-Doo, Shaggy, Daphne, Fred, and Velma as they drive the Mystery Machine to Alta Luz, “a fictitious South American town where ghostly sightings of La Dama de Oro (The Lady In Gold) threaten to scare attendees away from the annual music festival and Incan sun god celebration.” Jinkies!

According to the event’s website, Edda Gudmundsdottir is the tour’s official costume designer. Gudmundsdottir and Björk grew up together in Reykjavik and quickly became friends, with Gudmundsdottir going on to style Björk for numerous tours and events over the years. Her resume also includes past clients like Taylor Swift, Katy Perry, Maroon 5, and Imagine Dragons. In a behind-the-scenes video, the outfits appear to be influenced by traditional Incan designs, Scooby-Doo’s original look, and some very colorful sea creatures.

“Scooby-Doo! and the Lost City of Gold” kicks off in Halifax, Nova Scotia on March 19th and stays on the road for quite a long time before concluding the adventure in Jacksonville, Florida on June 28th. In between, the gang will stop frequently throughout North America, including in major cities like Milwaukee, Austin, New York City, New Orleans, Nashville, and Orlando.

Will Björk turn up at the New York City date to see her pal’s work? Who’s to say. If Björk does decide to go, there’s a good chance she will crash at Sister City, the boutique hotel she composed AI-influenced lobby music for recently.

Tickets for “Scooby-Doo! and the Lost City of Gold” are on sale now. So grab your magnifying glass, pack some Scooby Snacks, and purchase tickets to any of the shows here.