Watch This Insane Timelapse Video of Rammstein’s Stage Being Built 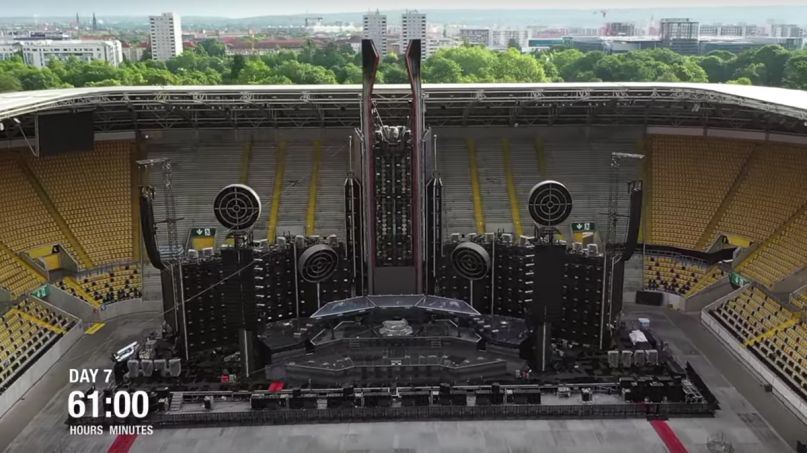 Rammstein’s stage setup is no joke. The German industrial metal act shared a timelapse video that shows just how much work goes into constructing the massive structure.

Shot over the course of a week prior to a show in Dresden, Germany, the video depicts the gargantuan stage being erected from scratch. It includes tall spires, numerous lights, glass overhangs, walls of half-stacks, and many other physical embellishments. In all, it takes over 400 people work on the setup, tear down, transportation, and management of a Rammstein stadium show.

“Going into stadiums, you can only bring in about 10 trucks at a time, so you have to make sure you bring in the right one at the right time for what it’s got in it, that there are enough people around,” Rammstein lighting director Roland Griel told Kerrang!. “I think they’ve got the load out down to four and a half hours now. Then they get in the trucks and drive 500km to the next show. Then they load all the pyro and lights, which takes about eight hours. Repeat that until the tour is over!”

It’s pretty damn decadent, but we should expect nothing less from Rammstein. After all, frontman Till Lindemann does have a penchant for excess — he just released a full-on pornographic music video for his side-project — and the band’s recent European tour saw it playing some of the biggest stadiums and arenas of their career, demanding grander concert production.

For the first time ever, Rammstein will be making a similar stadium trek across North America this summer. The video below should give fans a glimpse of what to expect. You can get tickets to those shows here.