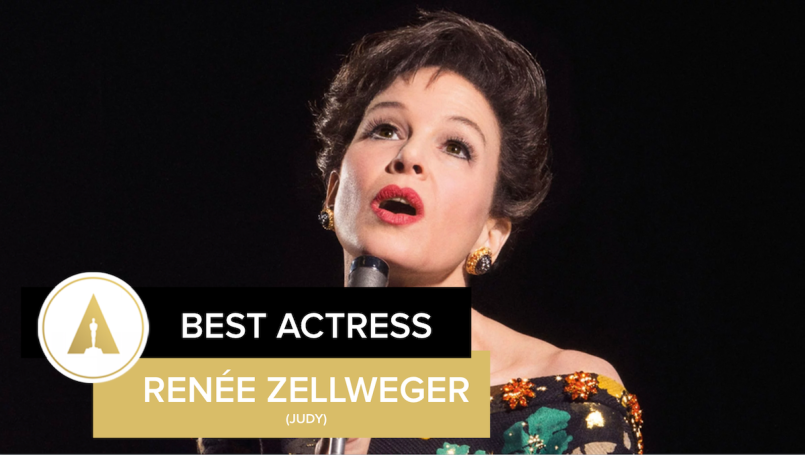 Renée Zellweger has won Best Actress at the 2020 Academy Awards for her performance as legendary Hollywood icon Judy Garland in Rupert Goold’s Judy. Follow our complete winner’s list for an update on all the night’s victories.

After sweeping the Golden Globes, BAFTAs and SAG Awards, Zellweger was a lock for the night, and she sang right by Scarlett Johansson for Marriage Story, Cynthia Erivo for Harriet, Saoirse Ronan for Little Women, and Charlize Theron for Bombshell.

This is Zellweger’s first win for Best Actress after previously being nominated in this category for 2001’s Bridget Jones’s Diary and 2002’s Chicago. This is her second Oscar, however, following her win for Best Supporting Actress in 2003’s Cold Mountain.

In her speech, she addressed how celebrating Judy Garland in the film was “a reminder that our heroes unite us.” She continued,

“The best among us inspire us to find the best in ourselves. They unite us. When we look to our heroes, we agree, and that matters. Neil Armstrong, Sally Ride, Dolores Huerta, Venessa and Serena and Selina, Bob Dylan, Scorsese, Fred Rogers, Harriet Tubman. We agree on our teachers. We agree on our courageous men and women in uniform who serve. We agree on our first responders, and firefighters. When we celebrate our heroes, we’re reminded of who we are as one people united.”

The night’s other big winners included Brad Pitt for Best Supporting Actor, Laura Dern for Best Supporting Actress, and Joaquin Phoenix for Best Actor. Bong Joon-ho’s Parasite had a monumental sweep of the evening, becoming the first international film to win Best Picture and only the second to take home Best Director. It also scored trophies for Best Screenplay and Best International Feature Film. Find all the winners and performances here.

Zellweger experienced quite a comeback in 2019. In addition to her award-winning role as Garland, she also top-lined Netflix’s thriller series, What/If. Looking ahead, the future is wide open for the two-time Oscar winner who has no current projects.