From his upcoming double album græ 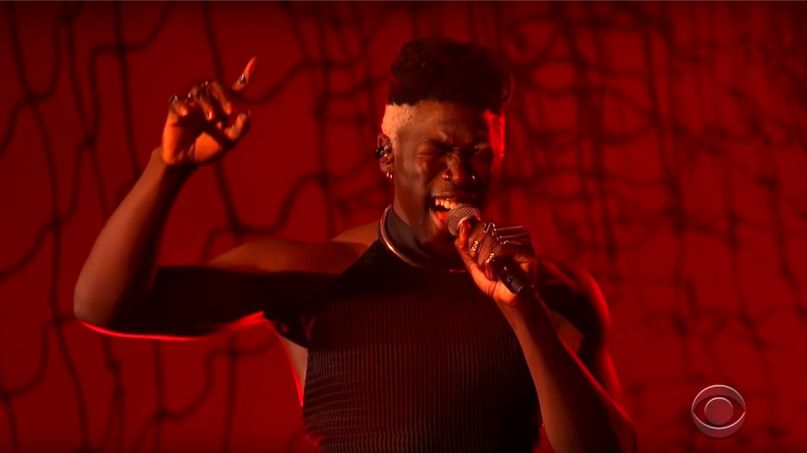 Moses Sumney is ready to level up with græ, his upcoming double album, and he flaunted his bigger persona when he performed “Cut Me” on Tuesday night on Late Show with Stephen Colbert.

The art-rock singer-songwriter blew us away with his debut album, Aromanticism, in 2017 and then drew us back in for more with his Black in Deep Red, 2014 EP in 2018. It looks like græ will continue that momentum as the album nobody can look away from it, or at least not his performances of its songs.

On Colbert, Sumney demanded attention for his impressive vocal performance as well as his onstage aura. Backed by a sea of instruments like trombone, trumpet, and viola, Sumney played into the flair of the song, emphasizing each enunciation of the title in the chorus and drawing out notes elsewhere. At one point, he tossed off his glittery cape and took over the piano, delivering a brisk interlude.

Watching this performance, it’s hard to imagine Moses Sumney won’t bring these new songs out on tour. After all, he’s already scheduled to play live at iii Points in May. Grab tickets to all of his as-yet-announced upcoming concerts here.

græ will be released in two parts. The first installment features 12 songs, including previously released singles “Virile” and “Polly”, which will come out later this month. Part two spans eight songs, one of which is “Me in 20 Years”, and is scheduled to drop on May 15th, the album’s physical release date.

Last week, Sumney shared a video of himself performing “Conveyor”, another new græ song, at the Moog Sound Lab in Asheville, North Carolina. He stopped by to welcome the return of the Moog 16 Channel Vocoder, which the company announced that afternoon. With a full band accompanying him, he got to use the new vocoder to help process his voice on the track, eventually looping it as his band built a hypnotic, rhythmic beat that feels equal parts digital and human. Watch the magic unfold below.