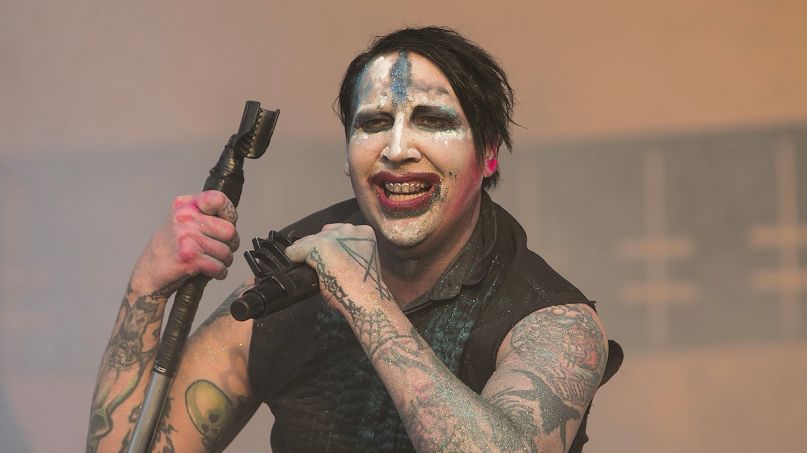 Marilyn Manson previously said that his forthcoming new album would “definitely” come out in 2019. The year came and went without a new album, but we did get two new cover songs from Manson. Now, it appears he’s teasing more new material — possibly his anticipated 11th studio album.

The shock rocker posted a cryptic image on Instagram of a frequency waveform, captioned with the Latin phrase: “Omnes surdus es et nunc audite me…” It translates to “All deaf and now you hear me,” which sure sounds like an insinuation that new music is on the way.

Always one for dramatic style, it fits Manson’s M.O. The post also includes some intriguing hashtags: “#everyonewillsuffernow #blacksabbathbornagain #antichristsuperstar #2020 #youhavenoideawhatiscoming”. Born Again was Black Sabbath’s 1983 album while Antichrist Superstar was Manson’s own 1996 album, considered by many to be his crowning achievement.

Even though the album didn’t come out in 2019, Manson’s been busy. He released versions of the American folk standard “God’s Gonna Cut You Down” and The Doors’ epic “The End” last year. He also offered a pretty clear vision for the new album’s themes and likely eponymous title. The LP is being produced by outlaw-country artist Shooter Jennings.

“It’s still to be determined, but I think it’s the album that should be called Marilyn Manson,” Manson told Revolver last summer. “I’m in a mode in life where I wanted to tell stories with this record, and it’s sort of like a wax museum of my thoughts, a study of the chamber of horrors in my head. … I tried to paint it with words.”

With Manson’s tour with Ozzy Osbourne now canceled, perhaps he’ll have time to put the finishing touches on the follow-up to 2017’s Heaven Upside Down. See the Instagram post below.