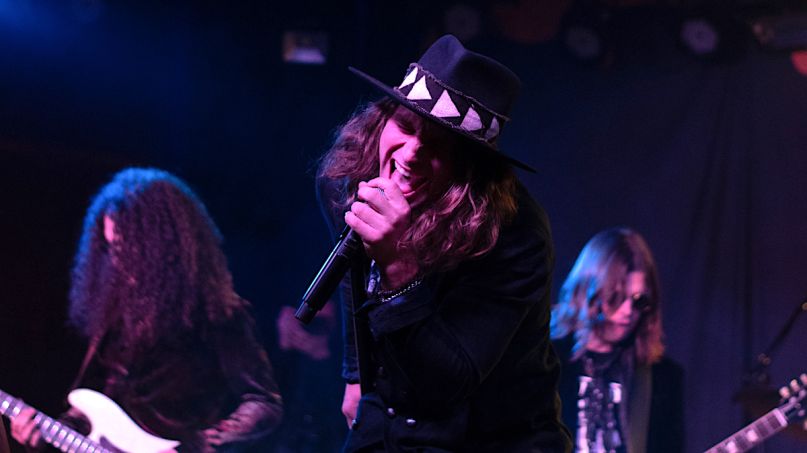 Dirty Honey have experienced some big highs in a relatively short period of time. The Los Angeles-based blues rockers issued their self-titled debut EP in March 2019, and since became the first unsigned act to top the Billboard Mainstream Rock chart with their single “When I’m Gone”. They’re now climbing the charts again with the song “Rolling 7s”, which also serves as the name of their current headlining US tour.

The tour stopped at the Knitting Factory in Brooklyn, New York, for a sold-out show on Wednesday night (February 5th). UK rockers The Amazons served as the opening act, and displayed a good deal of swagger on their first tour of the United States. Frontman Matt Thomson displayed some powerful guitar work and dynamic vocals, as The Amazons supported their 2019 album, Future Dust. The band closed out the 45-minute set with the song “Black Magic” off their self-titled 2017 debut album, with Thomson expressing his desire to return to the States again.

Dirty Honey then took the stage for their set, with frontman Marc Labelle pausing early on to talk about going from opening up for huge acts like Slash to playing their own headlining U.S. tour. The band’s blend of rock and blues came together seamlessly in their performance. After jamming through the song “Heartbreaker”, everyone but drummer Corey Coverstone left the stage, leaving him to rumble his way through a booming solo. As the set progressed, guitarist John Notto and bassist Justin Smolian shredded through their own solos respectively.

Overall, Dirty Honey’s show felt like a throwback to hard-rock titans like Led Zeppelin and Aerosmith. Labelle even sported a vintage Aerosmith tee during the gig, as his impressive vocals and boisterous stage presence combined for a truly memorable performance. Along with their hits “When I’m Gone” and “Rolling 7s”, the set featured some yet-to-be-released songs. Dirty Honey even threw in covers of Zeppelin’s “Whole Lotta Love” and Aerosmith’s “Last Child”, the latter of which they recently recorded, earning praise from Aerosmith bassist Tom Hamilton.

Both bands are welcome rock throwbacks with a dash of new school flair. The tour continues through a February 28th gig in Los Angeles. See the full itinerary at Dirty Honey’s website, and check out our photos and the setlist from the Brooklyn show below.

Photo Gallery: Dirty Honey and The Amazons at The Knitting Factory in Brooklyn (click to enlarge and scroll through):

All photos by Oliver Peric