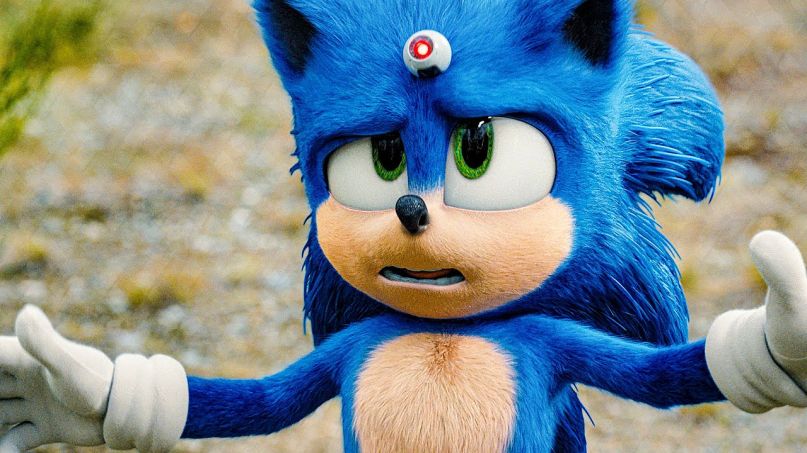 The Pitch: When I was a kid, I used to watch other kids play video games more than I ever played them. I wasn’t very skilled or cool under pressure. I didn’t own a Sega console, so I never got high scores on Sonic The Hedgehog. I did, however, admire the steadfastness of the premise. He speeds through obstacles, collecting seemingly arbitrary rings. At its best, the game encouraged us to become pure momentum, which in microcosm is the joy of video games in general — total escape from reality at the speed of sound with the pleasing melody of his collecting rings the only reward you needed.

Fittingly, I didn’t get invited to see the new film adaptation ahead of time as press. I had to walk into a theatre looking hungover and unwashed at 11:00 a.m. to stare at a man who’d been awake for hours and say, “one for the 10:50 a.m. Sonic The Hedgehog.” Hearing yourself say it, in your own 30-year-old voice … it stuns you a little. The man behind the glass smiled through his evident discomfort in helping me achieve this Sisyphean task. “Just to let you know, there’s a school group in there … at the 10:50.” “Uhh, sure. Whatever.”

The man then paused as the computer did something. “…do you come to the movies often?” I’d never been asked this by an employee at a movie theatre. “When work dictates.” “Work, sure. Do you come to this theatre often?” “Yeah.” “Oh, looks like my computer froze, hang on.” I’m getting the sense that this man does not want me in the theatre with the school group. He reboots the system or something, then he tries another computer. “Hey look, I don’t want to see the movie, I’m here to review it and I don’t want to miss the opening, can I just use one of those self-serve kiosks?” “I guess…? You could?”

The Phone Rings: “Mom, Dad, it’s Jeff! Listen, I have something cool to share! I finally got a job directing a feature! I know! I’m like … beside myself, I can’t handle it. I know … the Oscar nomination was like 15 years ago, I was starting to give up hope. I know. What is it? It’s uhh Sonic The Hedgehog. Yeah, the video game. Remember, I used to play it all the time when I was a kid, you’d tell me to do my homework. I know, I laughed when they offered it to me. I was like ‘Oh man I’m gonna rub this in their face so hard!’ Turns out video games were good for me. What? Oh I said ‘turns out video games were good for me.’ Well no, because there’s … I mean like it’s not just a kid’s movie, you can do cool stuff with it. Like remember Speed Racer? No, the movie, they made a movie out of Speed Racer like 10 years ago. We saw it over Christmas, remember? Oh, well it was cool and like … kind of subversive, it wasn’t just for kids. I’m gonna name my lead characters after the directors, actually, it was super inspiring. I think we have a chance to do something really neat. What? You have to go? But, uh… Oh, ok. Well…uhhh, I’ll see you…I’ll talk to you. Ok, bye.”

Re: Sonic, some thoughts: “Jeff, hi, so we were tossing some ideas back and forth on this Sonic thing. I’m sure you saw, but Twitter hates the trailer, so we gotta change the look. It’ll push the whole thing back a year because we don’t want them walking in remembering the old look, we gotta give em time to forget. I’m sure the animators won’t mind. How hard could it be to fix his eyes and his teeth? It’s not rocket science. Anyway, we did a test screening in Van Nuys and they hated most of it, so we’re bringing in some guys to do punch-up. Just like to make sure the parents don’t get bored. One of the guys, Bruce Vilanch or somebody, I don’t remember, he has a joke about Hillary’s emails that killed in the room. He had another thing about Shadow Wolves. I think it’s a Steven Seagal reference, I don’t know but someone’ll find it funny. Law of averages.

We’ll just do some quick reshoots, and have Ben Schwartz say some stuff while the hedgehog’s not looking at the screen, just liven it up a little. We also think we need more of a button on the cop stuff. James Marsden wants to be a big city cop, but we don’t have enough of a motivator. We should have him say that he wants to be more important, like that he’s gonna be saving lives. It’s just gonna play better in the middle of the country if we have the Blue Lives Matter thing running through it. Easier to root for him that way; can’t all just be the Andy Griffith/Barney Fife thing. We’re gonna also add some more of Jim’s adlibs as Dr. Robotnik. Every second he’s on screen people are laughing, so we’re gonna put some outtakes back in. Are you married to his name being Wachowski?”

In the Theatre: I’m doing math in my head as the last trailer for some movie about pro-wrestling monsters wraps up and the movie starts. Calculating rent against groceries. I’d gotten my direct deposit from the bar job, but I have some auto payments about to take a few hundred bucks out of my account, should I pocket the rent money now, or wait until next week? I have two interviews planning to run, which should be a few hundred extra bucks but I won’t get the checks until March. I remember my time in film school. Did I know it’d be this hard to live after graduating? Hard, yes, but I guess I expected the worry to stop at some point. Jeff Fowler went to an art school in Florida. He was a kid from a town literally called Normal, Illinois, who had an Academy Award nomination by the time he was 26.

Now? He’s apologizing for giving Sonic The Hedgehog human teeth on Twitter and forcing people with families to work overtime to fix a movie no one will remember having seen in a month. Millions of dollars, weeks of sleep lost, families neglected, pets unfed, all so that Sonic can have less realistic teeth. His attempts at Wachowski-esque compositions, color grading, madcap game logic, all of them fail. The movie succeeds only when it’s plugging The Olive Garden and its half dozen other corporate tie-ins. Like the Bloomberg campaign, Sonic The Hedgehog can pretend it’s in good fun to run amok with branded content, but it isn’t fooling anyone. This wasn’t a movie, it was a boardroom meeting with some poor hapless dreamer strapped to the “directed by” credit like a keelhauled sailor punished for his idealism.

The Verdict: I didn’t laugh, but I’m maybe not the target audience for the thing. Who the target audience is I couldn’t tell you with a gun to my head. The school group I was told would be watching this flop sweat-soaked trifle is mostly 12 year olds from the looks of them. They laugh as a group three times. I counted. One of them laughed at one sight gag by himself. That’s it. They quietly talked amongst themselves the rest of the time. What a school is doing taking kids to see a movie based on a video game when they all own cell phones? Couldn’t tell you, but I’m guessing they enjoyed not being in class even if they clearly didn’t enjoy the movie. Goddamndest thing, though, they all cheered like hell during the post-credits scene when Sonic’s sidekick Tails showed up. I couldn’t believe it. They snored their way through the first movie, and then cheered like zealots when they were threatened with another one. It may happen, too, even if the box office isn’t rousing. You’re still going to die.