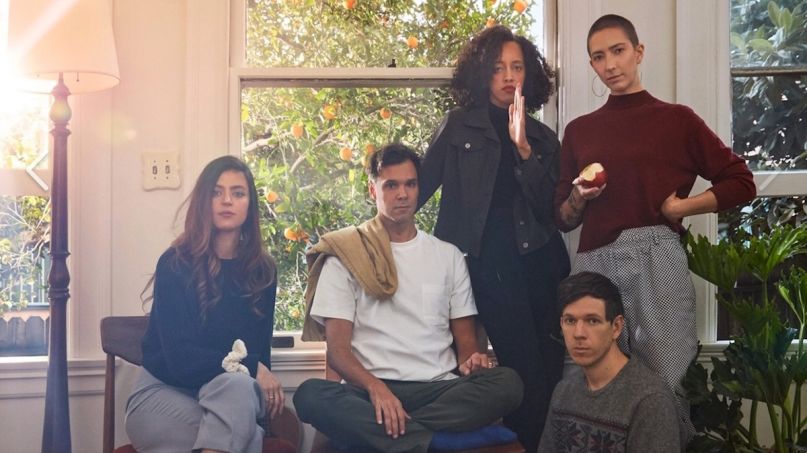 Dirty Projectors are back with a new song called “Overlord”. It’s the first recording to feature the band’s new lineup in a studio setting.

Technically, “Overlord” is a standalone single from Dirty Projectors, but it’s tempting to hope it will be the first track from an upcoming record. Ever since frontman David Longstreth got a new lineup together to tour 2018’s album Lamp Lit Prose, they’ve been finding their reinvigorated stride. Fingers crossed they don’t stop now.

“Overlord” sees Maia Friedman, the band’s guitarist, take the spotlight as the lead singer. She turns a short number about surveillance into a beautiful, moving, simple pleasure that’s hard to resist. As the track progresses, she’s surrounded by vocal harmonies courtesy of her fellow bandmates. It’s essentially the “Two Doves” of the band’s new era.

In the song’s music video, directed by David Longstreth, New York City comes to life through self-aware shots. Longstreth can be seen playing the acoustic guitar atop a plastic bucket in the street. Friedman can be seen singing on different famous architectural buildings. In a reflection, the rest of Dirty Projectors’ singers can be seen standing side by side harmonizing. All of the shots frame the person up close, giving a sense that, no matter where they are, they’re being watched. Check it out below.

So far, there’s only a few tour dates on Dirty Projectors’ calendar, but it’s better than nothing. Find tickets to all of their upcoming concerts here.