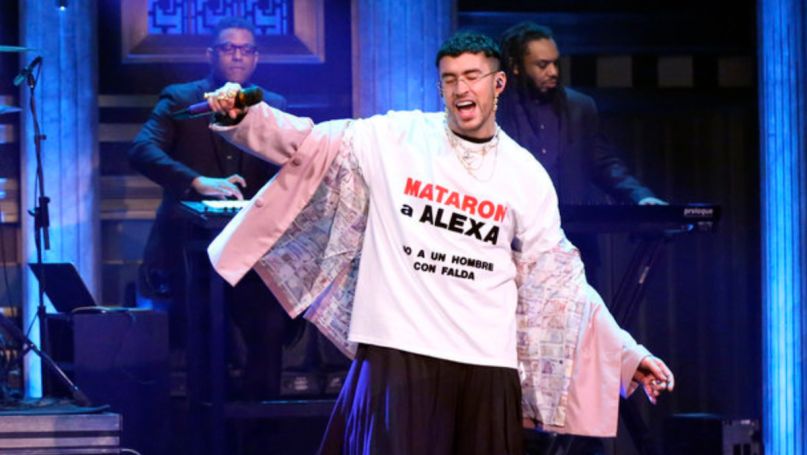 Bad Bunny gave Latin music fans quite a treat during his appearance on Fallon Thursday night. Not only did he team with Sech for a performance of their collaborative single “Ignorantes”, but he announced a brand new 20-track album that’s set to drop tomorrow.

Update: You can stream the album in full now.

Due out Saturday, February 29th, the LP is called Yo Hago Lo Que Me Da La Gana, which Bad Bunny said translates to “I Do Whatever I Want”. He also revealed the album’s cover art, which you can see via a screenshot ahead. The effort serves as his sophomore solo effort following 2018’s X 100pre, and also comes after his 2019 surprise collaboration with J Balvin, Oasis.

As for the “Ignorantes” performance, Bad Bunny and Sech were backed by members of The Roots. Bad Bunny’s outfit featured a skirt and shirt that, when translated from Spanish, read, “They killed Alexa, not a man in a skirt.” The statement references the recent murder of Alexa Negrón Luciano, a homeless transgender woman who was shot dead in Puerto Rico. A somewhat popular social media figure often mocked as a “bag lady,” photos of Luciano being questioned by police went viral after a woman accused her of spying on her in a McDonalds women’s bathroom. Luciano was killed not 12 hours later, and her murder was reportedly also shared via social media. The incident has sparked outrage over Puerto Rico’s dangerous levels of homophobia.

As one of the biggest modern Puerto Rican stars, Bad Bunny’s statement was a powerful one. Watch the performance along with the YHLQMDLG announcement interview below. Bad Bunny also has a number of festival appearances on the horizon — including Bilbao BBK Live, NOS Primavera Sound, and Primavera Sound — as well as a pair of shows in his native commonwealth. Get tickets to all his upcoming concerts here.