At one point, Heard says, "I can't promise I won't get physical again. God I fucking get so mad sometimes I lose it" 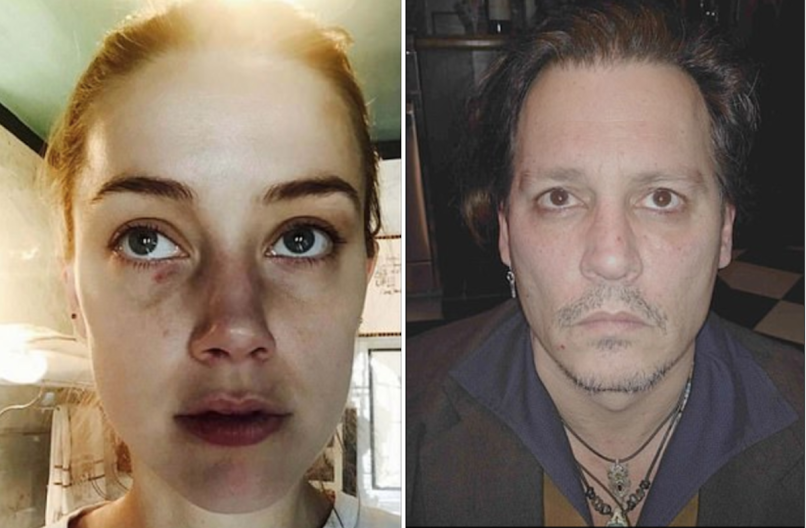 Photos of alleged abuse: Amber Heard, left, from her divorce filings, and Johnny Depp, right, from his defamation lawsuit

In a newly leaked audio recording, Amber Heard admits to “hitting” her ex-husband Johnny Depp, as well as pelting him with pots, pans, and vases. The couple wed in 2015 and divorced in 2017, and while there was a settlement in the separation, the acrimonious legal battle has continued.

The Daily Mail obtained the recording, which was reportedly made on Heard’s phone with her consent during an informal couples therapy session. This raises the question of how the audio files traveled from Heard’s phone to The Daily Mail dropbox. The answer — “a well placed source” — does little to dispel concerns that Heard’s property or privacy may have been violated.

The context of the recording matters, because while Depp sounds reasonable and Heard unhinged, the full audio has been edited down to two- and three-minute clips. One snippet begins with Depp responding to something Heard has said, but we never hear her initial point. It’s possible that a wider context would reveal a different story.

Having said that, the recordings cover several acts of violence perpetrated by Heard, while seeming to suggest that Depp never initiated the violence and only rarely reciprocated. In one exchange, she says, “I can’t promise I won’t get physical again. God I fucking get so mad sometimes I lose it.” In another, she admits to hitting Depp and mocks him for saying it was a “punch:”

“I’m sorry that I didn’t, uh, uh, hit you across the face in a proper slap, but I was hitting you, it was not punching you. Babe, you’re not punched. I don’t know what the motion of my actual hand was, but you’re fine, I did not hurt you, I did not punch you, I was hitting you.”

Throughout, Heard complains that Depp walks away during their fights, even taunting him with, “You are such a baby. Grow the fuck up, Johnny.”

Depp defends his strategy of walking away to deescalate. “I left last night, honestly, I swear to you, because I just couldn’t take the idea of more physicality, more physical abuse on each other. Because had we continued it, it would have gotten fucking bad. And baby, I told you this once, I’m scared to death we are a fucking crime scene right now.”

Heard complains that Depp is slow to reconcile after fights. “Just because I’ve thrown pots and pans does not mean you cannot come and knock on my door.”

“Just because there are vases does not mean that you come and knock on the door,” she reiterates.

“Really, I should just let you throw?” Depp questions, adding once the spat has escalated, “The only time I ever threw anything at you was when you fucking threw the cans at me in Australia!”

“Why are you trying to justify who throws things based on whether or not you come knocking on the door? I don’t get why one informs the other,” questions Heard.

Depp yells, “Because that is a fucking irrational and violent fucking maneuver! So a man would want to get out of that area so that he doesn’t get so fucking angry that he actually does pop the fucking wife.”

Listen to the edited audio clips below.

Since the recording’s release, a spokesperson for Amber Heard accused Johnny Depp of “vindictively” leaking the tape. In a statement, the spokesperson said,

“Anyone familiar with the dynamics of domestic abuse would immediately recognize what is really going on here. Throughout the extended tape recording that Johnny Depp vindictively turned over to the press, Ms. Heard repeatedly attempts to placate Mr. Depp, ignore his accusations, and force him to acknowledge what was really happening in their relationship.”

This isn’t the first leaked clip from Heard and Depp’s toxic marriage. In 2016, Heard secretly recorded an enraged Depp stomping around the kitchen and slamming cabinet doors. When he noticed her phone, he tried to slap it off the table.

Following that recording, Heard filed a restraining order against Depp, only to retract it after their $7 million divorce settlement. In 2018, Heard published an op-ed in the Washington Post accusing a former partenr of physical abuse — though not mentioning Depp by name — while making no mention of any violence on her part. The next year, Depp served Heard with a $50 million defamation lawsuit, claiming that her false accusations had cost him the role of Jack Sparrow in Pirates of the Caribbean, among other lucrative film roles.

He may never twirl his fingers as Jack Sparrow again, but the events have hardly ended his career. Johnny Depp is playing Grindelwald in J.K. Rowling’s latest franchise Fantastic Beasts and Where to Find Them, a decision Rowling defended while implying that fans didn’t have the full story.

Last year, Amber Heard had roles in Aquaman and Her Smell, and she was recently cast in the upcoming Stephen King series The Stand.