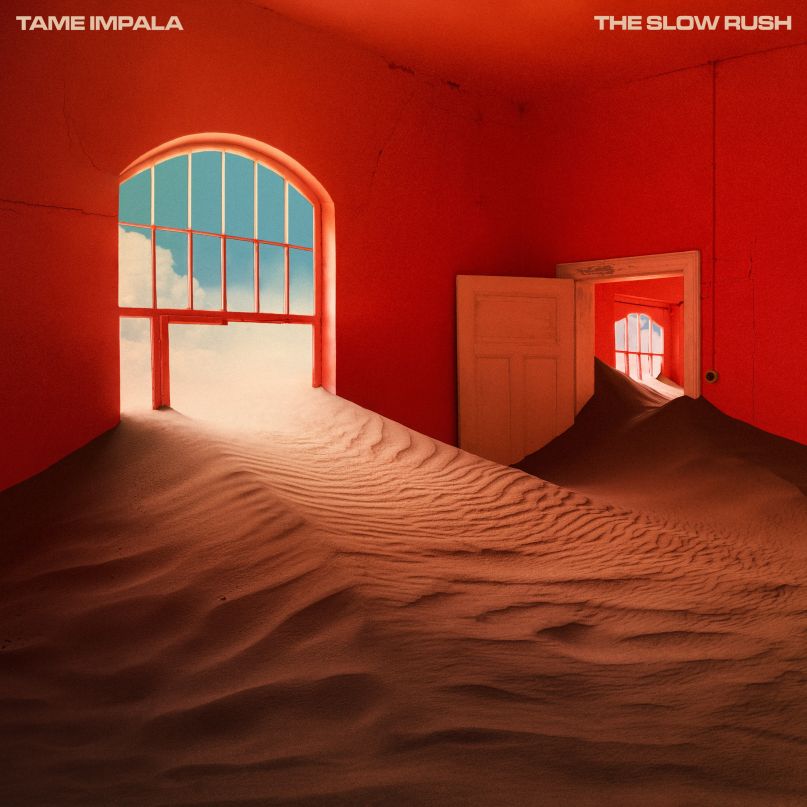 The Lowdown: Tame Impala’s Kevin Parker loves hip-hop. You wouldn’t necessarily know it from the neo-psychedelic, Lennon- and Zeppelin-referencing rock of his first two albums, InnerSpeaker and Lonerism. Nor is the influence glaring on 2015’s Currents, an international sensation whose groove-heavy hits “Let It Happen” and “The Less I Know the Better” were heard everywhere from rock radio to the club. However, Parker’s love for hip-hop, sampling in particular, informs the very building blocks of his music, as he told The New York Times: “You can have all this music that’s of all different types coming together, and if you can say something over the top of that that’s meaningful, and is coming from the same person as the rest of it, it will join it together. And people will never even realize that it’s different eras of music coming together.”

This philosophy oozes out of Parker’s new, long-awaited project, The Slow Rush. While Parker isn’t physically sampling his sounds from old vinyls collecting dust in obscurity, The Slow Rush is obviously the work of a crate digger. It’s the work of a dedicated miner, searching for any imperfect gem in music’s vast ore he can refine into brilliant regalia.

The Good: As Lonerism expanded on the rock sound of InnerSpeaker, so The Slow Rush expands on the laid-back psychedelia of Currents. For most of the album, Parker travels at a drifting pace, allowing warm analog synthesizers and yacht rock voicings to waft him toward his destination. Keyboard rhythms propel songs like “Borderline” with its slow disco groove or “One More Hour” with its pristine ELO-referencing space-pop or, again, “It Might Be Time” with its jaunty Hall & Oates-like bounce. Parker seamlessly combines these influences with source materials as varied as Quincy Jones’ “Ironside” siren and ‘90s English techno, bringing together a beautiful collage unique to Parker’s brain.

The gentle care with which Parker attends his music lulls the listener into his black hole, where time and reality are warped beyond definition. It’s here that Parker explores his past, considers his future, and engages his present at once as though nothing separates the three. “We’re on a roller coaster stuck on its loop-de-loop/ ‘Cause what we did, one day, on a whim/ Has slowly become all we do,” Parker laments on opener “One More Year”. Parker’s consideration of time filled with repetitive monotony resonates whether you’re a touring musician or a nine-to-fiver. Indifference is a clever foe slowly siphoning joy out of even the most enjoyable task with each repetition.

Thus Parker takes the time to slow things down, to disrupt life’s loop-de-loop by looking at it differently, even when it’s painful. Parker’s father died during the recording of the first Tame Impala record, never hearing his son’s finished project or seeing his success. Parker has expressed devastation over his father’s death in the past, especially since his father always cautioned him about the unreliability of a music career.

On “Posthumous Forgiveness”, he revisits this relationship — how he trusted his father blindly as a kid, grew skeptical in adulthood, and harbored frustration as he tells his father, “You decided to take all your sorrys to the grave.” As the song bridges into a calmer, more contemplative second half, Parker leaves behind anger and instead mourns what could have been. “Wanna tell you ’bout the time/ Wanna tell you ’bout my life/ Wanna play you all my songs/ And hear your voice sing along,” he sings with falsettoed innocence. Tame Impala’s music isn’t always about the lyrics, but here, when Parker’s grief is laid completely bare, the words alone invite us to grieve alongside him as a dear friend.

The Slow Rush is as much about moving forward as it is lamenting the past. “Does it help to get lost in yesterday?” Parker asks in the chorus of “Lost in Yesterday”. He answers his own question with infectious, bass-driven grooves (the most memorable musical moment of the record), reminding us to keep dancing, unhindered by past pain. For someone so steeped in sonic nostalgia, Parker is self-aware enough to recognize reliving the past with rose-colored vision, while perhaps comfortable, isn’t always a boon to growth.

The Bad: Elsewhere, Parker’s lyrics can be found lacking. The “Believe me, I can” refrain of “Breathe Deeper” is a rare moment where repetition becomes an annoyance rather than a welcome cycle drawing us deeper into Tame Impala’s musical vortex. Again, on “Glimmer”, the song’s lone refrain — “I just want to let it all go” — leaves something to be desired. The song, which barely passes the two-minute mark, feels like a demo sketch when surrounded by such sprawling pieces as “Posthumous Forgiveness”. Mostly though, it’s just that Parker’s lyricism is unspectacular, overshadowed by the intense passion he has for musical arrangement, psychedelic texture, and reverb-soaked bliss. It’s a missed opportunity to turn The Slow Rush into something truly transcendent, rather than just a solid successor to Currents.

The Verdict: Five years removed from Currents, The Slow Rush plays as though no time has passed at all. And for Parker, maybe it hasn’t. Maybe the speeding bullet of touring life and new fame blurred those five years into hours. However, The Slow Rush gives Parker solace from the endless cycle, a chance to breathe and reflect on himself. With dreamy layers of hazy, synthy soft rock, he invites us to do the same, to stand on top of the table and see the world differently, to meditate on the construct of time. Parker never offers deep answers to life’s questions. He’s just figuring it out like the rest of us. In the chorus of “On Track”, Parker tells us, “Troubles keep falling in my lap, yeah/ But strictly speaking, I’m still on track.” The rush of the roller coaster rumbles on, but Parker reminds us to slow down, take those troubles one at a time, and stay on our winding track.

Essential Tracks: “Posthumous Forgiveness”, “On Track”, and “Lost in Yesterday”