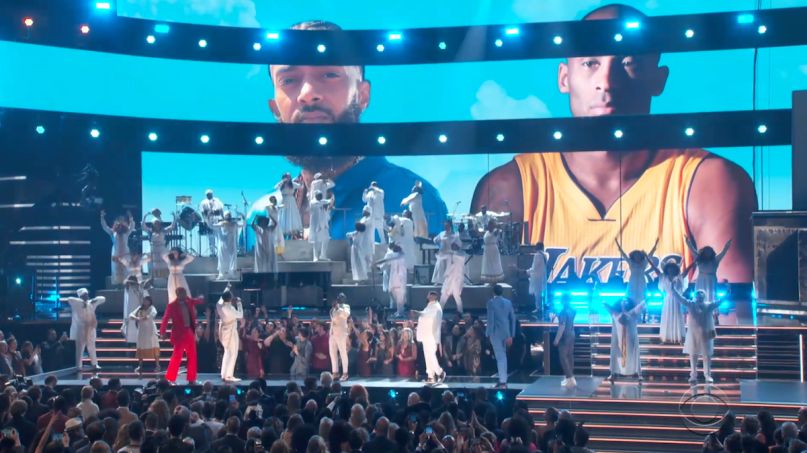 The life and legacy of late rapper Nipsey Hussle was celebrated with a special Grammys tribute on Sunday.

The moving performance saw musicians like John Legend, DJ Khaled, Meek Mill, Kirk Franklin, and Roddy Ricch deliver their personal dedications. Rapper YG, who was just released from jail after being arrested and charged for robbery, also was on hand.

However, the heart of the event came with a truly uplifting rendition of “Higher”, the 2019 collaboration between DJ Khaled, Legend, and Hussle, released prior to Hussle’s death. To close things out, a picture of Hussle and Kobe Bryant, both proud Los Angeles natives, was projected on a screen behind the stage.

“An activist, entrepreneur, and rapper, Nipsey Hussle had a lasting impact on not just his community, but also the culture at large,” Grammys executive producer Ken Ehrlich said in a press release. “There is no denying the influence he had and his legacy will be felt for generations to come. We are honored to bring together this amazing group of artists to celebrate Nipsey’s life and pay tribute to his many contributions to music. It’s sure to be a memorable performance.”

In related news, you can catch Legend live on tour by purchasing concert tickets here.

The 62nd Annual Grammy Awards has also seen performances from Billie Eilish, Ariana Grande, Blake Shelton and Gwen Stefani, Tyler, the Creator, Lizzo, Camila Cabello, and The Jonas Brothers. To stay up to date on all of the ceremony’s big moments, make sure to follow our complete Grammy Awards 2020 coverage.