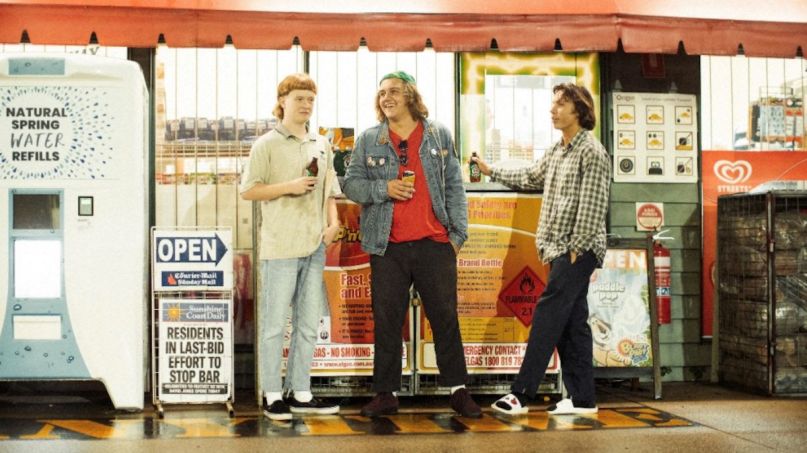 The Chats, photo by Luke Henery

Australian punk rock band The Chats have announced their debut album, High Risk Behaviour, as well as an extensive US tour. To celebrate the news, the trio have shared lead single, “The Clap”, and a corresponding music video.

High Risk Behaviour will arrive March 27th via Bargain Bin Records/Cooking Vinyl Australia. It’s the first proper full-length from The Chats since forming in 2016, and it makes its introduction quickly: the runtime is barely 28 minutes, despite having a 14-song tracklist. It’s this type of quick, catchy, garage-tinged punk rock that has made fans out of the likes of Dave Grohl, Josh Homme, and Iggy Pop.

Get a taste for their sound with “The Clap”, a tongue-in-cheek number about finding out you have an STD. In the song’s music video, directed by Matt Weston, a man stumbles into the hospital shirtless, scratching his crotch, and relays how he got gonorrhea. After being ushered into a hospital room, the doctor scolds him and then whisks the patient off to a surgery room where he’s poked, prodded, and nearly cut. Each band member stars in a cheeky role, as you can see below.

The Chats will go on tour in support of their new album immediately after its release. Kicking things off with a set at Coachella, the band then heads on a long trek across the US, stopping in Seattle, Austin, Chicago, Nashville, Philadelphia, New York City, and Boston along the way. Then later, in October, the group has plans to tour Europe.

Tickets to The Chats’ tour dates go on sale Friday, January 24th at 10:00 a.m. local time. Find more information about their shows at the band’s website, and grab tickets to all of their upcoming concerts here.