Slash on new Guns N’ Roses music: “We’re not really sure what we’re doing with it”

The guitarist adds, "Stuff is happening, but there are no specifics" 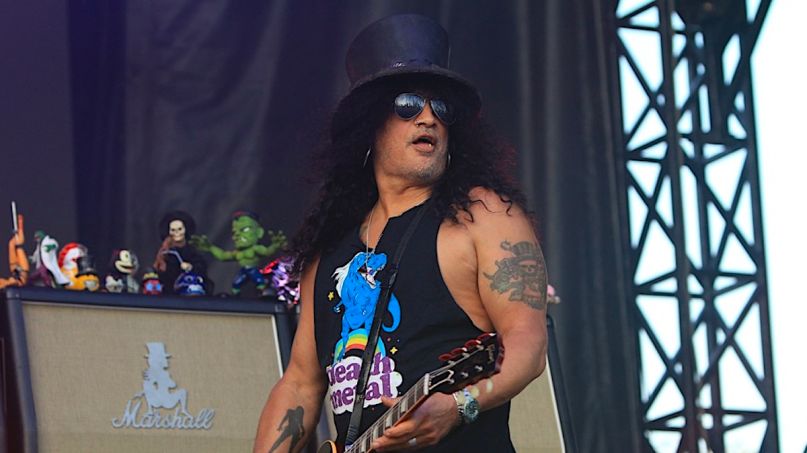 Last year, Slash seemed pretty confident that Guns N’ Roses would hit the studio to record a long-awaited new album. However, in a new interview, the guitarist admits that GN’R are “not really sure” how or when the band will release new music.

Slash appeared at the NAMM convention in Anaheim, California, this past weekend, and spoke with Guitar.com about his new collection of Gibson Guitars. At the end of the interview, the conversation turned toward new Guns N’ Roses music.

Asked to share the latest on the upcoming GN’R album, Slash responded, “There’s been no definitive answer on anything and I’ll just keep keep to that. Stuff is happening, but there are no specifics. More than anything, it’s because of the nature of the industry right now.”

He added, “It’s just like, ‘How do you want to do this?’ I mean there’s material and there’s recording and there’s shit going on, but we’re not really sure what we’re doing with it right now.”

When the interviewer mentioned changes in the music industry since the last time GN’R released an album, Slash commented, “Yeah! And there’s a handful people who said, ‘Yeah, make a record and go old school.’ And there’s a handful of people that are like, ‘We don’t even know what buying a record is any more!'”

Slash spoke with Heavy Consequence last year in April, and he suggested that GN’R would hit the studio once their fall 2019 tour had wrapped up. He told us, “There’s a handful of gigs that are happening at the very end of September and through October … and then it’s really just focusing on getting a new record done.”

However, since then, GN’R have added more tour dates. They’ll be playing a headlining set at the Bud Light Super Bowl Fest in Miami on January 31st. After that, they’ll embark on tours of Latin America and Europe.