Pearl Jam Find New Groove on “Dance of the Clairvoyants” 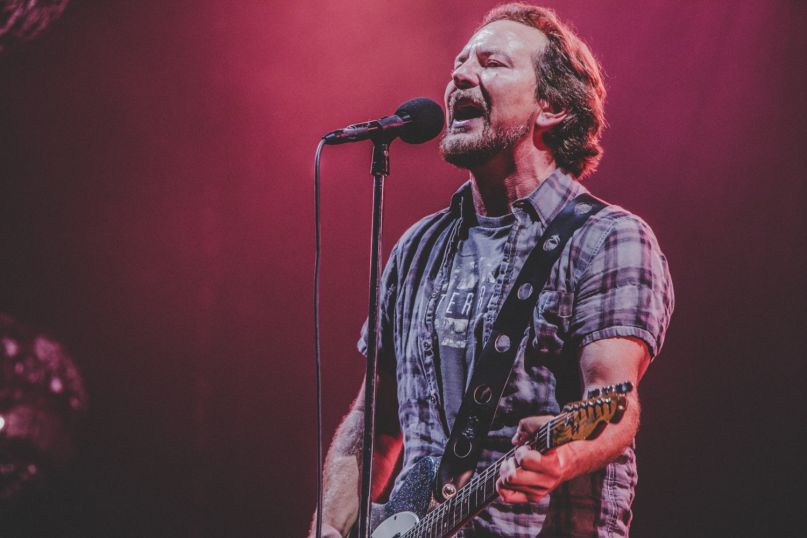 Pearl Jam have been back in the news for the first time in a long time these past few weeks. First, Seattle’s finest dropped the bombshell that they’d be releasing their 11th studio album, Gigaton, in late March. It will mark the band’s first full-length of new material since 2013’s less-than-electric Lightning Bolt. In the same breath, we heard word that the band would be supporting the new release with an extensive North American tour — far less a surprise but still reason to rejoice for the Pearl Jam faithful who now know to keep their evenings open this spring and summer.

However, this week brought the largest wave of all: Eddie Vedder and co.’s first new music in seven years (save for 2018’s “Can’t Deny Me”, which won’t appear on Gigaton). And it’s going to make some waves and rock some boats. If you were to eyeball the artwork for Gigaton (a picture of a Norwegian icecap gushing unnatural amounts of melt water), you might think the band were taking a turn towards more politically charged fare, and what better time than a moment when Greta Thunberg is actually a bigger name than Eddie Vedder? Seeing an official tracklist that has songs named “Superblood Wolfmoon” and “River Cross” also might make you think the group have Mother Earth in mind. And while all of this might prove true, nothing could quite prepare fans for what they heard when they spun “Dance of the Clairvoyants” for the first time.

It took seven years away for Pearl Jam to wade into a jarringly (at least for them) electronic sound — a move several other straight-ahead rock bands have dabbled in during that time. From drummer Matt Cameron’s opening beats — soon joined by the repeating parts of his bandmates — fans will realize they’re not in Seattle anymore. Well, at least not the part they typically associate with Pearl Jam. Bassist Jeff Ament calls the single “a perfect storm of experimentation and real collaboration” and even confides that the band switched up instruments and that guitarist Stone Gossard is actually playing bass on the track.

That unmistakable and inescapable electronic sound will no doubt turn off some diehards, and I’m not sure that if the rest of Gigaton follows suit, we’ll be looking at the first truly great Pearl Jam album of the 21st century. But to hear how the band actively tried to break old habits while building these songs, coupled with Eddie Vedder sounding more invested than he has in ages (complete with cadences that almost sound like a gravelly, angry David Byrne), there might be something to this new wave. As Vedder negotiates words of hope with undeniable conviction (“It’s not a negative thought/ I’m positive, positive, positive), it’s not hard to imagine Pearl Jam fans of all stripes dancing to the message under a superblood wolfmoon in the months to come.

For Fans Of: Other rock bands — Spoon, The Strokes, etc. — who have dabbled with the dance floor and come out on top or at least didn’t trample many toes.

Best Moment: Hearing Eddie Vedder’s throaty delivery and growl dance around Matt Cameron’s beat. It’s always fun to hear old friends find new ways to harmonize. Even if the new album isn’t everything fans hope it will be, it’s hard to imagine the band’s collaborative change-ups not helping to keep their live show as energized as ever.

Where to Go from Here: To the box office because we’re not about to miss Pearl Jam coming through our town. Still, we’re curious how this single fits into Gigaton as a whole. Is it a microcosm or an anomaly?

Don’t Miss These Other Great Songs This Week: It’s a good week for weird rap. Hoodlum’s “Scam” sets the bar high for other beats in 2020 to follow, a backwards walk of haunted, fluttering ghosts. Even more out there is Bby Goyard’s “Eurohouse Séance” in which the rapper makes apocalyptic happy hardcore that sounds like he’s rapping the eulogy at an arcade game’s funeral. Fat Tony and Taydex’s “Magnifique” sounds like retro-futurism from a parallel universe. –Dan Weiss