Watch a video for the new song featuring D.H. Peligro of Dead Kennedys and Boogie 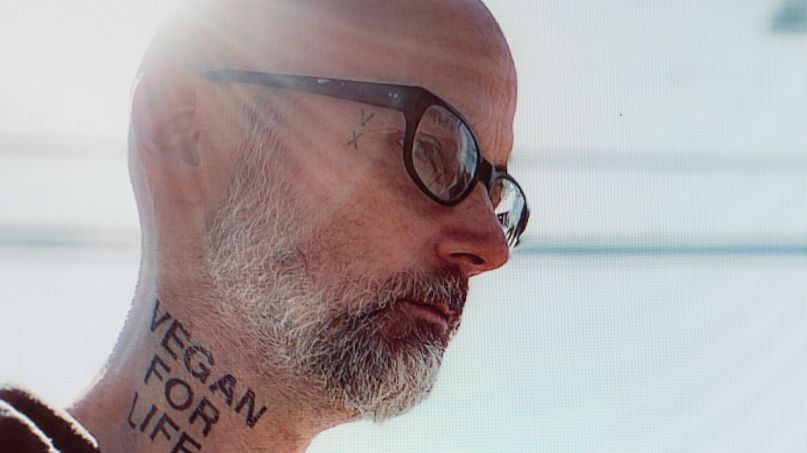 Moby said he was “going away for awhile” last summer following some controversial rewriting of his history with Natalie Portman. Seven months later, the avowed vegan for life and animal rights activist is ready to return with a new album, All Visible Objects. Due out March 6th, the effort is being previewed today with the single “Power Is Taken”, featuring Dead Kennedys’ D.H. Peligro and Boogie.

All proceeds from the follow-up to 2018’s Everything Was Beautiful and Nothing Hurt will be donated to a number of ecologically- and socially-minded organizations. Moby revealed the list of charities in a press statement, sly tucking the All Visible Things tracklist inside the summaries for each foundation. The charities include Brighter Green, Mercy for Animals, Rainforest Action Network, Extinction Rebellion, The American Civil Liberties Union, Animal Equality, The Physicians Committee, The Human League, the International Anti-Poaching Foundation, The Good Food Institute, and The Indivisible Project.

The 11-track record features a number of contributing vocalists, with singer Apollo Jane guesting on four songs, including a duet with Moby called “One Last Time”. Jamaican dub artist Linton Kwesi Johnson appears on “Refuge”, while Moby’s frequent collaborator Mindy Jones sings on a cover of Roxy Music’s “My Only Love”

(Read: The Five Most Revealing Moments in Moby’s Memoir Then It Fell Apart)

As a first listen, “Power Is Taken” hints at an aggressive electronic sound that amplifies Moby’s statements of activism. “We who hate oppression/ Must fight against the oppressors,” intones Peligro on the track. “Power is not shared/ Power is taken.”

Take a listen via the single’s video, a visual collage of black-and-white animation overtaking images of real-world brutality, below. Then check out the cover art and tracklist for Moby’s All Visible Objects.