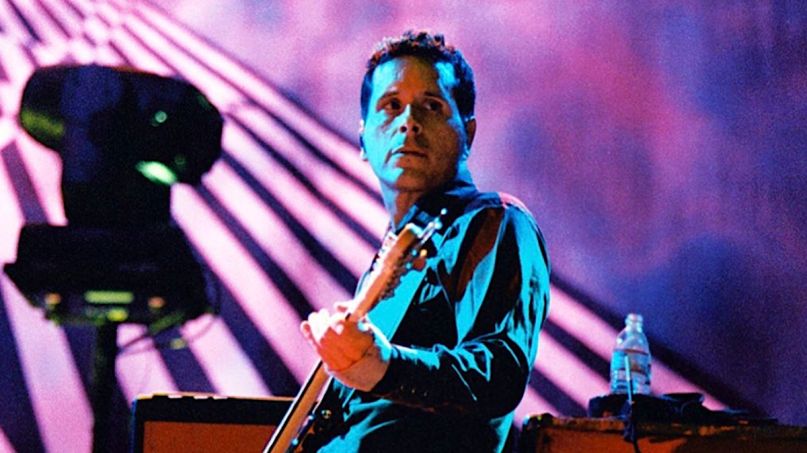 Juan Alderete, longtime bassist for The Mars Volta and current bassist for Marilyn Manson, is in a coma after a serious bicycle accident. According to his wife, Anne, the 56-year-old musician suffered a traumatic brain injury.

The accomplished bassist first gained attention as a member of Racer X, an ’80s metal band that featured guitarist Paul Gilbert (Mr. Big) and drummer Scott Travis (Judas Priest). The band reunited in 1997 and remained active until 2009. Overall, they released a total of five studio albums.

He joined The Mars Volta in 2003, and remained in the band until their breakup in 2012.  He appeared on five Mars Volta albums during that time, and has also played on a number of solo releases from Mars Volta guitarist Omar Rodríguez-López.

Alderete is also the current bassist for Marilyn Manson, having replaced Twiggy Ramirez in fall 2017.

In an Instagram post on Friday evening (January 24th), Alderete’s wife Anne explained that Juan injured himself in a solo bicycle accident on January 13th, sustaining “serious head trauma in the form of a Traumatic Brain Injury (TBI).” Her full post reads as follows:

“Hi everyone – this is Anne, Juan’s wife. While I generally hesitate to share personal details on social media, it felt right to include all of you who’ve supported Juan over the years as friends, fans, fellow music (and food, cat, bike, Japan) lovers and musicians.

Juan was in a solo (no cars, other people) and very serious bicycle accident on 1/13/20 not far from our home. He – as always – was wearing a helmet and protective clothing but sustained serious head trauma in the form of a Traumatic Brain Injury (TBI); his form of TBI is Diffuse Axonal Injury (DAI) and as of today, he remains in a coma.

The only prognosis is to wait and see, as the brain is a complicated organ and the outcomes for DAI patients has a range as wide as the sea. While frustrating, it also allows for a world of positive outcomes so we can only hope for the best.

We know you have questions, concerns, thoughts to share, so please feel free to leave them in the comments (not DM please, sorry) here. We’re also very eager to hear from neurologists, medical professionals with experience in DAI and TBI, first-person accounts of similar trauma and outcomes – essentially any useful, factual and accurate resources that relate to Juan’s injury. If you have any of these, please DM me (Anne) @tunatoast.

We will post updates here from time to time. Thank you all and please keep Juan in your thoughts. – xo, Anne”

In his most recent Instagram post prior to the accident, Juan wished Zack de la Rocha a happy birthday, sharing a photo of himself having dinner with the Rage Against the Machine singer and Mars Volta / Queens of the Stone Age drummer Jon Theodore. However, it is unclear when the photo was taken.

We’d like to send our best wishes to Juan Alderete and his family during this difficult time, with hopes that he recovers from this serious injury.