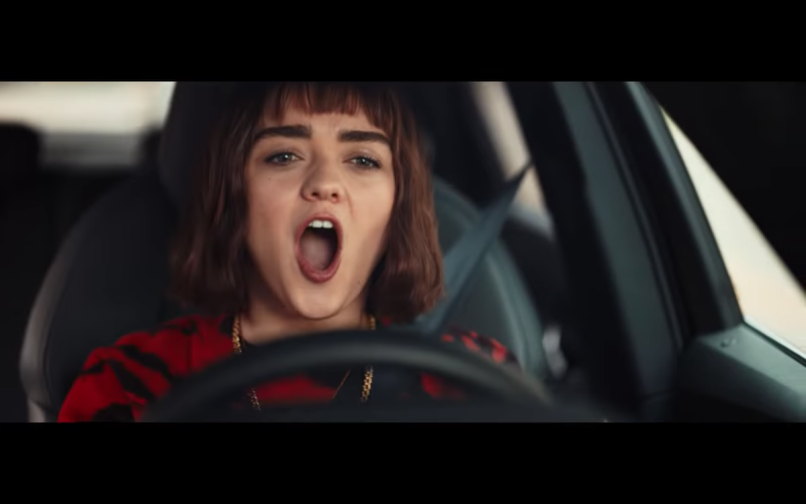 Game of Thrones’ Maisie Williams not only can wield a sword, she can also sing. In an upcoming Audi commercial for this weekend’s Super Bowl LIV, the actress shows off her pipes by belting out a rendition of the Frozen classic “Let It Go”.

The one-minute ad finds Arya Stark herself cruising around on a hot day in the German luxury automobile manufacturer’s new e-tron Sportback electronic car. As she approaches a traffic jam brimming with snarling road-rage-filled drivers, Williams kicks her whip into gear and starts belting out the Frozen anthem. As she blazes around traffic, her melody begins to spread to all she passes.

The song holds layers of messages, not just about dropping the crazed traffic attitude, but a perspective adjustment as well. According a press release from Audi (via Billboard), Audi’s use of the song is intended to signal “letting go of the past and embracing a more sustainable future.”

In her own post on Instagram, Williams echoed the thought, writing, “I had such an amazing time filming this for @Audi — whizzing around LA in the all-electric Audi e-tron Sportback. The future is electric, let the past go!”

The commercial is one of many anticipated for this weekend, including the Mountain Dew Shining parody starring Bryan Cranston and Sam Elliott’s rendition of Lil Nas X’s Grammy-winning “Old Town Road”. Then of course, there’s the halftime show, co-headlined by Jennifer Lopez and Shakira.

As for Williams, she’s moving into her post-GOT stride, starring in the upcoming X-Men horror film The New Mutants.

LET IT GO 🙆🏻‍♀ I had such an amazing time filming this for @Audi – whizzing around LA in the all-electric Audi e-tron Sportback. The future is electric, let the past go! #ad #Audi #etron #LetItGo #beepbeep #broombroom