10 Times Larry David Was Right on Curb Your Enthusiasm

Whether he's busy with beans or bringing over baguettes, LD hasn't always been a schmuck 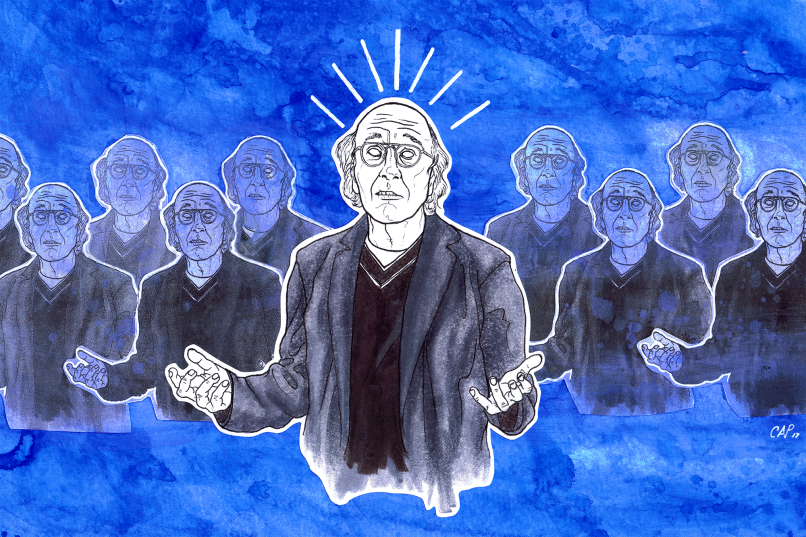 But so are the rest of us.

The difference is that we hide all of our annoyances and flashes of pettiness behind waxen smiles and inane pleasantries so as not to make a faux pas, sour a daily presence, or end up the topic of your enemy’s next cocktail hour. Because, ya know, it sucks to have people upset with you. Even an annoyed cashier can stick with you, causing you to reevaluate every step of the interaction. And since we’re all the heroes in our own narratives, we’re prone to bending over backwards in justifying whatever bad behavior we just exhibited. But, as in the world of Curb Your Enthusiasm, context never matters in the moment, and first impressions are forever impressions.

Everyone consumes Curb differently. Some are repulsed by Larry, only to be pleasantly shocked when they find themselves agreeing with his disinterest in the Tin Man or relating to his paranoia regarding a friend who hits the bathroom every time a restaurant bill hits the table. Others relate to him more often than that, which should no doubt make them feel less alone in a world that demands relentless social grace.

These are a collection of moments in which we think Larry’s bad attitude, refusal to conform, or probing “okay” were justified, ones that leave us as apoplectic as Larry in their complete disassociation from relatable human behavior. Because, seriously, would you give Halloween candy to a couple of teenagers who didn’t dress up? Of course you would. Begrudgingly.

(List: The 10 Most Cringeworthy Moments of Curb Your Enthusiasm)

Larry speaks for all of us anxious weirdos by doing and saying all the things we’re afraid to. And that’s why we love him.

What Did Larry Do? Arrived to the doctor right on time for his appointment, only to have the woman who arrived before him—whose appointment was after his—get in to see the doctor first. This is apparently the policy at the office, and Larry won’t rest until that policy is changed. His complaining naturally makes him an enemy of pretty much everyone in the office, including his doctor, with whom he already wasn’t on good terms.

Why Larry Is Right: Because appointments should matter! And this is just one absurd policy in an episode filled with them. Larry’s lawyer reads one of his scripts “as a professional courtesy” and charges him $1,500. Cheryl’s interior director overhears Diane Keaton leave her garbled number on Larry’s answering machine, then refuses to give him the missing digit due to client privilege. In nearly every episode, Larry brings his unwinding onto himself. “Interior Director” is one of the few episodes where Larry is truly the only one thinking logically here.

Why Larry Is Still a Jerk: Because that logic only goes so far. When Larry is again delayed at the doctor despite arriving first, he’s furious to discover that the policy has changed. “Apparently it’s not about the policy at all,” a nurse says. “It’s about you going first.” For his part, at least Larry agrees. “Me first! That’s the policy!”

What Did Larry Do? Terminated his relationship with his therapist for no reason other than that he saw him at the beach wearing a kaleidoscopic thong. “I can’t talk to him in that bathing suit,” he tells Cheryl after seeing him. “Well, kiss that therapist goodbye.”

Why Larry Is Right: Because one’s relationship with their therapist is a fragile thing. I speak from experience when I say that just riding in the elevator with your therapist is awkward enough. In the mind of the patient, therapists must exist within a bubble where they have no life, emotions, or proclivities of their own; their sole purpose is to help you. To see one out in the wild, a thong creeping up their plump ass, is a sight that’s simply too searing to tuck away while you’re trying to tell them about how your dad fucked you up. Also, the guy totally snubbed Larry in the bathroom. What was that about?

Why Larry Is Still a Jerk: Because he tells Richard Lewis, who never needed to know about the thong in the first place. As Lewis puts it, he’s been with the guy for ages and the prospect of having to do “the catch-up” with another therapist is a dire one, but simply hearing about the thong is enough to make him bail. “You should thank me for saving you from this hedonist!” Larry says.

What Did Larry Do? Larry’s the toast of ABC after getting a new series with Julia Louis-Dreyfus greenlighted, but at a screening of the network’s new miniseries he’s ordered by a woman to not bring his bottle of water inside. When he discovers she doesn’t work there, he asks why any of this is her concern. A bitter fight ensues, with both parties holding a grudge.

Why Larry Is Right: Look, there’s a time for snitching. There’s a time for taking a role of authority in a realm that is no way yours. This is not one of those times. Larry sums it up himself: “Don’t bring any pens or pencils in!” he cries in that tenor of disdain for which we know Larry so well. “Excuse me, Mrs. Cantor, we have homework! You forgot to give us homework!” Look, if it were a six-pack of beer, then yeah, say something, but narcing on someone for a bottle of water points to nothing more than a power complex. Also, who stands so stoically at a set of theater doors like that?

Why Larry Is Still a Jerk: Because, as the woman astutely points out, his assertion that the Golden Rule applies her really doesn’t make any sense. Sure, she was absolutely being a “hallway monitor” here, but there’s also no way to really come at a person who asserts an unearned authority as a means of enforcing what is actually a real rule. Is it obnoxious? Absolutely. But it’s not as if she was wrong. Some battles, Larry, you just have to let go.

What Did Larry Do? After he and Cheryl get the cold shoulder from acquaintances Ed and Melanie Loeb, they realize they never bought the couple a wedding present. They pick up a $300 bottle of wine for them, then swing by to drop it off. Appalled, Ed and Melanie refuse to accept the gift, claiming that “it’s an afterthought and it’s late.” If you’re unfamiliar with wedding etiquette, gifts apparently can’t be accepted after a year.

Why Larry Is Right: Because you’ve gotta be the most obnoxious humans on the planet to be offended by a breach of “wedding etiquette.” Also, Larry and Cheryl flew to Chicago for their “little bash” (“Little?” Melanie replies, “There were 266 people there!”) and already bought them a $200 vase and a nightgown. “You’re into us for about $5,500 as I see it!” Larry, red-faced and apoplectic, screams.

Why Larry Is Still a Jerk: Because next season he ends up having a problem with Ben Stiller throwing a birthday party two weeks after his actual birthday, a gripe that’s as absurd as any bit of dumb wedding etiquette. Really, Larry is as mad as I’ve ever seen him here, screaming at Melanie that the only reason he went to their wedding was because Cheryl “put a gun to my head!” Moments later he’s threatening to pour the entire bottle on their stoop. Larry, my friend, these people are not worthy of your rage.

What Did Larry Do? Badgered Cheryl’s pre-teen cousin, Stewart, into telling him how he did a magic trick despite Stewart’s assertion that a magician never reveals his tricks. “You do one trick and that makes you a magician?” Larry asks, to which Stewart replies that Larry is not “naturally” a magician and, thus, not worthy of knowing the secrets. Pissed off, Larry tells this child he’s not a magician, either.

Why Larry Is Still a Jerk: Because, for some reason, Larry’’s rage leads him to demand that Stewart give him half of his Halloween candy, which is such a hilariously cruel thing to say to a kid, especially one in such a baller Superman costume.