Funko Pop figures of Slipknot, Slayer, Motörhead, and Ghost on the way

The new collectibles were just revealed at the London Toy Fair 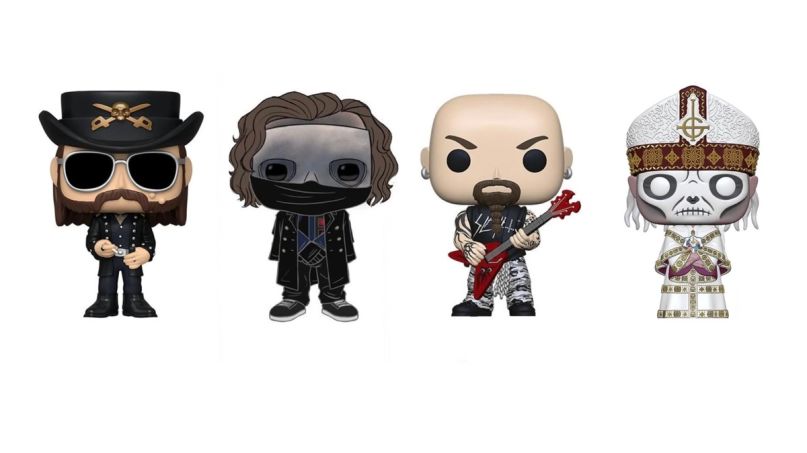 Metal fans should be pleased with the plethora of new Funko Pop! figures that were just unveiled during the 2020 London Toy Fair. Among the new collectibles are figures of Slipknot, Slayer, Motörhead, and Ghost.

Funko is one of the more popular toy brands around, with its Pop! line of vinyl figures offering cute likenesses of movie characters, superheroes, musicians, and more.

Slipknot are represented by figures of Corey Taylor, Craig Jones, and Sid Wilson. Perhaps other longtime members Shawn “Clown” Crahan, Mick Thomson, and Jim Root will make the next wave of figures.

For Slayer, fans can purchase figures of Tom Araya, Kerry King, and the late Jeff Hanneman. Founding drummer Dave Lombardo did not make the cut, nor did his replacement Paul Bostaph or recent guitarist Gary Holt.

Motörhead fans have a choice of two figures. One, of course, is the late great Lemmy Kilmister, and the other is the band’s Snaggletooth / War-Pig mascot.

Ghost have had previous Funko Pop! figures, but the latest one is a Hot Topic exclusive depicting Papa Nihil.

The Slayer and Motörhead figures will be available in April, while the Slipknot figures will arrive in August. All can be preordered at Entertainment Earth and other online toy sites.

Other new figures revealed during the London Toy Fair include Lil Wayne, ZZ Top, Shania Twain, Eazy-E, Willie Nelson, Weezer’s Rivers Cuomo, and more. See the metal figures below, and the others at Funko’s Instagram page.