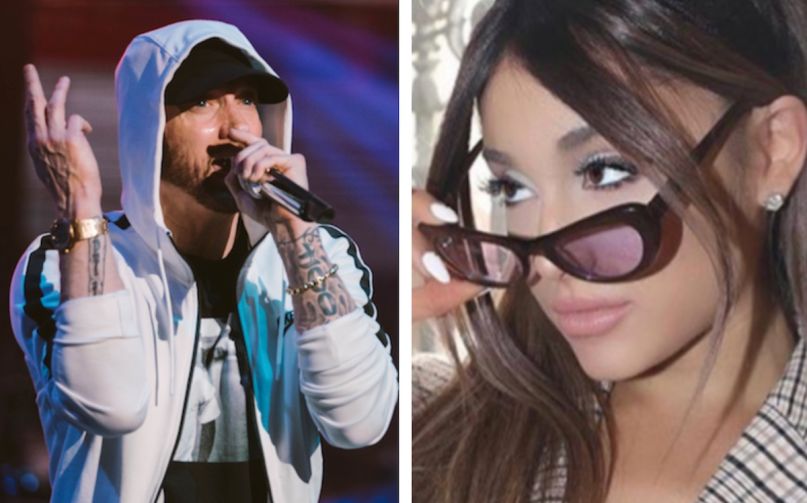 No topic is off limits for Eminem, even mass murders. The Detroit rapper surprise-released a new album on Friday, and one of its tracks sees him make light of the Ariana Grande concert bombing in 2017. Additionally, a new music video from the record features a re-enactment of the Las Vegas shooting that happened later that year.

The controversial Grande lyric appears on Music to Be Murdered By song “Unaccommodating”. On the Young M.A.-featuring track, Em callously rattles off, “But I’m contemplating yelling ‘Bombs away’ on the game/ Like I’m outside of an Ariana Grande concert waiting.” The Manchester Arena Attack claimed the lives of 23 people and left 139 wounded, most of which were young Grande fans.

As for his video for “Darkness”, Slim Shady replicates the horrific massacre at the Route 91 Harvest Music Festival in Vegas. Specifically, Em rhymes from the perspective of shooter Stephen Paddock, who killed 60 and wounded more than 800. The clip ends with a plea for better gun control, which is well and good, but the MC’s approach seems beyond tasteless.

These questionable releases shouldn’t come as a total shocker, though, given Eminem’s past track record. The self-described “Rap God” has put out a number of songs that insensitively skewed racist and misogynistic.

Update: The Mayor of Manchester, Andy Burnham, has responded to Eminem’s “Unaccommodating” lyrics. “This is unnecessarily hurtful and deeply disrespectful to the families and all those affected,” he told the BBC.

Meanwhile, Elkan Abrahamson, who speaks on behalf of several victims’ families said (via The Guardian), “Eminem is a traitor to his talent; this is disrespectful, unwarranted and needlessly cruel.” Over on Twitter, Figen Murray, whose son Martyn Hett died in the arena attack, also slammed Eminem’s choice of words: “Feels like he is piggybacking on the fame of Ariana Grande and Justin Bieber and says distasteful things about other celebrities…Not clever. Totally pointless.”

Check out both releases below if you dare.