Artist of the Month 070 Shake on Poetry, Overcoming Doubt, and Her Love of Quentin Tarantino 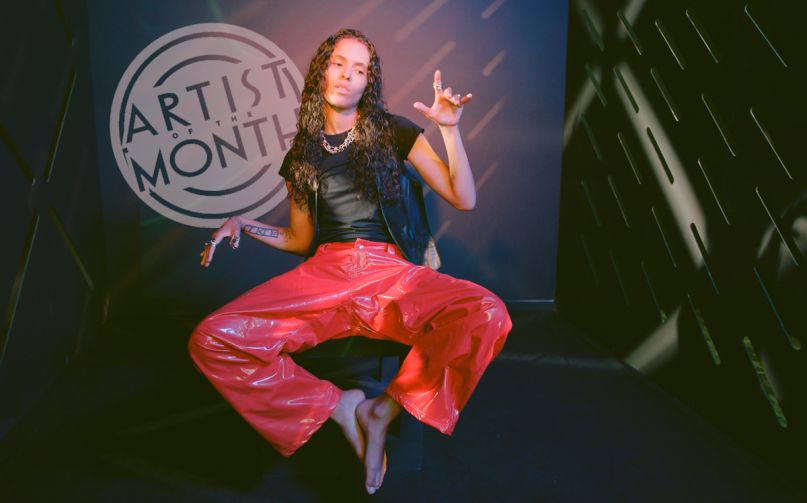 070 Shake Artist of the Month, photo by Dan Regan

Artist of the Month is an accolade we award once per month to an up-and-coming artist who we believe is about to break out. In January, we watch as 070 Shake takes the leap from feature to main attraction.

It’s early January, for most a relatively mundane winter Saturday. But for the 22-year-old Jersey native, today marks just six days until her debut album, Modus Vivendi, is released.

“It’s just that natural feeling, like you’re about to go play a championship basketball game,” she says over the phone, her tone breathless as the wind howls in the background. 070 Shake, born Danielle Balbuena, is on the move, bouncing between obligations as she gears up for a moment that has been building for over a year and a half.

It started in Wyoming (a state whose cultural relevance has pretty much peaked in the last two years), where she was pulled in to contribute to Kanye West’s ye. At the time, Shake only had a few scattered singles and a fairly subdued presence to her name.

But her voice is stacked with layers of emotion, filled with grit and rawness and pain. It’s gripping, visceral, and inescapable. It captivates you entirely, which is how she went from relative obscurity to being featured on two tracks on Kanye’s album and the best song on Pusha T’s last outing.

It’s also why after the ye madness all but dissipated, appreciation for 070 Shake didn’t. Her innate talent alone was powerful enough to buoy her career, to solidify the excitement for her first full-length project, or, as she describes it, her championship game.

The burgeoning hip-hop star graciously took time to take us behind all the anticipation and hype.

So, you started your creative career with poetry — how did you get into that?

Do you remember what the first poem you wrote was about?

I remember just being very metaphorical … just going to my house and writing some shit because I was angry. I was about 14 when I wrote my first one.

You grew up in Jersey, right? How did that affect your music?

Being there, there was so much doubt on me and negativity on me. It forces you to prevail through it and work that much harder. If I didn’t have that, I would be too comfortable. All the negativity around me in my school and shit like that caused me to work harder. Sometimes, negativity isn’t always a bad thing, you know?

How did you get started singing?

I always sang. I would always be singing around in the shower, and my sister used to be a singer, too. She was in the chorus, and I would always make fun of her because she was in the band and nerdy and stuff, and I was into sports and that kind of thing. But it’s kind of funny because I’m the one who ended up being in music.

What is she up to now?

She is actually very Christian, and she works at a church in Colorado.

Right, so you always sang, but how did you find your sound?

I don’t think I found it really; I think I just grew into it. It was already in me, because I think if I found it, that would mean I didn’t have it to begin with.

Who are some people whose work inspires you?

When it comes to writing, right now, Frank Ocean is someone who really, really inspires me. But there’s a lot of people. I also actually really look into movies a lot when I’m writing. Like Tarantino, to me, is very good writing.

I fuck with his writing in Inglourious Basterds the most.

What else have you been listening to recently?

From Feature to Main Attraction

So, it’s been over a year since you blew up after being featured on “Ghost Town”. What has the time since that summer felt like? What have you been up to?

I’ve just been focusing on what I learned and how I could use those tools and use that sound. I’ve been using that to make my sound even bigger.

When you were getting started in music, you used to just type in “Drake type beats” into YouTube and rapped over that, right?

So, how has your process changed since then?

Well, we make our own beats now, so that’s a pretty big step. [laughs]

I definitely start by just going through sounds. I sit down with a producer, and I usually stick to the same producers that I’m comfortable with because I just like sticking with them. So, I sit down with them, and I just wait until I hear something that really sticks with me. It always starts with a melody for me and hearing those different notes that I want. I’m basically like a director when it comes to making beats. They’re making it, but when I hear something I like, I’ll start making a melody and freestyle and shit.

What makes you comfortable around the producers you’ve been working with?

I like when they’re open to collaboration. With everything I do, it’s a collaboration. It’s not “You do this,” and I’m not going to have anything to do with it. I like working with everyone who’s willing to work through it.

Your debut album is about to come out. How do you feel?

I’m excited. Really excited. But yeah, I’m kind of nervous; it’s just that natural feeling like you’re about to go play a championship basketball game. And I’m about to go on tour. So, I’m excited, but I’m more so focused on making sure things go right and that I do what I need to do.

Do you have any pre-show rituals on tour?

I definitely pray before every show, definitely pray. And I like to be alone in my head and just won’t say anything. I just really focus on what I need to do.

Back to the new album, what was your mindset like going into the studio to record?

It was just very focused. I felt like it was a matter of being really, really disciplined.

I feel like your songs grapple with a lot of really intense topics … How does it feel putting such deeply personal aspects of your life out to the public?

Well I always get anxious before I’m about to put something out in the world because when I’m making it, I don’t realize. I don’t really think about how I’m going to be putting it out there. I’m just venting, you know? I’m not thinking about it like, “Oh, I’m about to put this out for people.” I only realize that once it’s actually out there.

What effect do you hope your album has on your listeners?