Andrew Yang congratulates Grimes and Elon Musk on their baby 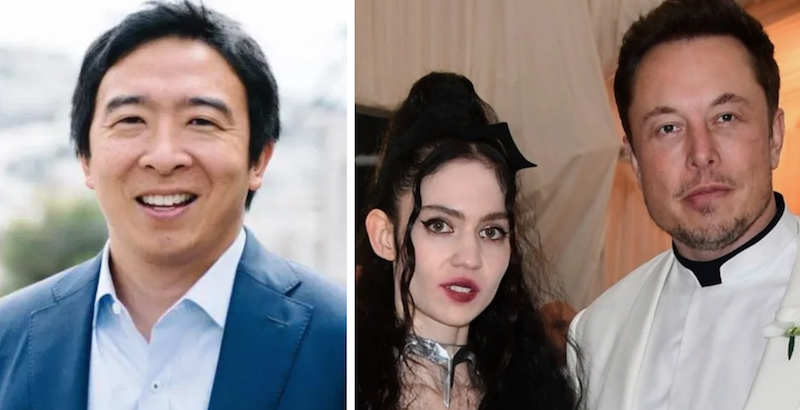 Andrew Yang and Grimes and Elon Musk (photo by Getty)

Prince Harry and Meghan Markle might’ve made headlines yesterday with their announcement to “resign” from the Royal Family, but it was another high-profile couple that actually broke the internet into pieces. Using a semi-nude Instagram photo of herself, Grimes announced that she and boyfriend Elon Musk are expecting their very first child together.

Reactions to the pregnancy news were swift. Some poked fun at the unlikely duo and their bundle of joy, while others — such as presidential candidate Andrew Yang — offered their sincere best wishes.

As TMZ points out, Yang was one of the first to congratulate the happy couple. “Congrats,” he wrote on Twitter Wednesday evening. “That’s amazing!”

The Democratic politician has been pretty embedded in the music world as of late. Not only did Yang just recruit Donald Glover, aka Childish Gambino, to be a “creative consultant” on his 2020 campaign, but he also had Weezer perform at one of his recent rallies. Yang also once described himself as an “ex-goth”.

Grimes and Musk started dating in 2018, when they made their public debut on the Met Gala Red Carpet. They’ve since been spotted doing cute, couple-y holiday things like pumpkin picking. Their relationship has landed them in some legal hot water, though.

Outside of all the romance, Grimes is gearing up to release her long-awaited new album, Miss_Antropocence, next month.