"I may be guilty of being a loud mouth jerk at times, but trying to label me racist is a joke" 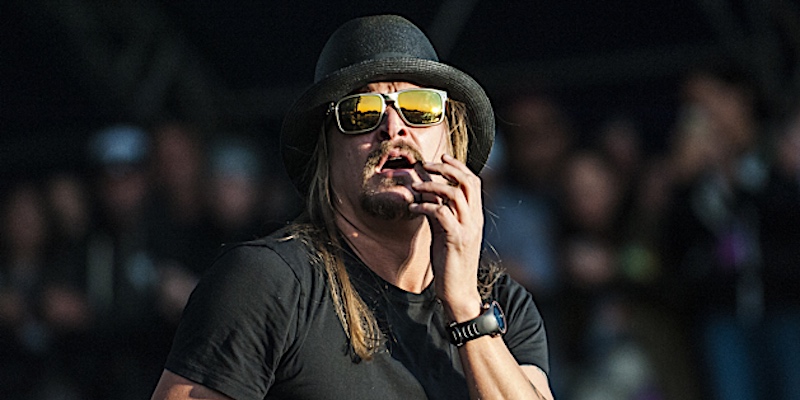 Kid Rock will not renew the licensing agreement for his Made in Detroit restaurant at the Little Caesars Arena amid a new round of backlash against the singer. The decision comes as the Michigan National Action Network planned to hold a media event outside the Detroit restaurant to admonish the rocker for his recent comments about Oprah Winfrey.

As reported last week, Kid Rock recently delivered a drunken rant at his Nashville bar, saying, “Oprah Winfrey, she’s like, ‘I’m gonna get white women to believe in this shit.’ Well, f**k her, she can suck d**k sideways.” The singer went on to insist he wasn’t racist before passing out, and being dragged off the stage by armed security. He later claimed on Twitter that his disdain for the famous talk-show host stemmed from the booking policy on The Oprah Winfrey Show.

In a new Facebook post on Wednesday morning (December 4th), Kid Rock announced his decision to shut down his hometown Detroit restaurant once its licensing agreement ends in April 2020. He also took the opportunity to blast his critics, including the National Action Network and its founder, Al Sharpton:

“I will not be renewing my licensing agreement for my Made In Detroit Restaurant this April.

I appreciate all who have patronized our place and still have much love for the City of Detroit and the people / organizations that I have helped there for years, black, white, whatever, but learned long ago, go where you’re celebrated, not tolerated.

I guess the millions of dollars I pumped into that town was not enough. I will let the NAN network and others go ahead and take the wheel now. Good luck.

I may be guilty of being a loud mouth jerk at times, but trying to label me racist is a joke, and actually only does a disservice to the black community, which I have supported my entire life, by trying to alienate myself and many others.

PS – Hey Al Sharpton, you or your cronies will never beat me you tax evading, race baiting clown!

Ilitch Holdings, the company which owns Little Caesars Arena, alluded to some of the controversy surrounding Kid Rock in its own statement:

“We have been in contact with Kid Rock. He has voluntarily decided not to renew his licensing agreement for the Kid Rock’s Made in Detroit restaurant which comes up for renewal in April. We are in the business of amazing and inspiring our fans and guests through an incredible array of world-class sporting and live entertainment events. As our venues are open, inviting, inclusive, and respectful to all, we look forward to bringing on an exciting new concept that aligns with our community and company values.”

Both statements came after the Michigan National Action Network announced it was holding a media event on Wednesday to “discuss and respond to questions about the reprehensible tirade directed at Oprah Winfrey and others by Kid Rock.”

This isn’t the first time Kid Rock’s restaurant stirred up protests. When it opened along with the arena in 2017, the musician faced backlash over his use of a Confederate flag as a stage backdrop during his concerts. Little Caesars Arena is home to the NBA’s Detroit Pistons and NHL’s Detroit Red Wings.