It’s Larry vs. a toaster in first teaser for Curb Your Enthusiasm season 10: Watch 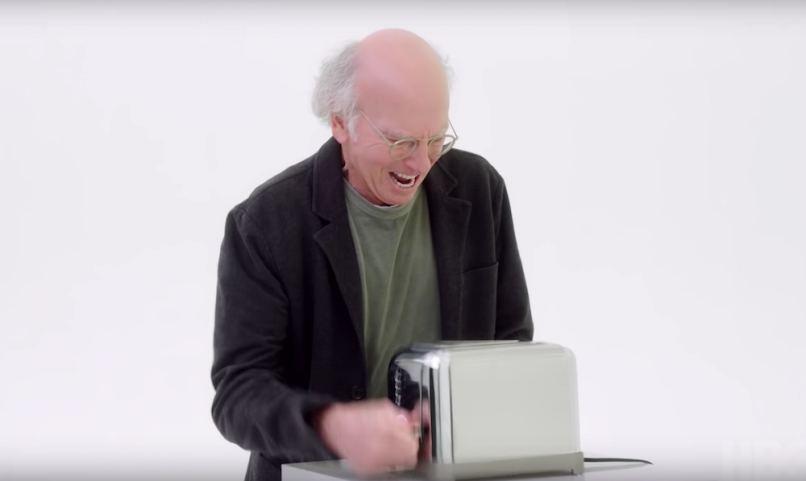 Larry David in Curb Your Enthusiasm

The long-awaited first look at season 10 of Curb Your Enthusiasm is finally here. HBO has shared a teaser clip for the new season, and it’s quite literally Larry David vs. a toaster.

In the clip, David stands around in a completely white room looking frustrated. What’s getting on his nerves? A toaster, of course. He stares it down while waiting for his toast to pop and can’t help but grow impatient, rattling the toaster, chugging a cup of coffee, and eventually screaming into the air. “We can’t wait either,” the screen reads. Then the music cues up and it’s revealed that season 10 is on the way.

As previously announced, Curb Your Enthusiasm will return in January of next year. Production on the new season began in October 2018, so it’s been a long time in the making. Of course, it’s worth the wait given this new season will feature Wilco’s Jeff Tweedy as a character who reportedly pals around with David’s co-star Jeff Garlin.

Update: Watch the full trailer for Curb Season 10 ahead of the season premiere on January 19th, 2020.

The usual cast members are expected to appear in season 10. The sole exception is Bob Einstein, who played Marty Funkhouser, who passed away this year at age 76. His mark on the show is memorable to say the least. In fact, he was such a fun character that Radiohead’s Jonny Greenwood used to check into hotels under his character’s name.

If all of this is news to you because you didn’t hear, Curb Your Enthusiasm returned after a five-year hiatus in October 2017 with its ninth season. That season went on to receive Emmy nominations for Outstanding Comedy Series and Outstanding Actor in a Comedy Series for David.