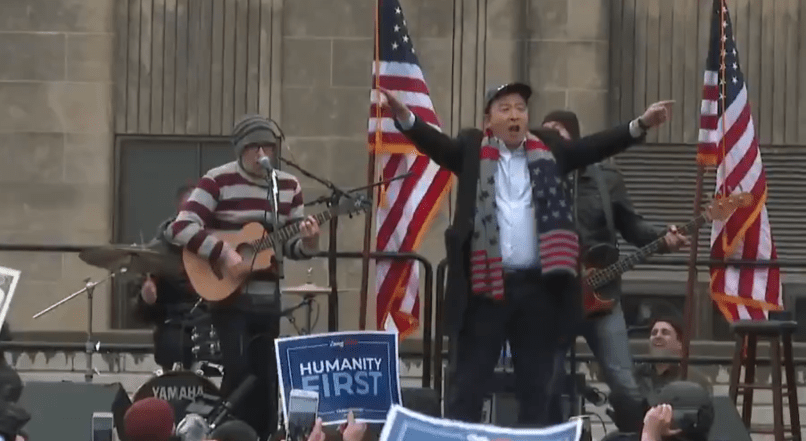 On Friday, Weezer frontman Rivers Cuomo played an Andrew Yang political rally in Des Moines, Iowa. For the event, dubbed Yangapalooza!, Cuomo was joined by Weezer bassist Scott Shriner. Together with a drummer, they performed a set divided between old Weezer favorites and covers from 2019’s The Teal Album (via Pitchfork).

Cellphone footage captured snippets of “No Scrubs”, “Africa”, “Take on Me”, as well as Weezer classics like “Buddy Holly”, “Island in the Sun”, “Undone – The Sweater Song” and “Beverly Hills”. For “Say It Ain’t So”, Weezer was joined by Andrew Yang himself. The presidential hopeful, a self-identified “ex-goth,” danced in place and sang along with the band. Check out some clips below.

At one point, Rivers Cuomo said, “Yang gang in the house,” but otherwise offered no explicit endorsement (the implicit endorsement, of course, is just showing up). Cuomo previously donated money to the Yang campaign.

Yang is hardly the first candidate to pick up a celebrity endorsement. By our subjective count, the leader in that category is Bernie Sanders. Just last week Jack White came out in support of Sanders, joining Cardi B and Killer Mike in endorsing the Vermont Senator.

The same day that Cuomo played Yangaplooza!, he shared “Backflip”, the theme song to Netflix’s Green Eggs and Ham. Next spring, Weezer is expected to drop their newest album Van Weezer, and next summer they’re embarking on the “Hella Mega” tour with Green Day and Fall Out Boy. Tickets are available here.

Things that happen at #Yangapalooza: @Weezer performing No Scrubs pic.twitter.com/CwsPShjWdq