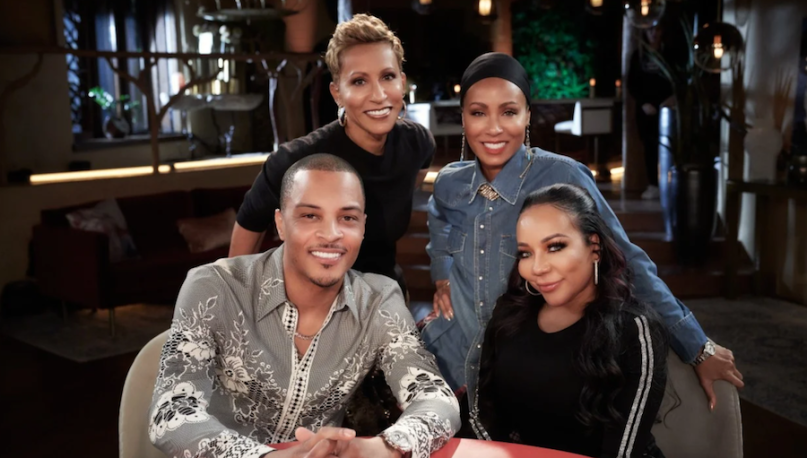 Earlier this month, T.I. became the center of controversy when he revealed he had a doctor check for his daughter’s virginity. On Monday, he addressed the cringeworthy comments on an episode of Jada Pinkett Smith’s Facebook chat show Red Table Talk.

The original remarks came during a now-deleted episode of the Ladies Like Us podcast. T.I. claimed he took his teenage daughter, Deyjah, on “yearly trips to the gynecologist to check her hymen.” He went so far as the assert pressuring her to remain a virgin would make sure she remained chaste. “[Virgins] — they’re no fun. Who wants a virgin? Like really? All that work,” he said.

For his appearance on Red Table Talk, Tip was joined by his wife, Tiny Harris, ready to answer questions about what he dubbed “hymen-gate.” He immediately categorized the Ladies Like Us comments as having been delivered “in a very joking manner.” He said though he spoke “from a place of truth, I began to embellish and exaggerate. And I think a lot of people took it extremely literal, because if you put any of my reputation, who I am as a father, who I’ve been, I honestly thought people knew me better.”

Smith asked if he understood the “sensitivity” that surrounds something like a young woman’s virginity and her OBGYN visits. “No, I did not” replied a bewildered T.I. “I understand it now, absolutely. However, my intentions, I think, have been terribly misconstrued and misconceived.”

Tip then set about correcting the record. He clarified he never said he was in the exam room with Deyjah. He also claimed these yearly doctors visits weren’t “present day,” with Tiny adding that Deyjah was 15 and 16 at the time. Tiny herself stated she was also present during these examinations. “Most fathers don’t go, but he was present,” she said. “He didn’t make the doctor’s appointment, there was already an appointment.”

While T.I. said neither Deyjah nor her mother had an issue with his presence at these doctors visits, the former was certainly upset that he broadcast it to the world. “I am incredibly apologetic to her for that. To her,” he said, before turning to the camera and adding, “To you, sweet baby Deyjah.” It was apparently Deyjah who asked her father not to further comment on the initial remarks, something T.I. respected until “different directors” advised him to “clear it up.”

Smith then explained how she perceived T.I.’s intention, stating that she understood he was coming from a place of wanting to “protect” his daughter. As soon as she brought up the word “control,” however, Tip’s face twisted. “In order to guide or direct, you must have a certain level of control of anything,” he retorted. He went on,

“In the age or time where our women, black women, are the most unprotected, unattended, disregarded women on the planet, I’m being criticized because I’m willing to go above and beyond to protect mine. And I’m talking about all the slimy, grimy, chubby fingered little boys who just want to come defile and destroy the sanctity… Anything that is the most important thing to me in my life, I am going to deal with that with very extreme care. I don’t understand how that is looked at as being so wrong. For their to be malice there must be ill intent. If i’m going to the doctor with you just for the sake of controlling you, then okay. But if I’m going for the purpose of being a protective parent, there’s no such thing as being overprotective. There’s protected, and unprotected.”

He continued explaining how culture and media have “blurred” the lines of what “love, beauty, life, sex” are, and how he saw it as his responsibility to instill in his children an understanding of “what is acceptable, what is unacceptable.” Smith agreed that helping her girls have “a level of understanding and maturity” before entering into sexual relationships was important, but it shouldn’t be about “the virginity.” To this, T.I. explained that, for him, it was about knowing how to best prepare her for relationships with young men, whom he didn’t paint in favorable terms: “You can’t get your feelings wrapped up in this, now. This is a physical urge, this is animalistic urges taking over right here. This is not an emotional, romantic encounter for this gentleman. I don’t think it is.”

Asked how he would react if he’d discovered Deyjah had lost her virginity before 18, T.I. said he viewed losing your virginity as “ending your childhood.” “I can’t let you run around trying to adult the luxuries of adulthood without any of the responsibilities of adulthood,” he said, pointing to birth control, finances, and how “you need to have a plan together, because if you figured this out, you need to have all this figured out too.”

Smith’s mother and co-host, Adrienne Banfield-Norris, brought up the idea that T.I. would react differently to one of his young sons losing their virginity, and he didn’t shy away from admitting he would:

“If my son goes out and gets a girl pregnant, how is the household change for those nine months? The household does not necessarily change those nine months. Whereas if my daughter come home, my household is changed immediately. So the stakes are higher… This is the thing about the female body. I think the conversation is very different when it comes to mom then when it comes to dad. I know it, and I don’t understand it. The same thing talking about the virginity of my daughter versus the virginity of my son. It’s the same conversation around mom versus dad. Mom can tell daughter not to cut her hair, not to perm her hair, not to color her hair, not to get piercings or whatever — but she can give her body away to anybody she wants to without pops saying anything.”

Smith then went on to explain what a “patriarchal structure” is, a phrase that seemed to truly faze T.I. You can hear her explain feminism to him and listen to the full discussion by watching the video below. There’s also a tease for a follow-up episode, in which T.I. will apparently discuss being unfaithful to Tiny.