Sleater-Kinney play “Can I Go On” on Corden for first post-Janet Weiss TV performance: Watch 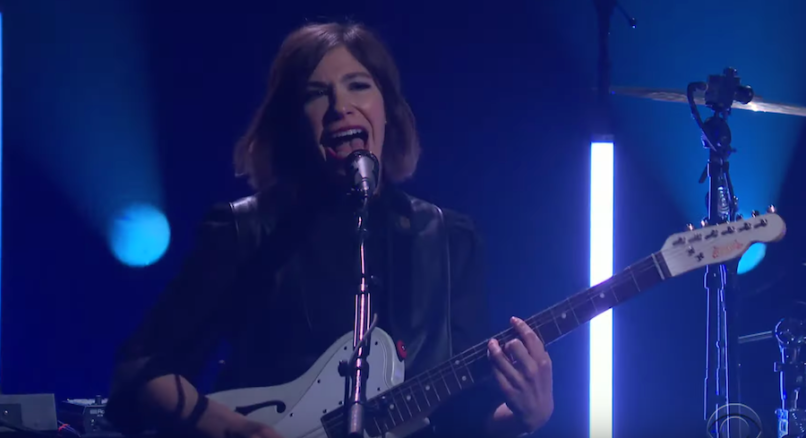 Sleater-Kinney on The Late Late Show with James Corden

It’s been five months since Sleater-Kinney last performed on television, and the band looked quite different back then. At the time, they were supporting their then-forthcoming new record, the St. Vincent-produced The Center Won’t Hold, with an appearance on Fallon. They also still counted drummer Janet Weiss as part of their lineup, as this was less than two weeks before she announce her departure from the band. Cut to now, the album has been out for months, and the tour behind it is well underway with replacement drummer Angie Boylan.

On Thursday, Sleater-Kinney returned to late night to deliver “Can I Go On” for their first Weiss-less TV performance on Corden. As they’ve been demonstrating on the road for weeks now, the band is still at full force with the new lineup. Carrie Brownstein and Corin Tucker still howl and shake with their tense dynamics, the latter in particular finding about a dozen levels on the bridge alone. Yes, the band looks different (oh, hi Toko Yasuda!), but they’re still the punk rock greats that put out some of the best music of the last decade.

Watch Sleater-Kinney perform “Can I Go On” below. They also still have a few more North American tour dates set for this month, with a European run to follow early next year. Get tickets here.

Weiss, meanwhile, was involved in a nasty car accident back in August. Her sister set up a GoFundMe page to help cover medical expenses, and Janet has been providing periodic updates on her recovery. As of November 2nd, she was back on her feet with the aid of a crutch or cane, and was given the all-clear to use her left arm again. She’s reportedly back working on music with her bands Quasi and Slang.

Revisit Sleater-Kinney’s recent appearance on Kyle Meredith With… below.