James Holzhauser, Ken Jennings, and Brad Rutter will face off for the first time 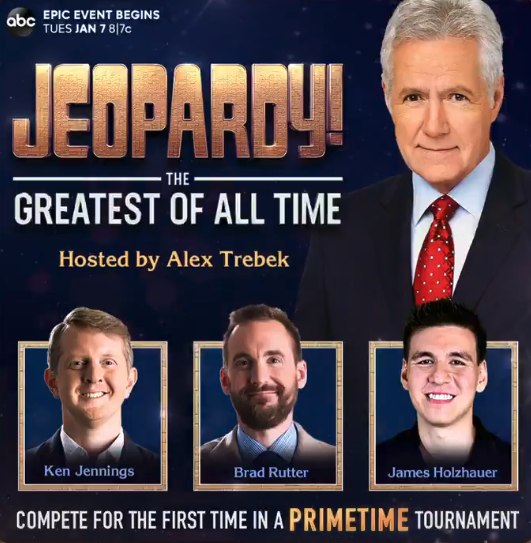 Jeopardy! The Greatest of All Time airs beginning January 7th

The three winningest contestants in Jeopardy! history will face off for the first time in a primetime special.

The multi-night tournament event, appropriately titled “Jeopardy! The Greatest of All Time”, will see James Holzhauser, Ken Jennings, and Brad Rutter competing against one another for a $1 million grand prize. The first contestant to win three games will be crowned the champion.

The tournament begins Tuesday, January 7th at 8:00 p.m. EST on ABC, with subsequent episodes scheduled for the following Wednesday and Thursday. If necessary, additional episodes will air Friday and the following week (Jan 14th-16th).

The top three contestants in JEOPARDY! history will face off in an epic primetime special event: “JEOPARDY! The Greatest of All Time,” starting January 7 at 8|7c on ABC. #JeopardyGOAT pic.twitter.com/7PJUi57206