Film Review: Waves Misses the Mark As It Documents the Rise and Fall of Privilege 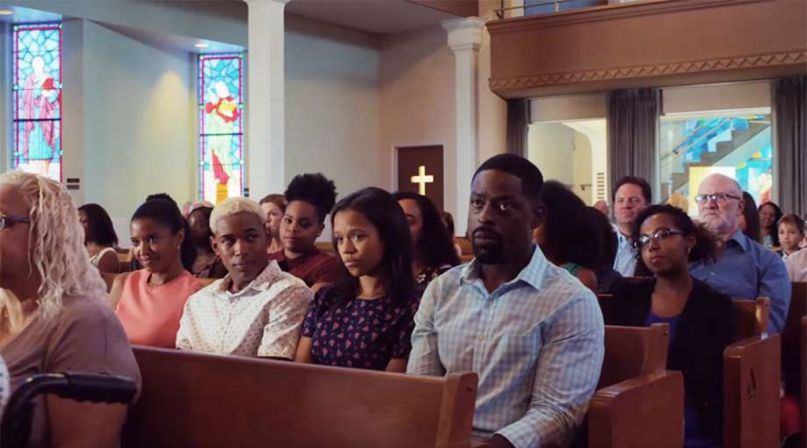 This review originally ran in September as part of our TIFF 2019 coverage.

The Pitch: High school student Tyler (Kelvin Harrison Jr.) has everything: a promising wrestling career, a beautiful girlfriend named Alexis (Alexa Demie), and a comfortable upper-middle class life. His seemingly perfect life, however, is falling apart. He has a career-ending shoulder injury, Alexis may be pregnant, and his parents, particularly father Ronald (Sterling K. Brown), have unrelenting expectations of his success. As the pressure on him mounts, Tyler resorts to lying, drinking, and drugs, leading to a preventable tragedy that changes everything.

2 for 1 Storytelling: Writer and director Trey Edward Shults’ two hour plus opus isn’t simply content to tell Tyler’s story. The film takes an abrupt turn at the halfway point, pivoting to focus on Tyler’s sister Emily (Taylor Russell) as she navigates the fallout of the film’s first half. Structurally, this is an interesting idea on paper: Emily is only really seen on the periphery before this point, so moving a character from the margin to the centre teases the possibility of opening the story up to new directions.

Unfortunately, the result onscreen is far less successful. Shifting leads forces Shults to dedicate a significant amount of time and energy in order to establish who Emily is and why the audience should invest in her emotional journey. This includes her tentative romance with Luke (Lucas Hedges), a boy from the wrestling team who has his own family baggage that mirrors, and eventually forces, Emily to address her issues.

An Awkward Balance: While the first half of the film is more exciting, it’s also alarmist and sensationalistic. Tyler’s fall from grace is like a row of dominoes and seems to happen so quickly it verges on Lifetime melodrama. All it takes is one false move and he goes from king of the world to completely destroyed, seemingly in just a few weeks.

Alas, the second half of the film doesn’t work much better. The slower pace works to reflect the narrative, but after the rollercoaster of the first half, Emily’s section feels draggy and Waves suffers without Harrison Jr’s performance. Despite Russell’s best efforts, Shults’ script fails to make the latter half of the film as engaging and, as a result, the film ends on a low note.

Young Talent: As the de facto leads of their respective sections, both Harrison Jr. and Russell are excellent. The former gets the showier role: As Tyler’s life crumbles around him, the golden boy who has always been the star of the family completely spirals into self-destructive aggression and substance abuse. It’s tough to watch, but Harrison Jr. delivers such a raw, magnetic performance that he completely dominates whenever he’s on screen.

In contrast, Russell is given more introspective material to work with, so while her performance is less ostentatious, it’s more grounded and less showy. Unfortunately, Russell and Hedges don’t have much chemistry and Emily’s storyline is frequently overshadowed by Luke’s issues with his estranged father, even if it’s intended to comment on her own family relationship. As a result, Emily winds up playing a supporting role in her own story.

Hypnotic Camerawork: Schults’ struggles at the typewriter don’t extend to the camera — here, he’s at his strongest. In the first half of Waves, the camera is on the prowl, constantly on the move in order to seek Tyler out. This helps to generate a propulsive energy that speaks to Tyler’s frenetic lifestyle that, when matched with the film’s soundtrack of rap anthems and a pounding score from Trent Reznor and Atticus Ross, makes it feel like a music video or a marketing campaign. It’s so effective that it’s nearly draining; the sheer momentum and energy feels unsustainable.

Shults calms the pace down considerably in the second half to match Emily’s speed. In order to replicate how Emily is lost in her head, there are frequent close-up shots of her staring off in the distance in one location only for the camera to pull back and reveal the time and location have shifted, seemingly without her noticing.

There are also multiple visual callbacks in both halves that serve to link the siblings (despite their separation). In each section, car rides are filmed in slow 360 pans; both brother and sister stick their heads out of the window and they make out with their significant other in a body of water. The visual symmetry is subtle, but effective at drawing the connection between their shared experience.

The Verdict: In spite of sensational direction from Trey Edward Shults and raw, emotive performances by Kelvin Harrison, Jr. and Taylor Russell, the polarizing two narrative halves of Waves don’t gel to produce a satisfying whole. The first half is an energetic Lifetime movie about a boy’s fall from grace, while the second half offers grounded realism, only it feels draggy and loses its focus. High points for ambition, but Waves misses the mark.

Where’s It Playing? Waves crashes into theaters on November 1st.