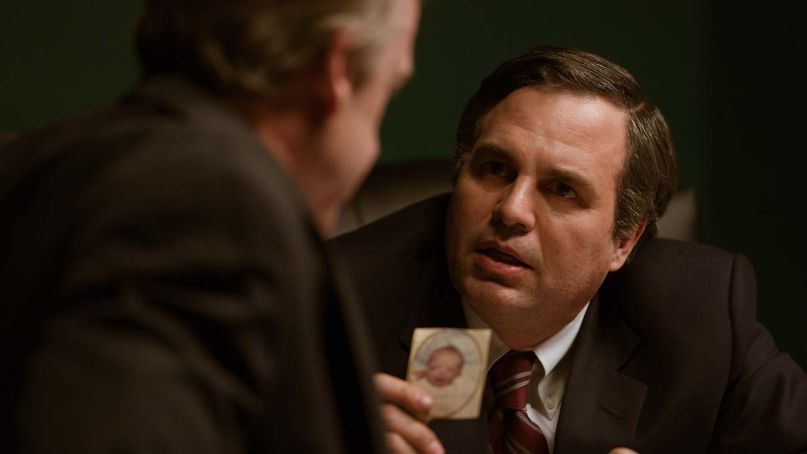 The Pitch: Not long after rising to prominence at a prestigious Ohio law firm, corporate defense lawyer Rob Bilott (Mark Ruffalo) is approached by farmer (and distant family friend) Wilbur Tennant (Bill Camp). Shortly after the construction of a DuPont landfill near his farm in West Virginia, his cows began getting sick, developing grotesque deformities, and dying en masse. As he keeps tugging on this particular string, however, he ends up unraveling a vast coverup involving the vast, knowing poisoning of the American public by DuPont via everything from Teflon to tap water. Over the next two decades, Bilott commits himself wholeheartedly to fighting for DuPont’s victims and holding the powerful accountable.

Something In the Water: If the aforementioned plot description sounds incredibly straightforward, that’s because Dark Waters is exactly that kind of movie. Filmmaker Todd Haynes has spent the last 30 years crafting stylish, idiosyncratic stories about outsiders and the stifling confines of American society (Carol, Safe, Far From Heaven). Here, he’s in pure journeyman mode, filming a by-the-numbers docudrama that, honestly, anyone could have made.

Based on Nathaniel Rich’s New York Times feature story “The Lawyer Who Became DuPont’s Worst Nightmare,” Dark Waters is the kind of A-Z procedural we associate with films like Erin Brockovich, The Insider, and Spotlight (whose reputation Dark Waters’ marketing hinges heavily on). They’re simple but effective movies of corporate intrigue and brave truthtellers speaking truth to power, putting a dramatic gloss on real-world horrors. Dark Waters is exactly that, no more and no less: it’s handsomely presented, but hardly drips with personality.

That said, there are glimpses of Hayne’s incredible attention to detail in the mix, which dovetails nicely with Dark Waters’ fact-based storytelling. The washed-out, blue-grey cinematography from Haynes stalwart Edward Lachman locks its characters in a grim, depressing world devoid of hope or agency. It hardly ever seems sunny out; even indoors, courthouses and law firms are steeped in fluorescent office lighting.  Children smile with blackened teeth.

The film was shot on location in Cincinnati, in the heart of coal country: the air is filled with particulate matter, snow and smoke and clouds of asbestos. The entire world looks sickly, which underscores Dark Waters‘ point that corporate negligence and lack of regulation is poisoning us all.

The Wheels of Justice Are Slow to Turn: Haynes has said he chose to direct this film out of outrage at the injustices committed by DuPont, and it’s a relatable impulse. Who wouldn’t be righteously outraged at the revelation that one of America’s most powerful corporations was willfully poisoning its citizens for the sake of profit?

Dark Waters appeals to that sense of outrage, for both better and worse: as the years go by (accented by newspaper-style interstitials), we see the ups and downs of Bilott’s quest to singlehandedly hold DuPont accountable for their negligence. Friendly colleagues, like DuPont head lawyer Phil Donnelly (a prissy Victor Garber), turn sour once Bilott starts investigating them; Bilott’s managing partner Tom (Tim Robbins, the kind of guy who’d gravitate to this kind of social-justice story) quickly grows sick of the money the firm is hemorrhaging on this wild goose chase, and so on.

As he makes more and more progress, Bilott even grows paranoid that DuPont wants to put his life in danger. It’s these moments that Dark Waters delves into more traditional thriller territory, and is all the better for it. One brief moment where Bilott hesitates to turn his car on — what if there’s a bomb? — is a necessary nail-biter for a procedural like this, but otherwise, Dark Waters sticks to convention.

Don’t Talk to Me Like I’m the Wife: That said, it’s hard not to feel a sense of wasted potential with a cast like this. Ruffalo’s blubbery, wide-eyed conviction was one of the few wrinkles in Spotlight‘s otherwise sober presentation of its material. In Dark Waters, he’s front and center, and his Rob Bilott, while an admirable man of conviction, doesn’t feel all that unique compared to more idiosyncratic cinematic investigators like Julia Roberts’ Erin Brockovich or Redford and Hoffman in All the President’s Men.

That’s to say nothing of poor Anne Hathaway, trying her damndest to spice up a supportive-wife role. Sure, screenwriters Mario Correa and Mathew Michael Carnahan give her the occasional juicy tirade with lines like “don’t talk to me like I’m the wife,” but they forget to write her as anything but. Her contributions are largely in the background, the former legal professional who gave up her career to support their family, but buckles under the strain Bilott’s dedication to this case puts on all of them. There are some between-the-lines snipes at the sexism of the legal profession (especially the way it effectively forces out female lawyers who have children), but it’s not given quite the focus it deserves.

That said, both Bills in the cast lend relish to their respective roles, Camp as a thickly-accented farmer doomed by his own convictions and Pullman as the very model of a Simple Country Lawyah.

The Verdict: It’s tough to decide what to truly make of Dark Waters. In its own context, it’s a thoroughly gripping, informative and appropriately alarming look at the insidiousness of unregulated corporate greed and the lengths to which American industry will go to hold on to profit and power. But in the spectrum of Haynes’ other work, it feels like the kind of ‘one for you, one for me’ studio work a guy like him doesn’t normally traffic in. As legal dramas go, it’s quite good; as a Todd Haynes film, you struggle to see the talent for which he’s known.

Where’s It Playing? Dark Waters sneaks into your bloodstream and in limited release on November 22th, going wide December 6th.

Previous Story
Top 25 Pop Songs of the 2010s
Next Story
…And You Will Know Us by the Trail of Dead mark 25th anniversary with new album, share “Don’t Look Down”: Stream
Popular
More Stories
[fu-upload-form form_layout="media" title="Submit Your Photo"][input type="hidden" name="ugc" value="1"][/fu-upload-form]