Film Review: Charlie’s Angels Soars In the Hands of Women 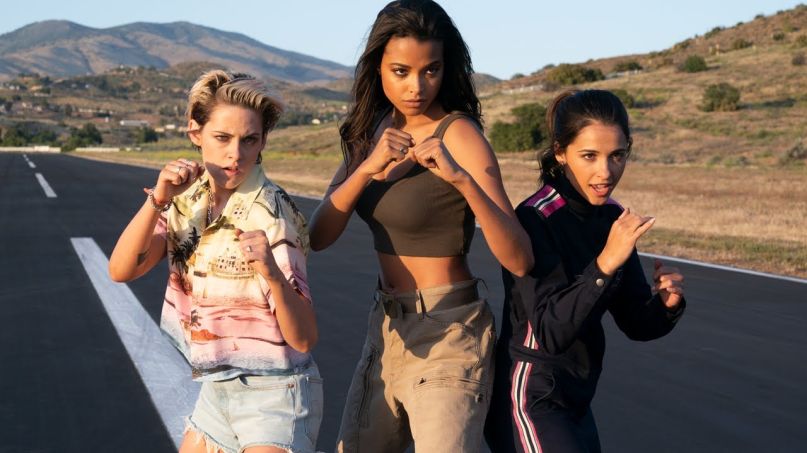 The Pitch: It’s a new morning, angels. Elizabeth Banks writes and directs the latest adaptation of the ‘70s ABC crime series as an overtly feminist feature film. Gone is McG’s ogling, as is the ‘Jiggle TV’ mantra of bad ‘70s television. Banks actualizes the Angels’ potential, instead offering an upbeat girls’ club action comedy. (The soundtrack, the costumes, and the cameos ain’t bad either.)

While growth and change from past iterations of the Angels brand are acknowledged, the new movie reframes the core concept through a global cabal of morally righteous femme agents. The Townsend Agency continues to employ fierce women around the world in service of all-purpose espionage: spies, secret agents, moles, whistleblowers, private investigators, you name it. It’s an international coalition of willing and able women, taking down the bad guys. Here, the reintroduction focuses on three new agents in particular; there’s the hip Sabina (Kristen Stewart), the militant Jane (Ella Balinska), and their handler Susan Bosley (Elizabeth Banks).

The crime? The theft of a new energy source, an Apple-looking thing involving blockchains and blue LEDs and EMP and other such technobabble. The engineer behind it? Elena Houghlin (Naomi Scott), who’s afraid of her device’s possible military applications. MacGuffin, meet the Angels. Angels, get that damn light box back before it falls into the wrong hands. Charlie’s Angels stages a race against time, makes a solid case for reboots, and stands apart as an agreeable popcorn flick about Donna Summer-style bad girls pushing back in a man’s world.

The Heaven of Starting Over: Look back at the credits for 118 episodes of Charlie’s Angels (via the original run and its short-lived 2011 reboot) and two pricey movies, and you’ll see that the exploits of the female-driven Townsend Agency have been directed by a woman just once before now. That’s right: one total woman, among dozens of dudes, has directed one of pop culture’s pre-eminent properties built around female heroism. Angela Robinson, we salute you. And keep that in mind when you catch the refreshingly upbeat (and uplifting) feelings that Banks’ Charlie’s Angels brings to the big screen.

The shift in tone is felt, and deeply appreciated. Banks, goes all in and shows a strong hand, and a sense of voice for women anywhere. (Like, could you imagine Aaron Spelling’s show featuring an opening credits montage of girls from around the world just living their lives, while a Kash Doll song about women being united plays? And thank heavens, those early 2000s flairs like shimmery post-Matrix action and dubious music choices a la Prodigy’s “Smack My Bitch Up”? They’re out.)

Callbacks and camp are nominal; the vibe here lands somewhere between pop and pulp. And best of all, it passes the “is this fun?” test in a big way with its leads, its sense of play, and the opportunities it takes to say something about becoming and being a powerful young woman. Action scenes play nimbly and find little surprises within, even while dealing in plenty of chases, fisticuffs, and stakeouts. Banks paces the movie like a great hour of TV, with plenty of cliffhangers and threads to be pulled.

And the Angels themselves? They strike a welcome balance between confident idealism and an urge to rock. Stewart has a funny bone she doesn’t often get to exert onscreen, and here she demonstrates a knack for warbling old espionage platitudes (over and out!) to amplify their innate silliness. Balinska is downright suave as the ex M:I-6 agent Jane. But perhaps, most usefully, Banks makes Scott’s Elena the dramatic through-line of the story. It’s right there from her first moments onscreen: While trying to convey concerns about testing her new technology, a smarmy marketing executive (Nat Faxon) not only balks, but then has the gall to make a pass at her. Later, when Elena tries to blow the whistle, the swiftness with which rich, arrogant men try to exterminate her is both absurd, and sadly – in this film’s loud and fast way – believable.

From the first shot of Stewart asserting that women deserve choice while distracting an idiot, to images of the Angels disco dancing in unison to case a party, Banks doesn’t let up on the positivity at the center of her reboot. If only James Bond had a therapist/masseuse/dietician on call, his depression (and alcoholism) might be under control. To hell with ‘taking it like a man,’ the Angels are now about taking care of themselves and each other.

Wage Gap: Another fact, perhaps not so fun. Based on existing information, this latest reboot cost less than half of the budget for the 2000 blitzkrieg of same name. One line of thought would suggest that Sony didn’t feel like spending big for a semi-proven IP with waning fandom. Another thought, more cynically, is that maybe they didn’t want to invest too heavily in a female-forward reboot. Unfortunately, it shows its budget at times with cheap digital explosions, VFX-assisted shots that appear shoddily rendered, and stock photography of exotic locales that appears to run at a different resolution from the actual film. It’s frustrating, because it’s distracting. But you know what? Banks and her leads walk through it all confidently. For every noisy digital shot or shortcut bit of editing, there’s a crisp Thomas Crown Affair tilt from DP Bill Pope, or a great one-off joke about poisonous Altoids. Wigs, gadgets, one-liners, and costume changes are the tools of this film’s Lichtenstein-like spycraft.

Music That Pops: This is a bit of throwaway praise, but the soundtrack just hooks. To be precise, there’s a playlist here of glossy, bell-driven, hook-happy tracks that work and enhance the show. Kash Doll shouting out to all the ladies and demanding hands up around the world feels so positively Moulin Rouge!. There are songs, really catchy ones, from Nicki Minaj, Anitta, Danielle Bradbery, and others. They even brought out Chaka Khan for this! And how’s this for the dork test? 15 minutes after exiting the screening, Lana Del Rey, Miley Cyrus, and Ariana Grande’s “Don’t Call Me Angel” was on repeat in this writer’s car. Can’t stop the feeling they say. And the mood feels right with Angels’ arsenal of female vocalists bringing their jams.

The Verdict: It’s got twists without being tawdry. Attitude, with sincerity. And Banks offers a reasonable rebuke to past ickiness, playing up the best elements of an old TV show’s original idea. Charlie’s Angels 2019 flies in the face of its tricky franchise past, and makes for a solid evening’s entertainment. It feels like a course correction on the whole concept, written, directed, by, for, and about women.