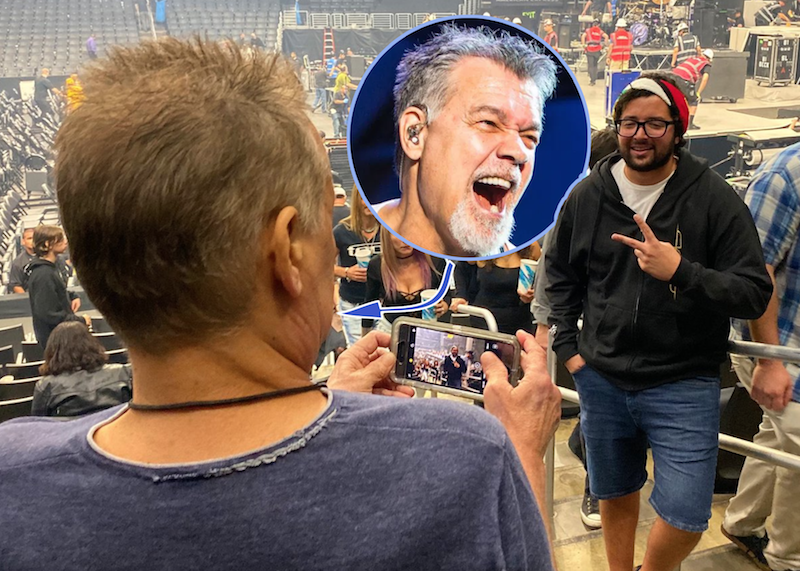 Kids these days with their cellphones, they think they can walk up to any rock and roll icon and ask for a picture. Or, in the case of one Tool fan, ask a legend like Eddie Van Halen to be his personal cameraman.

The Van Halen guitar god was attending Tool’s show in Los Angeles on Monday night with his son and bandmate, Wolf Van Halen. After the performance ended, an unknowing fan of Maynard James Keenan’s outfit asked the elder Van Halen to snap a pic of him standing in front of the stage. The guy had no idea to whom he’d just handed his phone, and that tickled Wolf something fierce.

“A guy asked my dad if he could take a picture of him with the stage behind him, having no idea who he just asked,” Wolf Van Halen captioned a photo of the interaction on Twitter, “and that was my favorite moment from the @Tool show last night.”

We’re not sure what that says about the actual concert, but it’s still pretty funny. Check out the snap below.

A guy asked my dad if he could take a picture of him with the stage behind him, having no idea who he just asked, and that was my favorite moment from the @Tool show last night. pic.twitter.com/tA1lywM0yf

Van Halen must be something of a blindspot for modern generations. Back in May, David Lee Roth crashed a hotel party where a bunch of EDM bros were blasting Van Halen — and seemingly none of them knew who he was.

The better news here may be that Eddie Van Halen is out and about. The rocker has been battling throat cancer, traveling back and forth between Germany and the US as he seeks treatment. While it seems he’s fighting back as much has he can, it’s possible his medical issues are the reason Ross has said, “Van Halen is finished.” With the band apparently over, Roth is focusing on his upcoming Las Vegas residency, tickets for which can be found here.