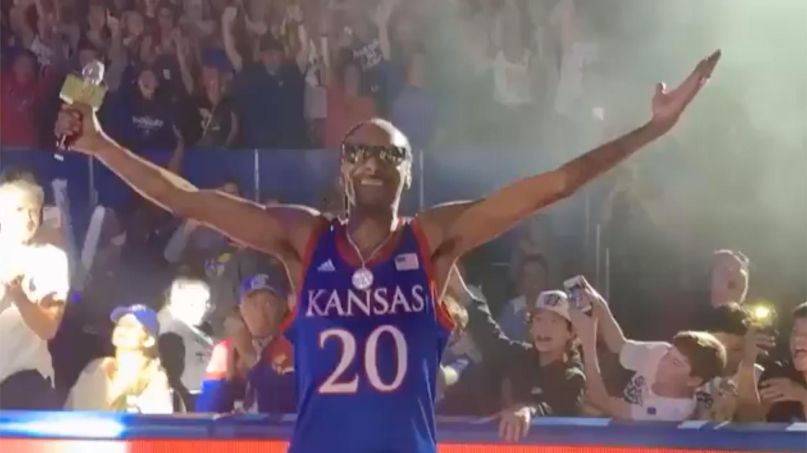 Snoop Dogg at University of Kansas

The University of Kansas, which is currently facing NCAA violations over a lack of institutional control, spent Saturday doing damage control over a Snoop Dogg concert.

The veteran rapper headlined a pre-season college basketball celebration at the university’s Allen Fieldhouse on Friday night. By all accounts, it was your prototypical Snoop Dogg show, featuring scantily dressed women gyrating on stripper poles as the rapper performed unedited versions of 20-year-old songs like “Drop It Like It’s Hot” and “Gin and Juice”. At one point, Snoop even fired fake dollars bills into the crowd using a money gun.

However, the University of Kansas thought Snoop’s antics crossed the line, especially since “we made it clear to the entertainers’ managers that we expected a clean version of the show,” according to Kansas athletic director Jeff Long said.

“I take full responsibility for not thoroughly vetting all the details of the performance and offer my personal apology to those who were offended,” Long added in a statement. “We strive to create a family atmosphere at Kansas and fell short of that this evening.”

In his defense, Snoop Dogg showed enough restraint not to light up any blunts during the show, so technically Kansas did get his clean version.

I love the Snoop Dogg trolling, it’s just no one should be going to prison for this. It’s always been harmless entertainment. Kansas was always a willing participant, always in on the gag. It was never a victim who should be demanding prison time.

Kansas brought Snoop Dogg to perform, decked him out in all adidas gear, had him bring out pole dancers in light of the Georgia Tech sanctions, and then had him shoot a money gun out into the crowd as the NCAA deals with the California bill.

Snoop Dogg really out here in Kansas. 🤣🤣🤣 (via @mswain97) pic.twitter.com/tmSrnO4S3i