The women were then booed and kicked out of the venue 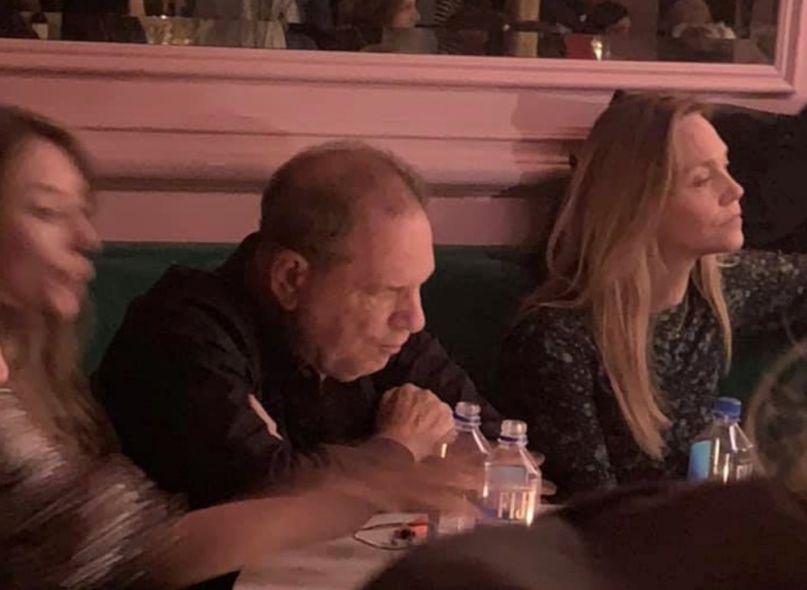 Harvey Weinstein has kept a low profile since numerous women came forward to accuse the Hollywood mogul of multiple counts of sexual assault. In fact, last we heard of Weinstein was back in May, when he’d reached a $44 million dollar settlement with his accusers.

But just as disgraced figures like Louis C.K. have felt emboldened enough to make their comeback, Weinstein, too, has resurfaced. And his return to the public spotlight was greeted with far from a warm welcome.

(Read: A Running List of All the Dudes Accused of Sexual Misconduct Since Harvey Weinstein)

This past Wednesday, Weinstein attended an Actor’s Hour event for young artists at the Downtime bar in New York City, at the request of one of the evening’s performers. While there, he was confronted by at least three women, including performers Amber Rollo, Kelly Bachman, and Zoe Stuckless, according to The Hollywood Reporter.

“I was shocked to see him out, but not because I thought he would have shame, he is a sociopath and clearly has no shame,” Rollo wrote in a lengthy Twitter thread recounting the night.

I was shocked to see him out, but not because I thought he would have shame, he is a sociopath and clearly has no shame. I'm shocked because he was invited to an event put on by and for artists.

“I’m shocked that he was at an event put on by and for artists… Not only was he invited, he was supported,” continued Rollo.

Rollo then detailed how one of her friends confronted Weinstein. “My friend and badass comedian Kelly Bachman was performing on the show and went after the ‘Freddy Krueger’ in the room.” Shockingly though, Bachman’s comments were met with heckles and boos.

“I didn’t know we had to bring our own Mace and rape whistles to Actor’s Hour,” added Bachman in a video posted to Instagram.

Keep getting new followers today is it because my tweets are so fire? lol fuck Weinstein and thanks @ambercrollo ILY #mysecondtweet pic.twitter.com/hLjWn5VM8Y

“Some people didn’t realize what was going on, some artists knew and were scared and some were outright supporting this fucking serial rapist monster,” Rollo added, clearly surprised that some in attendance chose not to rally around her and Bachman, who was a rape survivor.

“I’m comfortable enough to talk about my experience, but when I’m sitting in the room with a monster that people are supporting, it just sucked the air out of my chest,” the 27-year-old Bachman told Buzzfeed News. She also described seeing Weinstein in the audience that night as a “nightmare come to life.”

(Read: How Louis C.K. and the Rest of Us Failed in His Comeback Attempt)

Rollo was eventually asked to leave Downtime after calling Weinstein “a monster.” Stuckless, too, was escorted out of the bar after yelling at the alleged abuser. “I was kicked out of the bar tonight,” Stuckless, who uses they/them pronouns, posted on Facebook, alongside photos and video footage of the incident. “His bodyguards herded me out. The event organizers were happy to see me go.”

Reflecting on what transpired, Stuckless said they felt moved to speak up on behalf of all the “voices that have been silenced over so many years,” referring to the #MeToo movement that has swept through Hollywood and beyond. They added,

“I thought about the artists, the women, who were paralyzed by the same fear that I felt, surrounded by colleagues who were intimidated into a culture of silence and passivity. This room was a microcosm of our whole community. And I couldn’t sit there and let him laugh. So I spoke up.

“In some ways tonight was a horrible, painful reminder of the power a man like Weinstein holds even now. It was a reminder that even in this time of relative awareness it is hypnotically easy to be pulled into a culture of silence.”

In a statement to The Hollywood Reporter, Weinstein’s representative condemned the women’s behavior as “uncalled for, downright rude and an example of how due process today is being squashed by the public.” The rep added that Weinstein was merely “out with friends enjoying the music and trying to find some solace in his life that has been turned upside down.”

Meanwhile, officials at the Downtime bar stood by their decision to kick out those who confronted Weinstein. A spokesperson statement read,

“Please know that our goal at Downtime is to create an environment where everyone feels welcome. We respect the privacy of our patrons and event partners, and want to ensure that all guests are treated equally, with the same service and respect. In keeping with this goal, we made a decision that would allow the evening to continue as planned.

After Hour organizers, including the performer that was said to have invited Weinstein to the event, haven’t commented on what transpired Wednesday. But according to one of the performers, a male comedian named Andrew B. Silas, at least one of the organizers was aware that Weinstein was in attendance and specifically “asked performers not to mention” his presence during their sets.