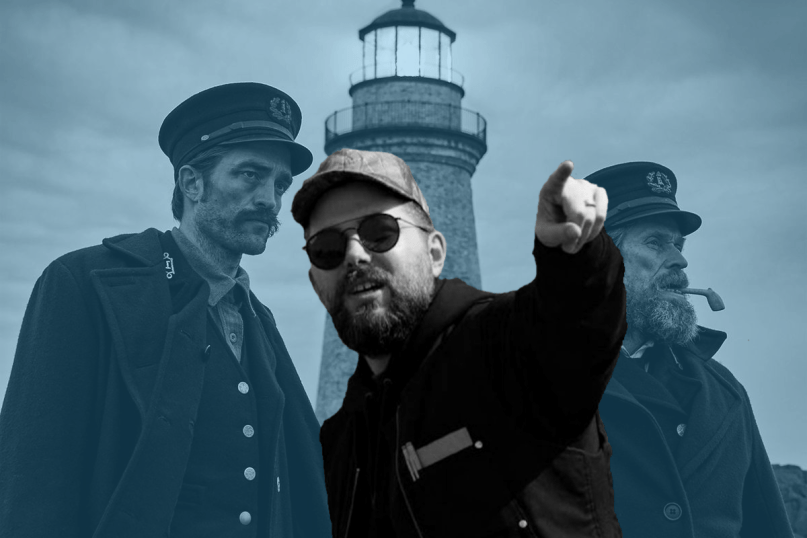 Roberts Eggers of The Lighthouse (A24_

The most cliche question you can ask a filmmaker is “Who are your influences?” But in the case of Robert Eggers, it feels impossible not to. Not only has the 36-year-old director sickened stomachs and tickled brains in his primal yet cerebral horror films The Witch and his latest The Lighthouse—he’s known just as much for the rigorous method of research that goes into his scripts. Perhaps a more apt question would be, “Who did you study?”

For the time being, Eggers has kept his narratives rooted firmly in the past, drawing from historical images and texts and going as far to construct the antiquated physical environments of each of his stories. For The Witch, that meant a rural farm in 17th-century New England (the writer-director grew up in New Hampshire, after all) and in The Lighthouse, that means … well, a lighthouse.

More specifically, a beacon mounted at Leif Ericson Park in Cape Forchu, Nova Scotia. Without spoiling too much, the titular structure plays home to two wickies (Willem Dafoe and Robert Pattinson) who have to tend to the titular structure all by themselves for an entire month, a period of time that soon grows longer due to a storm. Needless to say, things don’t go well for them.

Following The Lighthouse‘s surprise screening at this year’s Fantastic Fest, Consequence of Sound caught up with Eggers in an upstairs room of The Highball—a space that, coincidentally, is adorned with a series of creepy stained-glass windows, a pentagram, and an outline of a goat’s head. He promises it wasn’t his idea.

While the conversation started off with how his background in theatre informs his current work in film (he started as an actor and directed Shakespeare, in his words, “Off, Off, Off, Off, Off Broadway”), we quickly touched on everything from the construction of the lighthouse to how birds play into the mythology of his films.

On the intersection of film and theatre

Willem Dafoe and Robert Pattinson in The Lighthouse (A24)

When I think about certain collaborations between [playwright] Harold Pinter and [film director] Joseph Losey, they’re still cinema. I don’t think you could put Pinter and Losey’s The Servant with Dirk Bogarde onstage. I mean, you could. But it is cinema. At the same time, Pinter and Losey both know what a long dialogue scene can do. And there were ways in which I wanted The Lighthouse to have the feelings of their films, where it’s a little taste of a stage play, but still cinema. Because if you can’t have the storm in The Lighthouse, you can’t have the movie.

But certainly, as much as much as the film is based on folklore and Melville and classical mythology, I wouldn’t be the first person to say that there are theatrical traditions that this is based upon. The “what, what, what” scene is a fucking Meisner exercise.

On his research materials for The Lighthouse

There are too many to name, but obviously, I was going to read Moby Dick again. There’s no way I was not going to reread Moby Dick. And Sarah Orne Jewett is a Maine-based author who would [conduct] interviews during the time when the film takes place. She would interview farmers and sea captains and fishermen and write her Maine stories in dialect phonetically. Her work became massively helpful in creating the language for my brother and I, who wrote the script with me. She gets a big shoutout in the end credits

But even a photograph of a lighthouse station can influence the story. As simple as it sounds, seeing an old boathouse with a boat launch inspired the scene with the boathouse and the boat launch.

On building a lighthouse from the ground up

The exterior lighthouse that you see on location—on Cape Forchu—is just a facade. The beacon up top—the lantern room—was functional, but we had an electric device to turn the lamps off and on to the exact setting. But it was small. It wasn’t the massive contraption you see in the film. It’s scaffolding that was drilled into the rock with a brick facade, and then the beacon up top was done practically.

But the interior tower was done onstage, or rather, in an extremely tall warehouse. Because the interior tower is only eight feet in diameter. So we needed to be able to remove wall panels so we could put our camera in there. All of the interiors were very much designed to be shot in. Even the furniture was made to work within our very specific aspect ratio.

And then, of course as you can imagine, the layout of the lighthouse station on the island was a combination of what made sense functionally for a real lighthouse station, and then what looks nice to shoot. We kept arranging things so that we could shoot the cliffs, which are very dramatic. But I actually wish that we saw the sea even more. I think sometimes it feels like we cheated the location, but we really didn’t! I swear, we actually shot there.

On whether or not he’s afraid of birds

If you’re not afraid of seagulls and ravens, you’re kind of foolish. But I don’t have a bird phobia. It’s just that the raven is part of The Witch‘s mythology and the seabirds are part of this mythology. In other traditions, a raven is a positive animal. With The Lighthouse, Samuel Taylor Coleridge certainly helped us out with his albatross. But I didn’t know that the reason you’re not supposed to kill a seabird is because [they contain] the souls of sailors which were lost at sea. “Bad luck to kill a seabird…”

On his love—or ambivalence—for the sea

I don’t like the beach. But this ain’t the beach, exactly. Everyone’s drawn to the sea to some degree, but no, I’m not a sailor. I don’t have the greatest sea legs. I can’t tie knots. But just being from coastal New England, the sort of romance, both in a positive light and a negative light—the romance of the lighthouse was part of one’s consciousness.

On why he’s drawn to bygone eras

Anya Taylor-Joy in The Witch (A24)

My whole approach comes from research, so if I can’t do that, then I don’t have anything to do. And for whatever reason, I’ve always been interested in the past. One small reason might be that my grandpa used to collect antiques and we used to go to a lot of antique stores—something about these objects and thinking about their history and who held them and what they were doing with them. Thinking about those worlds is just enjoyable for me. And then it’s super-enjoyable to actually be able to build something, even if it’s a Puritan farm or a lighthouse station. How incredible is it that I get to live in my own little Disney World while we’re shooting the thing?

On if he’ll ever set a film in the future

Willem Dafoe in The Lighthouse (A24)

I’m not going to say no. But on the other hand, I feel like part of why I like the past is…of course the United States gets a lot of criticism for having a lot of religiosity, but certainly in the world of the Brooklyn hipster intelligentsia that I’m in, it feels like we live in a very secularized society. So part of why I also like the past is to talk about things that are bigger than us. Mythology, folklore, religion. I feel like science fiction…those are the stories where most people today are trying to ask questions and deal with things that are bigger than us. Challenge our current philosophies. So I feel like I like carving my own little path going backward because it speaks to me. That’s not to say I’m not interested. But I feel like a lot of people are already doing that.