Ozzy Osbourne Launches a Miraculous Comeback with Blizzard of Ozz 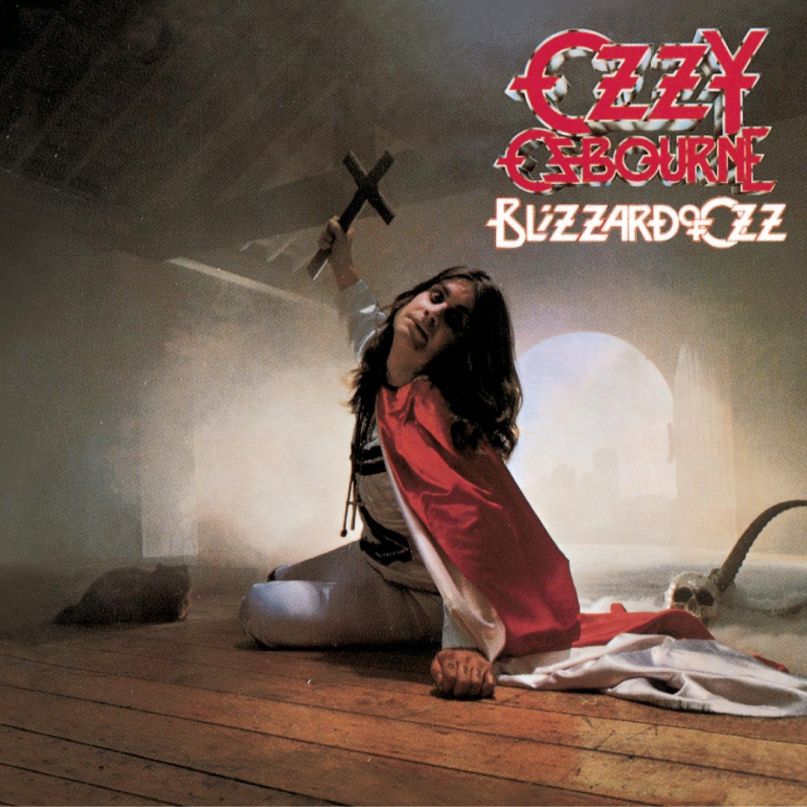 Next year marks the 40th anniversary of Ozzy Osbourne’s groundbreaking debut album, Blizzard of Oz. To celebrate, you can preview or stream music from Ozzy Osbourne here. Bonus: We’re also giving away his new career-spanning vinyl box set, See You on the Other Side.

Ozzy Osbourne was out in the storm and seeking shelter.

Black Sabbath had stormed boldly into the 1970s with the thunderous one-two punch of their eponymous debut album and its chart-topping, multi-platinum follow-up, Paranoid. But the ensuing decade had left the heavy metal pioneers physically and creatively crippled — particularly Osbourne, the group’s mouthpiece and partier-in-chief. Following the back-to-back critical and commercial failures of 1976’s Technical Ecstasy and 1978’s Never Say Die!, Sabbath dismissed Osbourne in 1979 on the grounds that his drinking and drug use had become irreconcilable — no small claim for a band with a Herculean collective drug habit.

Dejected and terrified of his future prospects, Osbourne sloughed off to West Hollywood’s Le Parc Hotel to drink, snort, and fuck himself into oblivion before embracing has-been status at the tender age of 30. But Sharon Arden, daughter of Black Sabbath’s manager, Don Arden, and future Mrs. Osbourne, had different plans. The plucky entertainment mogul made the disgraced singer a proposition: Put your life back together, and we’ll manage you.

Arden’s offer got Osbourne back on his feet and set the gears in motion for one of the most unlikely comebacks in rock history. Backed by a new all-star band — including once-in-a-generation guitar hero Randy Rhoads — Osbourne would rocket back to stardom with his quintuple platinum solo debut, 1980’s Blizzard of Ozz, defining a new decade of heavy metal just as he had previously done with three other blokes from Birmingham, England.

Osbourne originally wished to recruit ex-Thin Lizzy axman Gary Moore for his new band, but he proved difficult to nail down. The singer eventually filled the role with Rhoads, the 22-year-old Quiet Riot alum from Santa Monica. Diminutive in stature, soft-spoken, and largely abstinent from drink and drugs, Rhoads seemed the antithesis of Osbourne’s hard-partying caricature. But the hotshot guitarist consummated their union as soon as he cranked his Gibson Les Paul through his Marshall amp and blazed through some warm-ups. “Even in my drunken, stoned-out stupor, I go, ‘This is fucking one of the best things I’ve ever heard in my life, or these drugs are really good!’” Osbourne said of Rhoads in 2014.

Shortly thereafter, Osbourne enlisted Rainbow bassist Bob Daisley, and the three decamped to Rockfield Studios in Wales to write the bulk of Blizzard. Details on individual authorship remain murky, though Daisley maintains Rhoads wrote the bulk of the riffs while he contributed most of the lyrics, just as Sabbath bassist Geezer Butler had. His assertion seems credible, given Osbourne’s tendency to wander off to nearby pubs in the middle of the day — and considering the kernels of several Blizzard licks can be heard in Rhoads’ Quiet Riot work. Nevertheless, the trio banged out the album tracks quickly, and after onboarding former Uriah Heep drummer Lee Kerslake, the quartet retreated to Ridge Farm Studio in rural England in early 1980 to commence recording Osbourne’s comeback album.

From the first notes of album opener “I Don’t Know”, it was clear Blizzard of Ozz wasn’t your mama’s — or pot-smoking older brother’s — Ozzy record. Rhoads’ trebly, rapid-fire riff slices through the resounding gong, and as Daisley and Kerslake drop in with their punchy drum-and-bass fill, the whole affair sounds positively poppy compared to Sabbath’s high-octane funeral dirges. Osbourne holds up his end of the bargain, lamenting in his nasal howl about people who regard him as a prophet or preacher when all he’s ever claimed to be is a singer in a heavy metal band. It’s a lucid statement that would establish the dichotomy of Osbourne that endures today: the mythical, hell-raising Prince of Darkness versus the buffoonish everyman just trying to enjoy the ride.

Be sure to listen into The Opus: Blizzard of Oz when it launches October 24th with host Andy Bothwell, aka Astronautalis. Never miss an episode by subscribing now. You can also revisit a selection of Ozzy Osbourne’s best tracks via all major streaming services.

Much of the controversy surrounding Blizzard of Ozz would stem from a misunderstanding of that dichotomy. When 19-year-old John McCollum shot and killed himself on Oct. 26, 1984, while reportedly listening to Blizzard, his parents sued Osbourne and CBS Records, alleging the song “Suicide Solution” had encouraged the teenager to take his own life. Osbourne denied culpability and insisted “Suicide Solution” was a cautionary tale inspired by AC/DC frontman Bon Scott, who died of acute alcohol poisoning on Feb. 19, 1980. (The case was eventually dismissed in 1988.) Daisley, however, asserts he wrote the song about Osbourne, who could have easily followed in Scott’s footsteps. Wherever the truth behind the lyrical inspiration lies, one thing is certain: “Suicide Solution” is a sinister, swaggering piece of pop-metal that countless rock bands would imitate throughout the ‘80s, including Ozzy acolytes and future tour-mates Mötley Crüe on the lumbering Shout at the Devil single “Too Young to Fall in Love.”

Osbourne also helped popularize a slightly less savory convention of ‘80s metal with the prototypical power ballad “Goodbye to Romance”. Written as a send-off to his old band (and, he thought, his entire career), it features one of the singer’s most tender performances and plaintive set of lyrics. The sparse instrumentation keeps the song from lapsing into melodrama, and Osbourne sets a bar for sincerity that his poofy-haired progeny would rarely meet.

“Goodbye to Romance” contrasts starkly with its preceding track and Blizzard of Ozz’s defining single, the Top 10 hit “Crazy Train.” Forty years of praise and retrospective analysis have had a desensitizing effect, but try listening to “Crazy Train” with fresh ears and you’ll hear a master class in writing a perfect metal anthem. Osbourne’s paranoid screeds against manipulative politicians and fears of nuclear annihilation could just as credibly reflect his precarious mental state at the time. Ultimately, it doesn’t matter, because the song’s universal chorus — “I’m going off the rails on a crazy train!” — transcends geographical confines and personal circumstances.

All of this is before Rhoads’ solo, which, like every solo on Blizzard of Ozz, helped redefine the medium by fusing classically-inspired shredding with muscular pentatonic riffs and licks. The scope of Rhoads’ influence is often mentioned in the same breath as Eddie Van Halen, and rightfully so. But the two are radically different players: While Van Halen made two-handed tapping a fixture of hard rock guitar (which many two-bit shredders would ape unsuccessfully over the years), Rhoads merely incorporated the technique into his vast trick bag. And while Van Halen’s under-appreciated rhythm work showed a deep veneration for the blues, Rhoads’ rhythm tracks often sounded gloriously unhinged, as if he could careen off the beat and derail the song at any moment. Although Rhoads was born less than two years after Van Halen, he sounds like a decidedly younger player on Blizzard of Ozz than Eddie does on Van Halen’s eponymous debut.

That’s not a swipe at Rhoads, either. His harmonic squeals and chromatic shredding give Blizzard a crackling, youthful exuberance, while he deftly alternates between late-‘70s bar rock boogie on porno-guilt anthem “No Bone Movies” and neoclassical acrobatics on the hagiographical “Mr. Crowley.” Osbourne later confessed that with Blizzard, he considered himself to be competing against his old bandmates, who had rebooted Black Sabbath with the golden-piped Ronnie James Dio at the helm and released the excellent Heaven and Hell five months earlier. Yet, Heaven and Hell sounds like Black Sabbath looking inward and morphing into another version of itself, whereas Blizzard of Ozz captured the zeitgeist of ‘80s hard rock — largely thanks to the partnership of Osbourne and Rhoads.

That partnership was cut tragically short when Rhoads died in a plane crash in 1982 at 25 years old, just four months after Osbourne released his sophomore album, Diary of a Madman. Rhoads had already made incredible strides in the year since Blizzard of Ozz dropped, as evidenced by Madman’s labyrinthine title track, and it’s tantalizing to think of what he would have achieved in five, 10 or 20 years. But it’s also no secret that Rhoads had grown tired of the confines of heavy metal and wished to go back to school to study classical guitar. Those ambitions can be heard on “Dee”, Rhoads’ brief classical showcase on Blizzard. Even at 22, the ace guitarist had already begun to outgrow the subgenre he helped pioneer.

At least Rhoads gifted us Blizzard of Ozz, which remains a touchstone of ‘80s metal and crystallized one of the greatest singer-guitarist duos in rock history. The album reinvented Osbourne as a superstar and proved his knack for recruiting master collaborators; call him a heavy metal DJ Khaled. (Or don’t, ever.) Yet for all the album’s might, Osbourne and his bandmates would not fully realize the potential of Blizzard’s songs until taking them on the road, as demonstrated by the 1987 live album, Tribute, culled mostly from gigs throughout 1981. In the Tribute liner notes, Osbourne honors his fallen friend and musical soulmate in a way that only he could: “It’s like Randy was with me for a lot longer than he actually really was. Sometimes I think he’s still with me now. Guitar players have a thing where their guitars are an extension of their penis. With Randy, he was an extension of his guitar. There’s a big difference.”