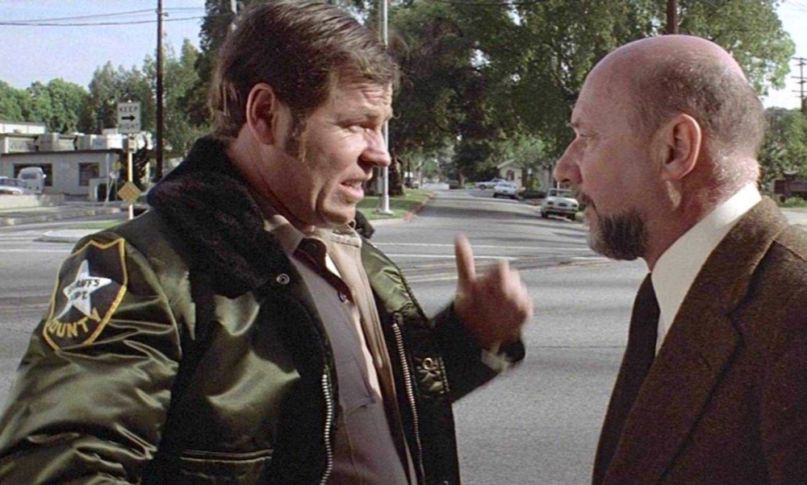 Everyone’s entitled to one good scare, so says Sheriff Brackett in John Carpenter’s Halloween. Well, how about two? Or, rather, make that three? Such is the case for veteran star Charles Cyphers, who will return to police Haddonfield, Illinois in David Gordon Green’s forthcoming sequel Halloween Kills.

This morning, Twitter account Halloween Fans posted a photo that shows Cyphers on set with a Brackett name tag affixed to his uniform. Now, whether or not that means he’s still Sheriff remains to be seen. However, seeing how his name was never mentioned in last year’s reboot, it’s probably unlikely he has that position anymore.

Cyphers returning to the franchise isn’t exactly surprising. A few months ago, Halloween III: Season of the Witch star Tom Atkins let it slip that his buddy “Chuck Cyphers” was heading back to Haddonfield, so this appears to confirm that name drop. He’ll be in familiar company, too, seeing how he joins OG stars Jamie Lee Curtis, Kyle Andrews, and the recently announced Nancy Stephens, who will reprise her role as Marion Chambers.

Nostalgia is certainly fueling the next two installments in this Blumhouse reboot. If you recall, Anthony Michael Hall was cast to play an adult Tommy Doyle and Robert Longstreet followed that casting as his former rival bully Lonnie Elam. What’s more, if you’ve been following the behind-the-scenes shoots, it appears there are going to be several flashbacks to 1978, and Haddonfield Memorial Hospital will also make an appearance.

Cyphers last appeared in the franchise in 1981’s Halloween II for a bit role. He more or less learns about the death of his daughter Annie, before exiting stage left. In 1988’s Halloween: The Return of Michael Myers, we learn his character left Haddonfield for the sunny confines of St. Petersburg, Florida. All of that is no longer canon in what is now easily the most confusing horror series outside of Twin Peaks.

(Ranking: Every Halloween Movie from Worst to Best)

As previously reported, Blumhouse has dated the final two Strode-Myers sequels for October 16th, 2020 and October 15th, 2021 with shooting to begin after Labor Day. Once again, the Master of Horror himself John Carpenter will executive produce alongside McBride, Curtis, Green, and everyone else at Blumhouse. Although not officially confirmed, Carpenter told Consequence of Sound last December that he’s ready to score again.

Stay tuned as this continues to unfold. In the meantime, you can revisit the first season of Halloweenies. Last year, the podcast series sliced through each and every Halloween movie, leading all the way up to the reboot.