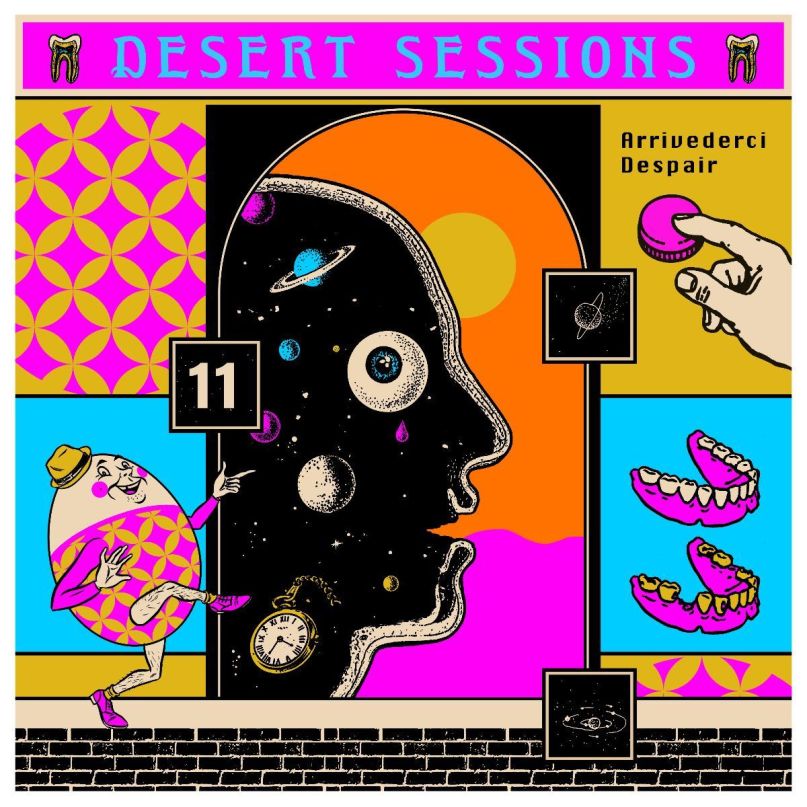 The Lowdown: Josh Homme is one busy gentleman. It seems like whenever he has some free space on his desk planner, he is quick to fill it with one of his many projects: Queens of the Stone Age, Eagles of Death Metal, Them Crooked Vultures, or the on-again/off-again Desert Sessions.

Homme bills the latter as a “music collective” that goes back all the way to 1997, when Homme and some pals congregated at the studio Rancho De La Luna in Joshua Tree (Vol. 1 dropping in November of that year). Over the years, a variety of well-known singers and musicians have been involved: PJ Harvey, Dean Ween (Ween), Josh Freese (The Vandals), Ben Shepherd (Soundgarden), and Mark Lanegan (Screaming Trees/QOTSA), among others. However, with their last offerings (Vols. 9 & 10) issued way back in 2003, it appeared as though the project had been permanently dismantled.

However, this year, school is surprisingly back in session for Desert Sessions, with the arrival of Vols. 11 & 12. The game plan for the Desert Sessions has always been to come up with music on the spot, with input from a variety of guest players. And this time, the likes of ZZ Top’s Billy Gibbons, Primus’ Les Claypool, Scissor Sisters’ Jake Shears, Warpaint’s Stella Mozgawa, and Royal Blood’s Mike Kerr all lend a hand.

The Good: Although supposedly composed then and there, the songs are fully realized and impressively not half-baked. The opening tune, “Move Together”, features a barely recognizable lead vocal by Billy Gibbons (sung in a Prince-like falsetto!), the Libby Grace-sung “If You Run” contains some simply sublime vocal melodies, and the Jake Shears-sung “Something You Can’t See” possesses a decidedly dreamy vibe.

Also, for those jonesing for new Queens, two tunes hit the mark: “Noses in Roses, Forever” and “Crucifire”. The former contains a similar bouncy rhythm akin to Queens classic “I Sat by the Ocean” (with Homme handling lead vocals) while the latter bears a bit of a resemblance to two rapid-fire Queens tunes, “Go with the Flow” and “Head like a Haunted House” (although Mike Kerr, not Homme, sings here).

The Bad: One contributor who appears to get lost in the shuffle is Les Claypool. It would have been interesting to have heard a lead vocal by ol’ Les (but then again, who knows, maybe he is the mysterious Töôrnst Hülpft on the lighthearted “Chic Tweetz”). And if you’re expecting to hear Les’ trademark slap-funk bass work a la Primus, he opts to play it pretty straight here.

The Verdict: With quite a lot of mainstream rock lacking any kind of organic vibe whatsoever — both creatively (too much reliance on songwriting consultants) and sonically (sometimes so non-human that it sounds like a bunch of C-3PO’s playing) — the sound of a collaboration remains a refreshing and wonderful thing. In fact, perhaps the best way to describe the material included on Vols. 11 & 12 would be to borrow the title of a long-running magazine devoted to Led Zeppelin: “tight but loose.”

Essential Tracks: “Move Together”, “If You Run”, and “Something You Can’t See”