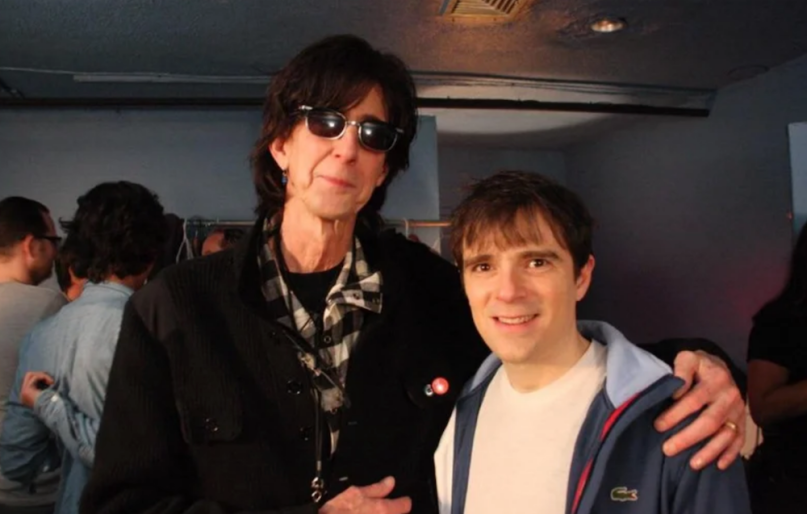 The Cars frontman and legendary producer Ric Ocasek suddenly passed Sunday at the age of 75. Artists far and wide have since taken to social media to offer heartfelt tributes to the new wave legend, including Weezer, The Killers, Courtney Love, Billy Corgan, and Nile Rodgers. The Hold Steady, El-P, Billy Idol, and The New Pornographers have also shared their touching sentiments.

“The Weezer family is devastated by the loss of our friend and mentor,” a post on Weezer’s Twitter account reads. “We will miss him forever, & will forever cherish the precious times we got to work and hang out with him. Rest in peace & rock on, Ric, we love you.” Ocasek famously produced three records for Rivers Cuomo & co, most notably their 1994 breakout debut, The Blue Album.

The weezer family is devastated by the loss of our friend and mentor Ric Ocasek, who passed away Sunday. We will miss him forever, & will forever cherish the precious times we got to work and hang out with him. Rest in Peace & rock on Ric, we love you. #RIPRicOcasek #karlscorner pic.twitter.com/JcTXevr6V8

The Killers’ honored Ocasek by writing, “Feeling grateful for Ric… My first king.” Frontman Brandon Flowers, who inducted Ocasek into the Rock and Roll Hall of Fame in 2018, also shared an email he’d sent to Ocasek a few years ago, praising him and the legacy of The Cars. “I just wanted to reach out and make you aware of my gratitude for you and your band’s contribution to my life,” read that email.

Flowers’ 2018 Rock and Roll Hall of Fame induction speech for The Cars was just as gracious. “Over the years, The Cars have achieved what every kid who ever sweat it out in a garage dreamed of—including a young Kurt Cobain who chose ‘My Best Friend’s Girl’ as one of his first tunes to learn,” Flowers remarked. “They achieved greatness and left a comet trail behind them, writing and recording songs that have transcended into classics.”

On Instagram, Courtney Love wrote, “I know all of the band Hole loved working with you, much love to your family… Cars were one of the great bands.” Meanwhile, Nile Rodgers highlighted Fireball Zone, the 1991 Ocasek solo album which he helped co-produce.

In his lengthy remembrance, Billy Corgan expressed his admiration for Ocasek’s “originality, flair, and brilliance,” adding, “It’s hard to share the measure of a man in so few words, because, despite his greatness, Ric was open and down to earth in a way that surprised me.” Cordan produced Ocasek’s 1997 solo album, Troublizing.

Check out the tributes below, followed by Weezer’s cover of The Cars hit “Just What I Needed”.

#ripricocasek We had a lot of fun making the album #FireballZone. This was one of my fav songs #TouchdownEasy. Though it was the 90's we'd not gotten the memo. It's super 80's but cool. https://t.co/ptSdrIHqBA pic.twitter.com/vGL1odM0TL

I will never stop imitating the first Cars album. His influence will always stay with me. RIP and Thank You to Ric Ocasek.

the label i founded,years ago,had the honor of putting out a song by the great @rjd2 with the legend Ric Ocasek https://t.co/xOWIC7y8pW

Our walkout: “Since You’re Gone”.