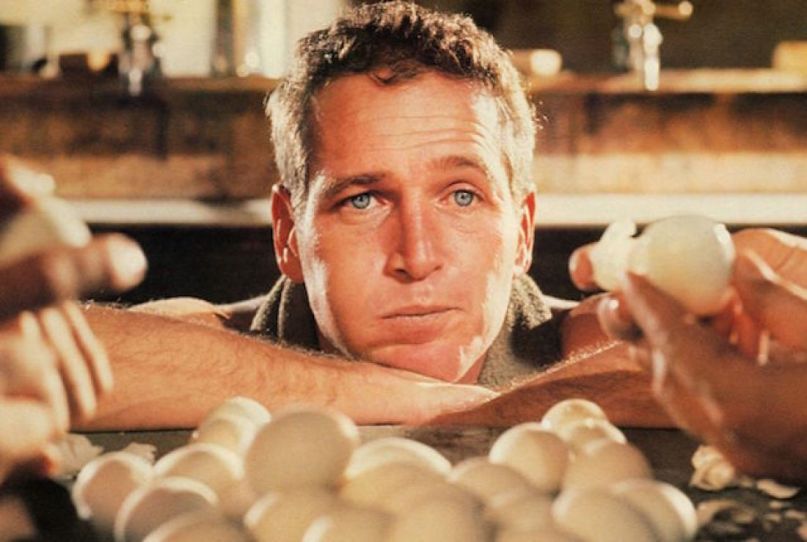 [Editor’s Note: This article was originally published as Cool Hand Luke turned 50. Today, we look back at its connection to One Flew Over the Cuckoo’s Nest as Ratched debuts on Netflix.]

Music, Movies & Moods is a regular free-form column in which Matt Melis explores the cracks between where art and daily life meet. This time, he celebrates 50 years of Cool Hand Luke by looking back at some of cinema’s great “world-shakers.”

Stuart Rosenberg’s Cool Hand Luke turned half a century old earlier this week. Even if you haven’t seen it, you know the film’s most famous line: “What we have here is … failure to communicate.” Surprisingly, that’s not star Paul Newman’s dialogue. It’s spoken by Luke’s fiercest adversary, the toady road prison captain, in a grating, weaselly Southern sneer, not a hint like Newman’s own stoic, golden tone. But that’s the unlikely Cool Hand Luke line that somehow endures. And it’s been borrowed, butchered, and paraphrased, to one degree or another, by bosses, principals, and sports coaches ever since. Basically, anyone who has final say over others.

Most people I know haven’t seen Cool Hand Luke. It was among the first breaths of New Hollywood and, by comparison, never quite got revisited or rerun on television like many lesser films by better-known filmmakers than Rosenberg. For those who are unacquainted with Luke and Dragline (George Kennedy), the box, or even “Lucille,” I point them towards Miloš Forman’s liberal adaptation of Ken Kesey’s One Flew Over the Cuckoo’s Nest (1975). It’s practically the same film, I tell them. Swap out a road prison for a loony bin, inmates for patients, and redneck bosses and a captain for black orderlies and a Big Nurse. Clearly, R.P. McMurphy (Jack Nicholson) and Louise Fletcher’s Nurse Ratched – ever so similar to “hatchet” – had their own communication issues. Nothing a lobotomy couldn’t solve, though.

If someone hasn’t seen Cool Hand Luke or Cuckoo’s Nest, I assume they’ve seen The Shawshank Redemption (1994). If not, I figure this person doesn’t own a television. You can fall asleep to Frank Darabont’s prison classic on one cable channel and wake up to it two hours later on another and not miss a beat. Now, start making the same types of swaps – Dragline for Red (Morgan Freeman), the box for the hole, Lucille for Rita Hayworth – and you’ll see just how similar all these movies are. It’s plug-and-chug storytelling, but all three films, which I discovered and fell in love with in reverse chronological order, are among my favorites of all time, as are the three main characters: Luke Jackson, Randle Patrick McMurphy, and Andy Dufresne (Tim Robbins). All “natural born world-shakers,” as Dragline would tell it to the rest of us “stupid mullet heads.”

That’s not to say Luke, Mac, and Andy are all that much alike. Luke’s a cool, likeable customer who can never seem to make a good thing stick – his heroic military service, a steady job, or a nice girl to settle down with — without the bosses of this world (and the next) crowding him. McMurphy’s a wild, gambling sex fiend who can’t help offending decent society and entangling others in his impulsive recklessness. And Andy’s an unflappable, determined introvert, the kind of man, as he explains to Red, who had to come to prison to become a crook. But all three characters share an elemental quality. In each shines a rugged spirit that can’t be broken, even when locked away for dead inside institutions that are specifically designed to break men’s spirits. And through their natural stubbornness and refusal to be anything less than free, they reveal the true wickedness and corruption at the very heart of their respective institutions, and they spark hope in places it had long ago been stamped out like an ember that floats out of a fireplace and lands on the living room carpet.

All these world-shaker movies tend to consist of three major types of plot points: miracles, retaliations, and, ultimately, crucifixions. By miracles, we mean moments in which the world-shaker’s actions cause walls to wither, bars to bend, and heretofore godlike “bosses” to stand there with their thumbs up their asses. For McMurphy, it’s hijacking a bus, stealing a boat, and taking the gang fishing after Nurse Ratched vetoed a ward vote to watch the World Series. Andy blasts Mozart across Shawshank’s prison PA system and earlier negotiates three beers per inmate on the tarring crew while the murderous Captain Hadley dangles him perilously from a rooftop. In Luke’s case, he takes a one-sided whipping in the boxing circle from Dragline, somehow downs 50 eggs in an hour, and, in one of the film’s best scenes, makes a game of the backbreaking job of tarring a long road and rallies the boys to finish the job with two hours of daylight left. “What do we do now?” one road crew member asks. “Nothing,” Luke smiles. “Oh, Luke, you wild, beautiful thing,” laughs Dragline, the men practically giggling at the thought of downtime with the sun still overhead.

And that’s what’s so powerful about these miracles. As Luke once tells Dragline, “I never planned anything in my life.” That’s not to say thought — and a great deal of it, especially in the case of Andy Dufresne — doesn’t go into certain actions the characters carry out, but the same instinct to spin Mozart to a prison audience, make believe the World Series is playing on a blank television screen, or race alongside a highway in the crippling Florida summer heat exists in all these men, these world-shakers. And the men alongside them, if only for a moment, can’t help but see the machinery of cruelty rendered out of order and briefly remember what it’s like to feel their souls stir with hope like free men.

Hope, of course, can be a dangerous thing, as Red warns Andy in The Shawshank Redemption. And it’s hope, more than anything, that the warden, the Big Nurse, and the road prison captain aim to snuff out because it makes men of circus mice. They stamp out that hope through Luke’s dreaded “rules and regulations,” soul-crushing, mechanical order, and, most despicable of all, the feigning of concern and suggestion that all of their actions, no matter how cruel, are really for the inmates or patients’ own well-being. When miracles do occur and hope makes itself known, the retaliation can take on many forms: a set of leg irons, a trip to the hole, or even, in McMurphy’s case, a heavy jolt of electricity to knock him out. Ultimately, there’s a breaking point, though, a moment when the unmasked visage of cruelty, revenge, and oppression appears and our world-shakers know that they aren’t long for their present situation. In Luke’s case, the breaking point was when the captain made him spend full days in the box rather than on the road gang because his mother had died, and they feared he might “get rabbit in his blood” and try to escape to her funeral. It’s punishment not for a crime committed but to prevent one — it’s terrifyingly Orwellian. “I’m sorry, Luke. I’m just doing my job. You got to appreciate that,” one of the bosses guiltily explains as he locks Luke up. “Nah, calling it your job don’t make it right, boss,” dismisses Luke. From that moment on, we know Luke’s time at the road prison will be short.

All three of these world-shakers have been studied as Christ figures. It’s really difficult not to see Luke in that light. In two separate moments, after the egg-eating contest and in the film’s final crane shot fading out, Rosenberg blatantly depicts him as a crucified Christ. The first shot shows the bunk clear out as an exhausted Luke lies with a sagging gut full of eggs on a wooden table, arms stretched out perpendicularly at his sides. The second imposes a smiling picture of a now-dead Luke over a crossroads the road gang is working, once again creating the effect of Luke on the cross. There are his miracles, of course; and while not a story about Jesus and a different outcome rendered, anybody can easily draw a comparison between Luke and Dragline’s boxing match and David and Goliath’s battle. Also telling are Luke’s multiple conversations with God, who he views as just another boss, especially in his final talk with God (who he calls “old man,” often a paternal term) in the church before being surrounded and shot by Godfrey, the boss “with no eyes.” In many ways, it reflects Christ asking if there could be some other way for his life to turn out. And, as expected, like most Christ figures, Luke dies a martyr’s death for his individualism and disobedience at the hands of a system that tolerates neither.

Andy Dufresne also registers as a Christ figure for many, and he definitely checks off several boxes. One he doesn’t adhere to, though, is death as a punishment for his crimes. Luke obviously gets shot by the law, and The Chief mercifully suffocates a lobotomized McMurphy, unable to stomach the thought of Mac living out his days as a slobbering, obedient vegetable. Now, some argue that Andy’s abandoned cell signifies Christ’s empty tomb and his new life in Zihuatanejo his ascension. However, it’s also worth noting the social context of these films. While all three stories relatively capture the same time period, they were all written and, more crucially, filmed at different times. Cool Hand Luke followed America’s escalated involvement in the Vietnam War, found itself at the climax of the American Civil Rights Movement, and wasn’t but a few years removed from the assassinations of John F. Kennedy and Malcolm X. In addition, Cuckoo’s Nest saw the death of Dr. Martin Luther King Jr. and Bobby Kennedy in the years before its filming. None of this is to say that these eras and events necessarily influenced the making of these films (though Cool Hand Luke often gets tied to Nam), but it is fair to note that when Rosenberg and Forman made their movies, the price for real-life world-shaking was often a violent death. Fast-forward to the comparatively calm mid-’90s, and it’s hard to imagine Darabont making a film in which his Christ figure dies by Hadley’s machine gun, even if Stephen King’s original story had called for it.

Regardless of whether they are gunned down, “castrated,” or get their little boat in a small Mexican town off the Pacific, world-shakers can’t go on shaking the world forever. Even Andy (aka Randall Stephens) simply wants to work on his boat and live out his life sentence in a place that has no memory. World-shakers appear out of nowhere, turn the world on its head, and often leave as quickly as they arrived. Routines and order soon return, and it’s tempting to believe that all their world-shaking didn’t amount to much in the long run. But then we see Dragline strangle Godfrey and knock his “eyes” off, watch Red breaking parole to see his friend once again, or witness The Chief do the impossible and hurl a giant marble fountain through a window and escape into the distance. It’s in these moments that we realize that world-shakers do more than just throw a temporary wrench in the works. They show oppression for what it truly is and the world for what it can be on its best days. In other words, Luke, Mac, and Andy leave us with something nobody can take away from us: hope.

Then it’s up to the rest of us to carry on with the world-shaking for a while.