Pearla shares a Track by Track breakdown of her Quilting & Other Activities EP: Stream 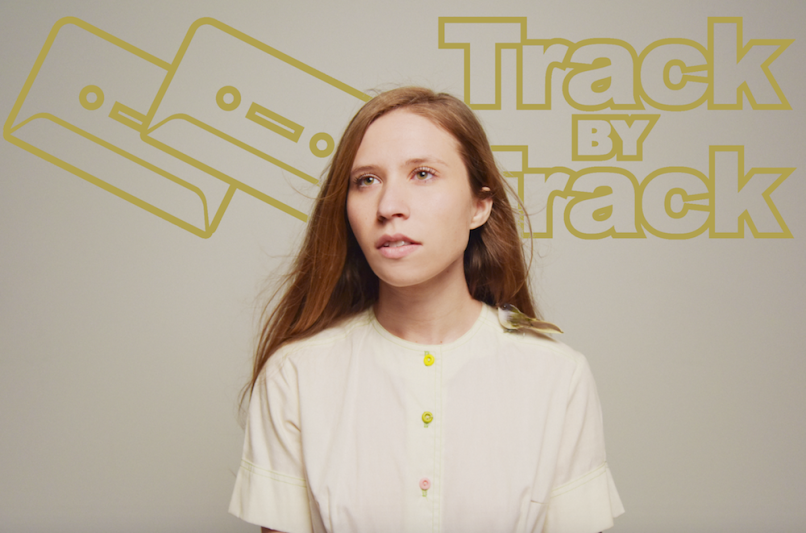 Track by Track is a new music feature that asks artists to take listeners deeper into each song on their latest release. Today, Brooklyn’s Pearla instructs us on Quilting & Other Activities, her debut EP.

Pearla is just one day away from dropping her debut EP, Quilting & Other Activities. Ahead of the September 6th release via Egghunt Records, the musician aka Nicole Rodriguez is today giving an advanced premiere of the six-track effort.

Rodriguez’s gentle compositions move like a funambulist walking the line between early Lady Lamb and Big Thief, but with a dash of whimsical experimentation. Chirping birds flutter around the ethereal notes of “Daydream”, while standout early single “Forgive Yourself” exits on a sine wave transmission from space. All the while, Pearla explores the messy tangle of her own emotions and experiences. “I trip on the same fucking rock every morning on the sidewalk when I leave,” she sings on the echoing closer “Washing Machine”. “Under a lamppost at the corner of Montrose and I’ll never learn how to look where I’m walking.”

Take a listen to Quilting & Other Activities in full below.

For more on what parts of herself she put into each one of the songs, Pearla has broken down Quilting & Other Activities track by track. You can also get more insight into “Forgive Yourself” — as well as its B-side, “Pumpkin” — by reading our Origins feature from last fall.

Quilting:
“Quilting” is about attachment and the addictive nature of comfort. It’s about coming out of a fog and facing yourself for the first time after spending too long wrapped up in others. The song is about me holding this belief that I should be enough for myself, but not being able to fully realize it. I wrote this after a breakup when I was finding it really difficult to be alone, though I knew in theory that is what was best for me. I think after you get your heart broken for the first time, something in you gets lost that you can’t ever get back. But when I wrote this song I became okay with that and realized that for everything lost there is something to learn and something to be gained.

Daydream:
This song is about clinging onto a memory until it becomes distorted in your mind, and turns into an attempt to escape the present. It’s a love song/denial song about monkeys, the fleetingness of joy and the lingering effects of pain. I wrote this right after moving to New York amongst many changes in my life and a brief stint working with primates. I realized the only way this city could be manageable for me is if I carved out a little universe inside of myself that felt steady and untouchable and protected it with all of my might. We tried to recreate this internal universe with the sounds of humming beetles, screaming baboons and clinking garden rakes.

Forgive Yourself:
I wrote this song while sitting in my backyard trying to meditate but failing because a bee kept flying around my face. I got frustrated with myself that I couldn’t stop reacting to the bee and then thought about all the situations in my life that were mirrored by this one. This song is about all of those little knee-jerk reactions that we have, and feeling things that we wish we didn’t feel sometimes. It’s about accepting these things and not faulting yourself for simply being human. I wrote this song to help practice a little more self-compassion.

Pear Shaped World:
I wrote this after I learned that the Earth is not a sphere but an oblong or pear shape. It made me think about all of the illusions and shapes that we live inside of, and how we often forget to zoom out and see things for what they are. This song is about wanting to feel grounded and present but realizing a tendency to hold onto things even as they are meant to pass us by. It’s about learning to let go.

Somewhere:
I wrote this song a long time ago with Jon Buscema as an electronic song, and there was this simplicity of it that always made me want to see what it felt like stripped down like this. I think when I recorded it originally it came from a big sense of anxiety, and feeling lost but hopeful. This version feels more reflective of where I am now; and it’s more saying that it’s okay to not always know where you’re headed and to not always have everything figured out.

Washing Machine:
“Washing Machine” is about this really loud sound in my apartment, (actually it was my air conditioner but I thought it was my washing machine the whole time) that became the backdrop for multiple events in my life. After this period of time, whenever I heard the sound, I felt a wave of those emotions all over again. It made me think about how we carry weight from the past everywhere we go in some way. I think my goal while writing the song was to disconnect the sound from the events, and try to get myself to leave certain things behind me. I recorded this on my iPhone in the room that the sound was coming from.