The box set includes a doctor's bag, band-aids, a prescription notepad and more 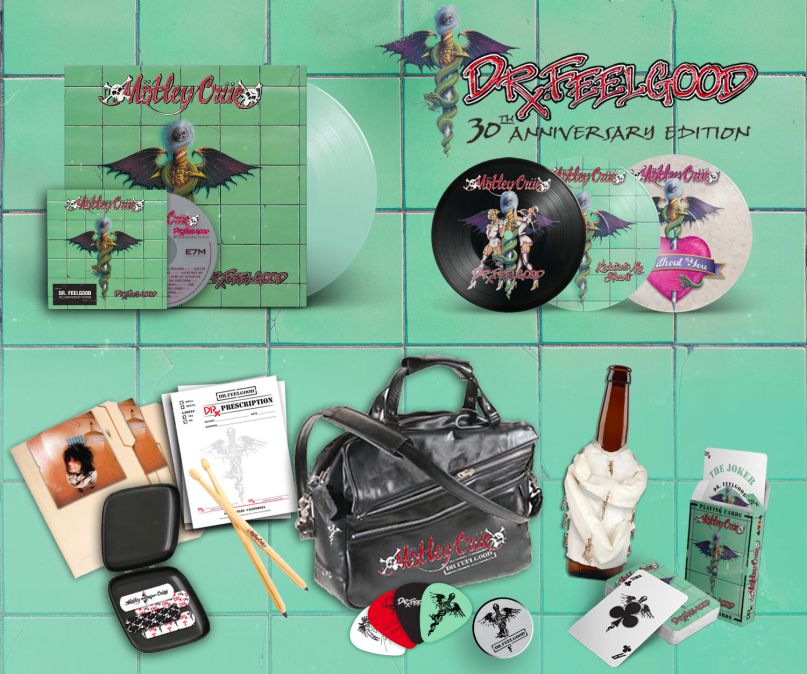 Mötley Crüe are celebrating the 30th anniversary of their most successful album with the release of a deluxe edition of 1989’s Dr. Feelgood this fall.

Dr. Feelgood has been certified six-times platinum in the U.S. alone, thanks to such hits as the title track, “Kickstart My Heart”, “Without You”, “Don’t Go Away Mad (Just Go Away)” and “Same Ol’ Situation (S.O.S.)”. It’s also Mötley Crüe’s only album to hit No. 1 on the Billboard 200 chart.

The album’s actual 30th anniversary occurred a couple days ago on September 1st, but the deluxe edition will arrive officially on November 29th.

In addition to containing the album on vinyl and CD (which are also available individually), a super deluxe box set priced at $200 will be stuffed with three 7-inch vinyl singles, a doctor’s bag, a deck of cards, a prescription notepad, drumstick pens, pins, guitar picks, band-aids, a straightjacket beer koozie, and more. Fans who order from the band’s official merch site also have the option to package the deluxe box set with a t-shirt, a hoodie, and a slip mat.

In a statement, bassist Nikki Sixx said of Dr. Feelgood, “After feeling robbed of a #1 album with Girls Girls Girls, the band was hell bent on topping ourselves on every level. bringing in Bob Rock to produce and push us musically and lyrically was just what the doctor ordered. … The band was clean, lean, and sober and this album has some of our proudest work.”

Mötley Crüe played their final show on December 31st, 2015, but were back in the spotlight earlier this year with the release of the biopic The Dirt on Netflix. Watch a promo video for the deluxe edition of Dr. Feelgood below.