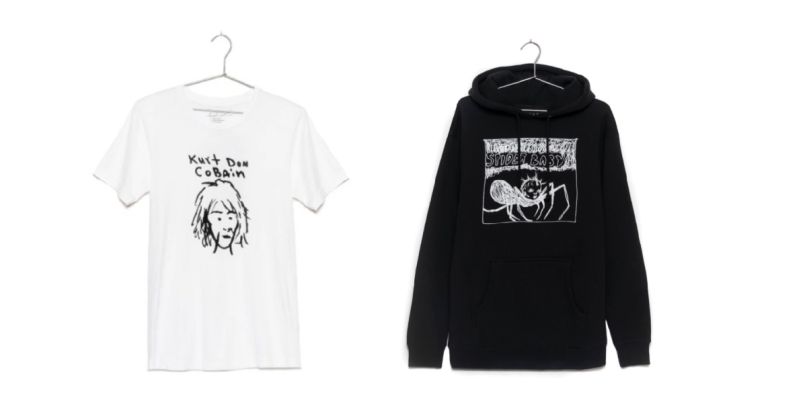 The End of Music, LLC, the business arm of Cobain’s estate, has teamed up with Live Nation Merchandise to launch a new line of apparel inspired by the late Nirvana frontman.

The “Kurt Was Here” collection features T-shirts, sweatshirts, and hoodies adorned with Cobain’s original artwork, sketches, and hand written notes, according to Rolling Stone. Each item in the collection was “designed under the creative direction” of Cobain’s daughter, Frances Bean.

The apparel will be available in limited quantities via Barneys in the US, Selfridges in the UK, and online via the newly launched KurtCobainShop.com. Some of the t-shirts go for as high as $113.

In a statement to Rolling Stone, a representative for Live Nation Merchandise said, “We believe that the importance of art is exceedingly potent in today’s social and political climate and that it is the right time to share this collection of Kurt’s work with artists, collectors and fans, allowing them to experience Kurt’s legacy in a new way, and collectively celebrate his lasting impact on the world.”

Bundle packages consisting of a t-shirt, limited edition screen print, and coffee table book will also be available for purchase.

For those on the budget, head to YouTube to watch Nirvana’s newly uploaded Live and Loud concert for free.