A mellow, minimalist rendition in support of their debut album 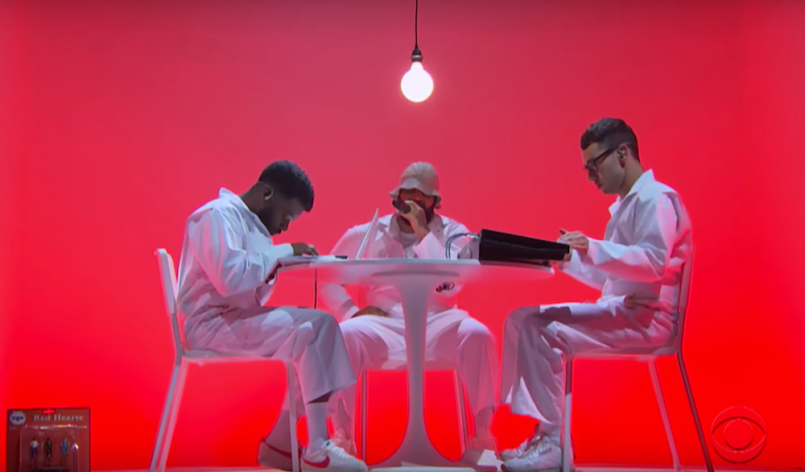 Red Hearse, the supergroup comprised of Jack Antonoff, Sam Dew, and Sounwave, served as the musical guest on Tuesday’s the Late Late Show with James Corden. In support of their self-titled debut album, which dropped just last month, they let loose lovelorn single “Everybody Wants You”.

As we’ve seen in previous performances and press photos, Red Hearse often prefer to keep things minimalistic and focused on the music — which makes sense considering their experience as all-star songwriters and producers. That was certainly the case last night, as all three spent the entire performance perched around a table, heads down and concentrated on their respective instruments. Even singer Dew only occasionally peeked out from under his bucket hat.

Watch the video replay below.

Red Hearse made their TV debut in July with a Tonight Show performance of “Half Love”. The trio currently has a pair of US dates on deck for September, and tickets can be purchased here.

Antonoff is best known as a member of Bleachers and .fun, as well as a pop mega-producer who’s worked with the likes of Lorde, St. Vincent, Lana Del Rey, and Taylor Swift. Hailing from Chicago, Dew has written for Rihanna, Mary J. Blige, and even Antonoff (on the T. Swift and Zayn collab “I Don’t Wanna Live Forever”). Sounwave, meanwhile, is the in-house production maestro of Top Dawg Entertainment, meaning he’s churned out dozens of tracks for label staples like Kendrick Lamar and ScHoolboy Q.